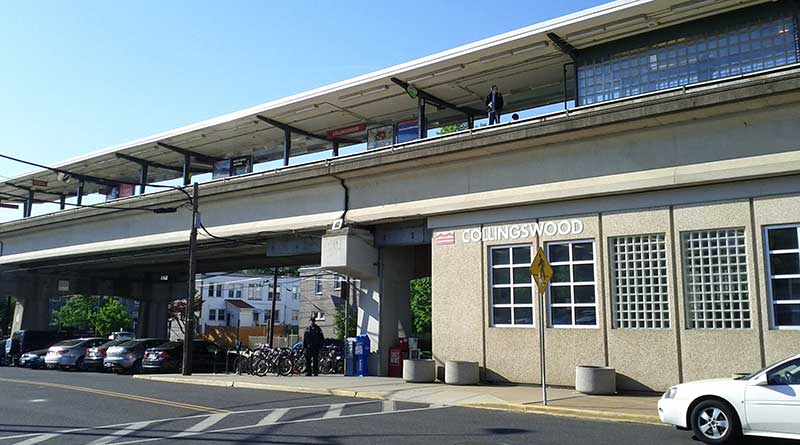 The borough, along with DRPA and its subsidiary, the Port Authority Transit Corporation (PATCO), issued a request for qualifications and expressions of interest (RFQ/RFEI) for a master redeveloper last spring. They received 15 responses, chose six to request specific development proposals from, and received four. Collingswood Community Development Director John Kane said some developers had difficulty following through on the process due to difficulties in getting financing. Companies that did submit RFPs were: Keating Urban Partners LLC/AMC Delancey (co-submitters), Trammel Crow Company, LCOR Incorporated, and The Commonwealth Group, Ltd. & Mid-City Urban LLC.

Following a review by DRPA, a period of public input will begin. The plan eventually chosen will have to be able to produce surplus revenue over and above the project’s expenses. Once chosen the winning team will move forward on design. Environmentally-friendly aspects of some plans include green roofs, solar canopies over parking structures, and green walls, which are basically gardens.

“The citizens are positive [about the project] but we haven’t shown any renderings of what the buildings would look like,” Kane explained. “The citizens have expressed concern about the height and the mayor in our public meetings has said it’s just not in the cards to go high.”

The area in need of redevelopment is situated between Lees and Homestead Avenues, between Haddon Avenue, the borough’s main thoroughfare, and the PATCO station, which is located in the median between North Atlantic and South Atlantic Avenues.

“We’re of the opinion, here in the town, that our infrastructure is good and that our schools have room and the result of these buildings will be that, as the support for them gets done—the streets and the curbs and the parking—that they’ll actually reduce taxes,” Kane said. Travel between Collingswood and Center City, Philadelphia, takes about 16 minutes. Nearly 1,800 riders board at Collingswood each weekday.

This project is the second of Collingswood’s efforts to promote transit-oriented development. The first project, The LumberYard, will ultimately consist of 119 residential and 19 commercial units. Despite a delay in the completion of The LumberYard caused by the economic downturn, the first building is complete and fully occupied. Work is underway on the second LumberYard building. All of the concrete work has been completed on building, which is as long as two football fields. Two underground garages will be built during this part of the project, offering more than 400 new parking spaces in the downtown area. Some of these spaces will be used by building residents, while 132 spaces will be dedicated to public use.

The second and third phases of this project—a series of row houses adjacent to the PATCO High-Speed train line facing Atlantic Avenue—are still being completed. The end date for the $54 million redevelopment project has not yet been determined.

In other news, in October Collingswood approved a resolution designating 765 Haddon Avenue as a redevelopment area. The local weekly Retrospect newspaper notes that the property, located about quarter mile from the Collingswood Station, is owned by TD Banknorth and served as a bank from 1905 until its closing June 2007. Mayor Jim Maley said there are parties interested in the property, which has a sale price of $900,000. None of the potential buyers are banks, however, necessitating the property’s redevelopment designation. The Retrospect also reports that as a redevelopment area the property is eligible for payment in lieu of taxes (PILOT) programs, modified zoning, and is subject to eminent domain.

Collingswood’s main thoroughfare, Haddon Avenue, which runs parallel to the PATCO High-Speed train line, was also named a Great American Street by the American Planning Association. According to the APA: “Haddon Avenue is a mixture of small town friendliness and larger city diversity. The tree-lined avenue with its historic buildings, wide sidewalks, town clock, period lamp posts, flower baskets, and pole banners captures the look and feel of late 19th and early 20th century small town America. At the same time, a more contemporary side to the avenue is making Collingswood one of New Jersey’s smart growth leaders.”