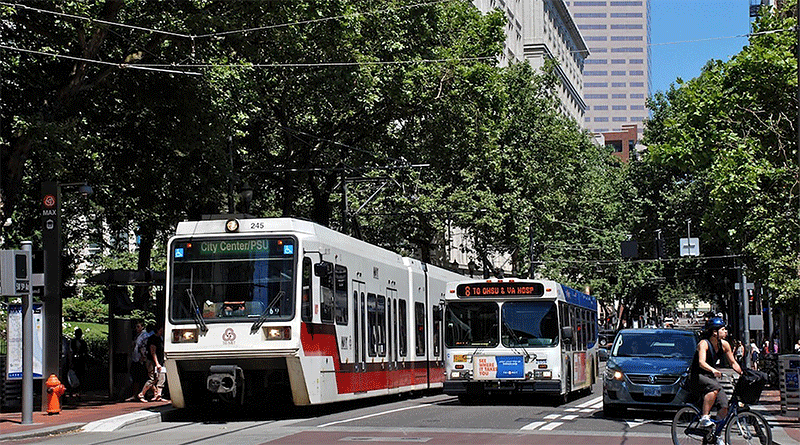 An inbound MAX train being passed by a bus on the Portland Transit Mall of TriMet, in Portland, Oregon. By Steve Morgan and licensed by CC BY-SA 3.0

Communities are Embracing Development near Transit:
A Snapshot of Transit-Oriented Development Support across the United States

A 2017 AARP report provides a snapshot of the policy and planning supports employed by state, regional, and local actors to support transit oriented development (TOD) from 2015 to 2016. Communities are Embracing Development near Transit builds on a Reconnected America study issued in 2010; the newer study suggests that the number and variety of TOD programs and policies at all levels of government have grown significantly.

The survey includes locations that have received federal transit capital or planning grants in recent years and areas served by the 25 largest transit providers in the U.S. In the areas surveyed, AARP found strong support for TOD across all levels of government. State support generally comes in the form of funding and financial incentives or by authorizing funding and financing tools at the local level. At the regional level, Metropolitan Planning Organizations (MPOs) provide guidance and technical assistance programs that encourage and support station area planning, while transit agencies engage in joint development efforts. Locally, counties and cities pursue TOD master planning, develop TOD design guidelines and zoning, and provide a variety of funding programs and financial incentives.

Given this wide array of actors, policies, and resources, successful TOD locations are those that are able to establish complex partnerships and funding approaches. They engage a broad set of stakeholders, including the private and philanthropic sectors, and foster buy-in among residents and taxpayers.

The report highlights the Atlanta BeltLine initiative as a prime example of effective coordination among a large number of public, private, and non-profit actors and deployment of a wide array of funding and financing mechanisms. The ongoing BeltLine initiative aims to develop parks, trails, transit, and new mixed-use neighborhoods connected by 22 miles of light rail along a historic railroad corridor surrounding the city. Because the project is so complex, a subsidiary of the City’s development authority was created for the purpose of overseeing the project management and revenue generation structure.

The report acknowledges that equity in TOD areas is a growing concern and that successful, newly constructed TOD has the potential to displace lower-income households, who are likely to benefit most from transit access. The report highlights a number of communities taking action to foster equity but does not apply the same robust survey of support for equitable TOD (eTOD) as it does for TOD generally. In any future iteration of the AARP study, a snapshot of the state of eTOD policies and programs would be a valuable resource for policymakers and stakeholders.

The current AARP snapshot is encouraging, but its focus on number and type of supportive measures does not capture the many challenges and setbacks facing TOD policies and implementation. Earlier this year, a California Senate committee rejected a bill that sought to address the state’s housing shortage by allowing increased densities around transit stops if developers meet inclusionary housing standards. Loss of local land use control as well as fears of gentrification drove opposition.

When enabling legislation is successfully passed, local actors may still struggle to implement. In 2017, the State of Tennessee passed legislation enabling public housing authorities to carry out transit-oriented redevelopment projects. In August 2018, the Nashville city-county council rejected an attempt involving the Metropolitan Development and Housing Agency (MDHA) to spur TOD development around the Music City Star commuter rail station. Council members voted down the proposal due to doubts over the funding mechanism and other concerns.