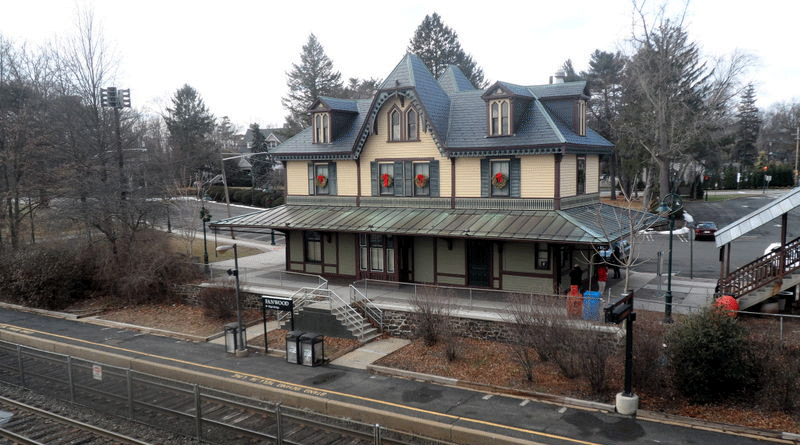 As a year-end holiday gift to residents, Fanwood’s Block 64 redevelopment project across from its historic train station is scheduled for completion. The plan to redevelop this area has been in progress since the early 2000s. Under four-term Mayor Colleen Mahr’s leadership, Fanwood has seen tremendous progress and increased its appeal as a transit-friendly place to live, and has garnered statewide acclaim for its present TOD efforts and plans for future development.

The Borough of Fanwood is located in southwest Union County, NJ, on NJ TRANSIT’s Raritan Valley Line, which connects Newark Penn Station and High Bridge. More than 960 riders board each weekday at Fanwood Station, located at the Borough’s center between North Avenue and South Avenue. Currently commuters change trains at Newark Penn Station to continue travel to New York Penn Station or Hoboken. In March 2017, NJ TRANSIT piloted a “one-seat ride” program on the Raritan Valley Line, offering weekday off-peak riders a direct route to NY Penn Station. This program was temporarily suspended in fall 2018 to accommodate NJ TRANSIT’s Positive Train Control installation, scheduled to be completed by the end of this year.

For nearly two decades, the Fanwood Borough Council has explored its redevelopment options. New residents are drawn to Fanwood for its family-friendly atmosphere and affordable housing prices, as well as its rail and bus access to Newark and Manhattan. In an effort to encourage this growth and stimulate a larger influx of residents to the area, the Borough’s leadership has actively built upon local transit assets to strengthen redevelopment efforts.

In 2000, the Fanwood Borough Council retained the planning firm of Abeles, Phillips, Preiss & Shapiro, Inc. to explore redevelopment options for portions of Block 64, a 6.5-acre block located to the south of Fanwood Station and bordered by South Avenue, Martine Avenue, La Grande Avenue, and Second Street. Site evaluation determined that properties within the block met the criteria necessary to declare the block an area in need of redevelopment due to prolonged vacancy, decrepit conditions, and absence of developer interest. The Preiss firm prepared a preliminary redevelopment plan in 2001 after former Mayor Louis C. Jung and the Council declared the downtown area officially “in need of redevelopment” under New Jersey statute 40A 12-6.

In 2004, newly-elected Mayor Colleen Mahr observed that “Fanwood had the basic elements for a town center, but no real growth or investment had been generated for over 40 years.” At that time, the Mayor and Council sought more public involvement for Fanwood’s redevelopment plan. The Borough conducted a public engagement program, using a NJ Office of Smart Growth Smart Future Transit Grant and with support from Schoor DePalma Inc. Data gathered from the engagement program informed  modifications to the initial plan, and resulted in its revision, officially adopted in 2005 as the Redevelopment Plan for Downtown Fanwood, Block 64. The stated goals of the plan were to create a mixed-use, walkable, community-oriented downtown, draw in private investment, increase housing opportunities, and facilitate a “transit village” environment.

Since 2005, the Block 64 Redevelopment Plan has undergone five revisions; the most recent version was adopted in June 2016. As a whole, changes from the original 2002 proposal, which incorporated input from the 2004 public outreach program, called for:

The redevelopment of Block 64 officially commenced in 2006 with the Marchovecchio and Ling complexes undergoing renovations that resulted in mixed-use residential and retail spaces. The construction of Fanwood Crossing I, II, and III followed between 2011 and 2016, at the tail end of the Great Recession. Fanwood Crossing I and II contain street-level commercial space with residential units above. Commercial tenants include Mara’s Café & Bakery (now Railside Café), Ivy Educational Services, a children’s toy and craft boutique, Be Craftful, and Seng Couture, a women’s formal dress shop. Fanwood Crossing III contains only residential multifamily units.

The Station Square apartment complex opened in fall 2018. Located at the corner of Second Street and La Grande, it contains 35 residential townhouse units, 7 of which are affordable COAH units to meet Fanwood’s obligation to provide affordable housing in New Jersey. The site lies on the former Dean Oil Site, which caused delays to the start of construction, as the site had to undergo remediation per the New Jersey Department of Environmental Protection. Landmark Companies invested $10 million in the construction of Station Square, including PILOT payments to Fanwood.

Additional work on Block 64 included renovations of the structures on Martine Avenue, encompassing multiple street-level retail and business spaces and Frank’s Auto Body Shop.  The last piece of the redevelopment work, 35 Second Street, will contain 2,900 square feet of commercial space on the first floor, and 3 luxury residential units above. It is scheduled to open in December 2018, finalizing the new construction and redevelopment of the buildings on Block 64.

The workshop highlighted regional redevelopment projects from along the Raritan Valley Line. Among the projects discussed were a planned 212-unit residential building and a five-story mixed-use building in Plainfield, a 70-unit residential building in Westfield, and a site in Garwood that will be remediated and redeveloped for 298 apartments and retail space. However, the showcase of the workshop was Fanwood’s Block 64 redevelopment efforts, which had earned a 2014 Smart Growth Award from New Jersey Future. Mayor Mahr recognized that “the rail station was a key component of that success” and “the charm of residential Fanwood combined with the local rail station were tremendous assets to build upon for an active and vibrant Fanwood.”

Fanwood has seen tremendous growth with its Block 64 redevelopment efforts, and the Borough’s development shows no signs of slowing down. An extension of the original Block 64 work has already been completed. The public plaza next to Railside Café was expanded with pavers to connect the rear entrances of the stores along Martine Avenue with LaGrande Avenue. The expansion creates easy customer access between the parking lot in the middle of Block 64 with Fanwood Station and other parts of the neighborhood. The Borough retained Najarian Associates to design and oversee the project, which included the installation of benches, planters, and trash bins and was finished in late spring 2018.

The next major improvement on the horizon for Fanwood is the South Avenue Transportation Infrastructure Development Project. In 2017, Fanwood received an $802,000 grant from the New Jersey Transportation Planning Authority (NJTPA) to improve the streetscape and transportation amenities along South Avenue. This work will include replacement of light fixtures, and installation of new bus shelters, benches, and bike racks along both sides of South Avenue.

Additionally, the entire South Avenue corridor within Fanwood municipal limits was rezoned in 2016 as a Commercial Corridor District. The corridor was officially designated an “Area in Need of Redevelopment” by the Borough in October 2018, allowing existing business owners to receive tax incentives if they conduct property improvements. A number of projects are currently underway in the new rehabilitation area.

Mayor Mahr believes that TOD is an excellent strategy for Fanwood because it “promote[s] employment by increasing residential opportunities near transit, provide[s] services, retail, and centers of place for the community as a whole. As a recognized component of smart growth and a sustainable low-cost solution to a host of problems ranging from housing affordability to traffic congestion, TODs encourage 24-hour communities for living, working and playing.” The likely return of the one-seat-ride program in 2019, although limited in scope, will provide a strong support for the continuation of Fanwood’s transit-oriented development plans.

Community groups have appealed to NJ TRANSIT for extended one-seat-ride service, especially during peak hours, but have been turned down due to the capacity limits of the Hudson River tunnels and track space at NY Penn Station. Leaders of Raritan Valley Line (RVL) municipalities, including Mayor Mahr in her position as co-chair of the RVL Mayors’ Alliance, continue to work with state legislators and push for improved access to Manhattan. However, even without a direct line into New York City, Fanwood, through the work of its Mayor and Council, has seen tremendous redevelopment work in the past 18 years, serving as a model for TOD work across New Jersey.

May 18, 2009 Steph_Admin Comments Off on Communities Advance Safe Streets to Transit Projects