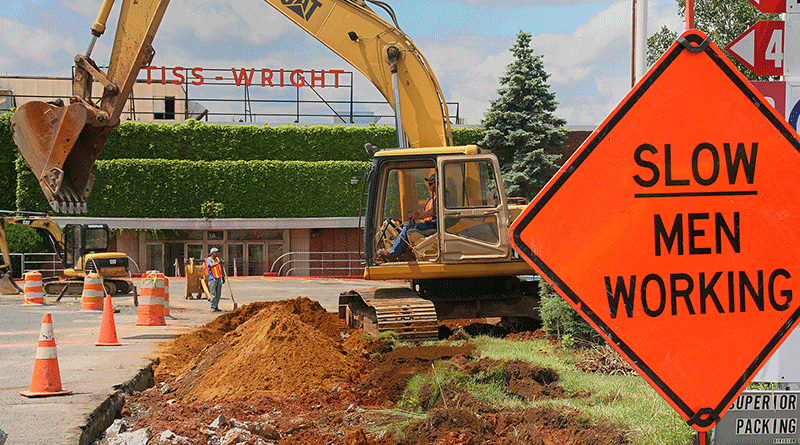 Somerset Development is preparing to build Wesmont Station, a new “Traditional Neighborhood” project in Wood-Ridge, NJ, that will ultimately be anchored by a new rail station on a 100-acre site near NJ TRANSIT’s Pascack Valley Line. Started in 2001, the project encompasses several land parcels, the largest being an 80+ acre former Curtiss-Wright engine plant that was left with substantial contamination when abandoned in the 1980s. Cleanup costs to date total over $27 million. The 36-acre former manufacturing building will remain on the site and function as an active warehouse facility. Other properties that make up the project site include a landfill, a vacant strip mall and a NJ TRANSIT maintenance-of-way (MOW) facility.

While much of this area has been remediated, activity continues in a few spots. Additional areas of contamination were found after much of the cleanup effort had been completed. The remediation of these areas continues under the supervision of the NJ Department of Environment Protection. When deemed safe, the developer will begin work on Wesmont Station, an extensive mixed-use community that will consist of over 700 new housing units, including detached single-family residences, townhomes, live-work units, condominiums and rental apartments featuring a variety of elevations. These new homes will be complemented by a town center with village retail and restaurants, an events plaza and a recreation complex. Finally, with the build-up of housing and formation of the central public and commercial area, Somerset Development will build a new community train station accessible to all borough residents. Walking paths, bikeways and green space will help to meld the new community within the existing town fabric. Municipal officials see potential increases of $350 million in assessed property values and $7.65 million in new property tax revenue once Wesmont Station is completed.

December 10, 2018 Stephanie DiPetrillo Comments Off on After Flood Protections, Bound Brook is Reborn