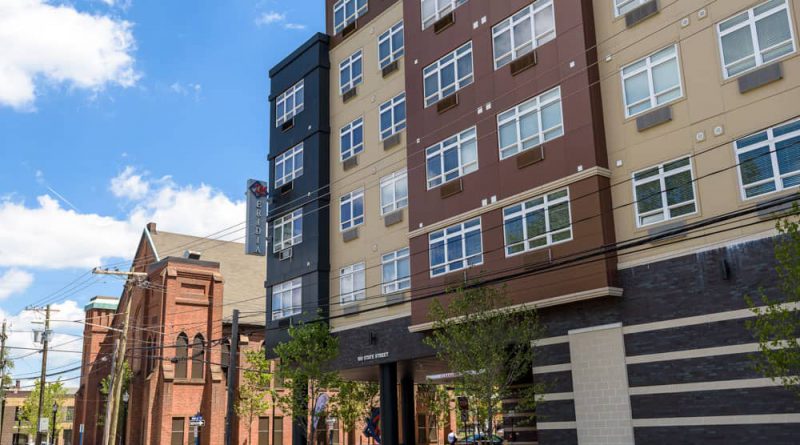 The City of Hackensack, home to about 44,000 residents, is thriving as the 31st Transit Village in New Jersey. The City received this designation in February 2016.

The Hackensack Bus Terminal serves as the focal point of the Transit Village. Located between River Street and Main Street, the bus terminal provides access to 12 different NJ TRANSIT bus routes, and connects riders to the George Washington Bridge Bus Station as well as to Jersey City and Newark and many northern New Jersey locations. Hackensack is also the site of two train stations on the Pascack Valley Rail Line—Anderson Street Station and Essex Street Station—which each border downtown. More than 800 riders board one of more than 30 NJ TRANSIT trains that stop at the stations each weekday. Together, the City and the Upper Main Street Alliance, Hackensack’s Special Improvement District, authored a downtown redevelopment plan for the area within a half-mile of the terminal. The plan promotes retail and commercial improvements and aims to create a connected community around all three transit facilities.

In 2012, Hackensack adopted new zoning regulations and its Downtown Rehabilitation Plan, which designated a 163-acre area comprising 389 properties in need of rehabilitation. The new zoning regulations support increased density through a number of policies that include a prohibition on building setbacks and drive-through businesses and a decrease in required parking ratios. The regulations encourage activity in the downtown through support of mixed-use development and pedestrian-oriented environments and zoning for up to six stories.

Before the plan went to the Planning Board, the Upper Main Street Alliance administered an extensive public engagement process that provided residents the opportunity to learn about the proposed plan and enabled developers and property owners to meet with City staff members. The Hackensack Planning Board adopted the plan in June 2012. With its adoption of a TOD-supportive, mixed-use plan created through consensus, Hackensack put into place the key criteria necessary for its application to the New Jersey Transit Village program.

The plan will bring a mixed-use experience back to Main Street as more people choose to live and work downtown,” said Hackensack Director of Redevelopment Albert Dib.

Dib’s vision for Main Street is “to take the 9-hour street and turn it into an 18-hour street that is lively and provides a myriad of things to do, with over 25 cuisines from all across the world, entertainment, and arts and culture opportunities for visitors and residents alike.”

Street Safety and Aesthetic Projects
The City and Upper Main Street Alliance received a $1 million Transportation Alternative Programs grant to support its Main Street Streetscape project in July 2017. The money will be used to improve aesthetic conditions on Main Street and allow the city to plant trees with grates, install decorative lighting, purchase more benches and trash receptacles, and construct brick paver sidewalks. Additionally, in Spring 2017, Hackensack awarded a $4.45 million contract to New Prince Concrete Construction Company to convert many of the one-way sections of Main Street and State Street into two-way sections. Constructing two-way streets can promote increased pedestrian safety and economic activity. Hackensack is following the lead of Dallas, Denver, Sacramento, and Tampa, all of which have converted one-way streets to two-way streets. Reasons for the shift include lower vehicle speeds and more frequent stops by vehicles, which promote safer pedestrian conditions and increased visibility of local businesses. The Hackensack project will result in new concrete sidewalks, curbs, handicap ramps, upgraded traffic signals, and underground conduits. The first phase of construction began in July 2017; State Street reopened to two-way traffic in December 2017. The second phase is slated for completion in August 2018.

Re-purposing parking has been one strategy utilized in Hackensack’s redevelopment efforts. Atlantic Street Park, which opened in July 2015, reclaimed the site of an underutilized surface parking lot. Designed by DMR Architects, the park provides performance areas for concerts, shaded outdoor space for lunchtime visitors, a garden, and outdoor chess tables. The park also offers free public programs, such as movies in the park, sunset yoga, and Zumba, that help to establish a sense of community within the city and encourage people to frequent the park to relax, exercise, and meet others who live and work in their neighborhood.

In the summer of 2017, Hackensack approved the sale of a large city-owned parking lot to Hornrock Properties and Russo Development. The parking lot provided 544 spaces close to the popular Bowler City, Ice House, and Foschini Park, but was not frequently utilized to its full capacity. The developers plan to build a six-story, mixed-use structure offering residential and retail space as well as parking on the 4.3-acre site. The $86 million proposal includes 338 residential units, 4,000 square feet of retail space, and 200 parking spots, as well as a community kitchen and garden space. Hornrock Properties and Russo Development purchased the property for $11.7 million, including a $3.6 million parking development credit, due to a City-imposed public parking requirement to accommodate patrons to local businesses. The agreement includes an arrangement for a parking revenue sharing contract and a potential three-year payment in lieu of taxes program. Proceeds from this sale are slated to be applied toward infrastructure improvements, details of which have not yet been determined. The future development will be a six-minute walk from the Hackensack Bus Terminal.

In 2016, Capodagli Property Company completed Meridia Metro, a $49.6 million multifamily residential complex on State Street. The building houses 200 residential units (a mixture of one and two-bedroom apartments), a 24-hour fitness center, a rooftop terrace, a pet grooming room, and a grade-level parking garage.

In Summer 2017, the Hackensack Planning Board approved a preliminary plan designed by DMR Architects for a new residential complex on Main Street between Anderson Street and Maple Avenue. This mixed-use development will be built on the old Holman Moving site, which is ¼ mile from the Anderson Street Station and ¾ mile from the Hackensack Bus Terminal. The development will feature 236 residential units, retail space, parking, and common space for residents.

In 2013, Heritage Capital Group purchased 210 and 214 Main Street for over $2.7 million collectively with plans to retrofit the buildings into 127 residential units and restaurants facing Main Street. Originally built in 1926 for the People’s Trust Co. Bank, the site is rich with history. Work is currently underway that will result in a “new” addition to Hackensack’s downtown.

In Hackensack, what’s old is new again,” Dib said. “Hackensack is maintaining its history and sense of place, while building for its future.”