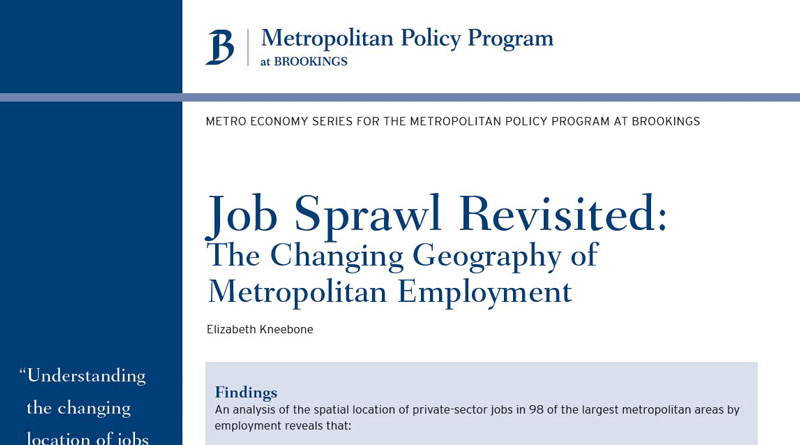 While much has been made in the past about the impact of sprawling housing developments on the environment, transportation patterns, and the economy, a new analysis by the Brookings Institution sheds light on the decentralization of employment that took place in nearly all of the country’s 98 largest metropolitan areas between 1998 and 2006. Jobs Sprawl Revisited: The Changing Geography of Metropolitan Employment examines the spatial distribution of private-sector jobs in these metro areas by employment sectors and finds that an increasing proportion of jobs are located outside of downtowns. The report cautions that when jobs shift away from city centers, the result is unsustainable and energy inefficient development patterns that rely heavily on single-occupancy automobile travel; thereby increasing vehicle miles traveled (VMT), energy consumption, and emissions in the region. In turn, this makes transit-oriented development all the more difficult to implement effectively and efficiently.

Specifically, the findings reveal that:

In the two metropolitan areas that envelop New Jersey—New York-Northern New Jersey-Long Island-NJ-PA and Philadelphia-Camden-Wilmington-PA-NJ-DE-MD—we see from the table below that the NYC area fared slightly better than the national average in terms of jobs sprawl, but the Philadelphia area fared worse. However, there is clearly room for significant improvement in both regions if we are to continue developing in transit-friendly ways.