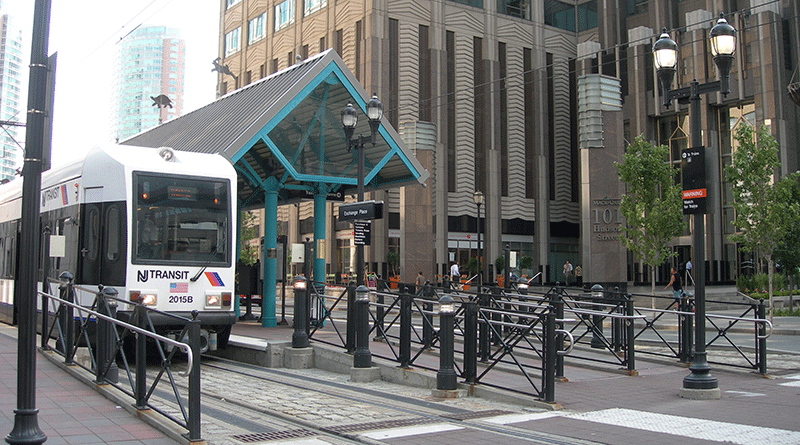 Did you know that New Jersey has had light rail since 1935? That’s right: the Newark City Subway system was built in the middle of the Great Depression with federal funds. Acquired by NJ TRANSIT in 1980 and upgraded with new cars in 2001, the system links residents in north Newark and its surrounding suburbs to major educational destinations in downtown Newark—Rutgers-Newark University, New Jersey Institute of Technology, and the Essex County Community College—as well as important cultural venues such as historic Branch Brook Park, the Newark Museum and the New Jersey Performing Arts Center. Equally important, the subway terminates at Newark Pennsylvania Station giving riders access to Northeast Corridor rail aboard NJ TRANSIT and Amtrak, and PATH service to Jersey City, Hoboken and Manhattan.

Now, 70 years later, New Jersey has two new major light rail transportation lines that rival any in the country: the Hudson-Bergen Light Rail (HBLR) system in Hudson County that connects “Gold Coast” municipalities, and the RiverLINE, stretching from Trenton to Camden along the Delaware River. These new additions form valuable links to existing transportation infrastructure, providing public transit riders more options for more destinations. Moreover, the new stops are spurring both residential and commercial development and redevelopment in the “TOD” (half-mile circle) around the stations.

The HBLR [map] opened its first stations in 2000 after nearly 15 years of development. Conceived as a response to the rapid growth of high-rise office and residential development along the Hudson River waterfront and the area’s poor cirulation, the HBLR currently links Bayonne (22nd Street Station) at its southern end and western Jersey City (West Side Ave) with Weehawken (Lincoln Harbor).

A major attribute of the system is its connectivity. At Hoboken Terminal, currently the busiest HBLR station, passengers can easily connect to PATH, ferry, commuter rail and bus. Pavonia-Newport and Exchange Place stations (second and third in activity, respectively) also feature transfers to PATH, ferry and bus service. In addition, the system gathers drivers at five park and ride lots located at 22nd, 34th and 45th Streets in Bayonne, and West Side Avenue and Liberty State Park in Jersey City.

The land uses around HBLR stations are varied and notable. At the Hoboken 9th Street Station, modern elevators provide rail access to the Jersey City Heights residents atop the Palisades. Riders transferring at Hoboken Terminal pass through a well-landscaped esplanade with breath-taking views of Manhattan and the Hudson River. Alongside the Pavonia-Newport stop, the Newport Mall offers a shopping selection equal to its suburban counterparts. Further south, Harborside and Exchange Place are surrounded by gleaming, signature high-rise office buildings towering overhead. From the Essex Street Station to Marin Boulevard to the Jersey Avenue Station (approximately ½ mile) almost 3,000 new housing units have been completed or started since 2000.

The leading medical facility in Hudson County, Jersey City Medical Center, can be found at the Jersey Avenue Station, while New Jersey City University is only a short walk from the West Side Avenue Station. Recreation and history can be found by getting off at the Liberty State Park stop and walking over to Liberty Science Center, or by catching the bus shuttle to other park attractions such as tourist boats to Ellis Island and the Statue of Liberty. The 34th and 45th Street stations in Bayonne anchor the western edge of the Military Ocean Terminal (a 430-acre peninsula), which is currently the subject of a massive redevelopment plan that will include stores, hotels, office space and thousands of residential units.

Another important component to the HBLR is the rich artwork that is featured at every station. In conjunction with the New Jersey Council on the Arts, selected artists collaborated with designers and engineers to enhance station environments with vibrant murals, sculptures, metal work, and glass etchings.

The line is scheduled to open its last three stations in Hudson County—Port Imperial, Bergenline Avenue, and Tonnelle Avenue—by the end of this year. Port Imperial will connect with a relocated and enhanced ferry terminal (now under construction), Bergenline Avenue will provide elevator access to a densely populated area in north Hudson County on the Palisades escarpment, and Tonnelle Avenue will feature a large park and ride facility that will serve as a collector for Bergen County residents. Express service will originate at Tonnelle Avenue for points south. (There is currently express service from 22nd Street in Bayonne to points north.) The approaching completion of the HBLR is a testament to what many commuters and residents have already discovered: This is an extraordinary transit asset that offers not only easy access to the Hudson County waterfront and Manhattan, but provides important connections to commuting suburbs, Newark and the Northeast Corridor.

New Jersey’s newest addition in light rail transportation is the RiverLINE [map], initiated in March 2004. Its route hugs the Delaware River from Trenton to Camden for 34 miles and features 20 stations that offer a range of employment, recreation and historic attractions. Barely 18 months in operation, RiverLINE monthly sales are increasing faster than any other NJ TRANSIT service and it has the highest group sales in the NJ TRANSIT system.

As with the HBLR, the RiverLINE is all about connections. At Trenton riders can access the Northeast Corridor (NJ TRANSIT or Amtrak) for job centers in New Brunswick, Newark and New York. They can also transfer to SEPTA for Philadelphia and its suburbs. In Camden, at the Walter Rand Transportation Center, passengers can transfer to the PATCO High Speed Line for Philadelphia or Cherry Hill and Lindenwold where there are connections to Atlantic City via the Atlantic City Line.

Major summer events at entertainment and sports venues in Trenton, Camden and Philadelphia are important factors in rising ridership levels. The Adventure Aquarium and Battleship New Jersey, Tweeter Center and Campbell Field in Camden, Sovereign Bank Arena, and Waterfront Park in Trenton are all easily accessible through the RiverLINE. In response, NJ TRANSIT offers late night service, weeknights and Saturdays, from the Camden Waterfront Entertainment Center Station to the 36th Street Station park-and-ride in Pennsauken; and, between Trenton and Camden on Saturdays. NJ TRANSIT has also instituted a new fare policy on July 1, which enables customers holding a monthly or weekly commuter rail pass to ride the River LINE at no additional charge. There are other special fares for seniors, families and children.

At RiverLINE stations, like the HBLR, art is integrated into the physical components. Decorative tile mosaics that represent the station community adorn columns and walls.

Towns along the system have been reporting increased housing and commercial demand. Development interest is high and new retail stores and restaurants have been opening up near stations in many communities. The RiverLINE is not only providing new transit possibilities for residents of South Jersey, but it is also spurring significant economic growth and redevelopment along the waterfronts of Burlington and Camden Counties.