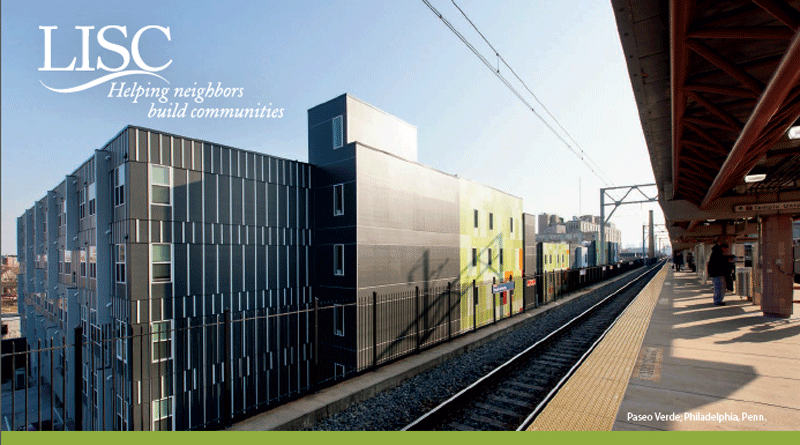 Promoting the welfare of existing residents and newcomers alike is the goal when the Local Initiatives Support Corporation (LISC) takes on a transit-oriented development (TOD) project. In Our Investments in Transit-Oriented Development, LISC discusses projects it has funded across the country that have kept local communities intact while providing residents with affordable housing and economic opportunities within walking distance of public transit. The organization recognizes that an unintended consequence of new development–TOD included–can be higher housing and commercial property prices. While this can be a boon to home and building owners, it can also result in long-time tenants being priced out of their own neighborhoods. However, LISC has demonstrated that TOD doesn’t have to negatively affect residents, provided those involved plan carefully and adopt strategies that support the economic prospects of all residents.

LISC’s strategy is to enhance community well-being through investment in local jobs and to provide residents low-cost housing with all-important access to public transportation, rather than to develop properties only to capture the highest rateables. Its investment is strengthened through its partnerships with transit agencies, community organizations, municipalities, and state and federal agencies. Many LISC projects provide a mixture of affordable housing and small business opportunities. The AB&W Building in Boston’s Dorchester neighborhood is a prime example. LISC partner, Codman Square Development Corporation, converted the AB&W from an aging industrial site to a co-op with 24 affordable apartments and commercial space. The project was planned to coincide with the opening of a new Fairmount commuter rail line station, the Four Corners Station, located one block away. The property is now also home to the Erick Jean Center for the Performing Arts, a gallery space for local artists, and locally-staffed City Fresh Foods, which provides wholesome meals to organizations throughout the Boston area.

Projects like AB&W demonstrate that TOD need not only benefit the financially well-off. In fact, TOD can perhaps be most beneficial for lower- and middle-income workers who value the impact of reduced transportation costs on their paycheck. Investing in TOD in less affluent neighborhoods can bring much-needed jobs, affordable housing and transportation, and a sense of community, and, as LISC is demonstrating over and over again, TOD can be a smart and feasible venture for all stakeholders.