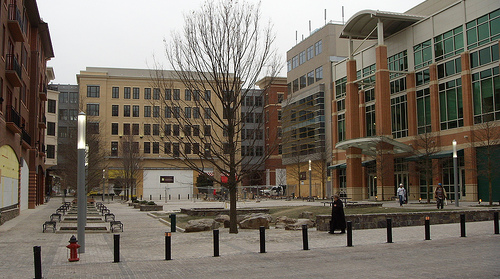 The State of Maryland is nationally recognized for its leadership in policies and programs that link transportation and land use to economic development and community revitalization. Specifically, the Maryland Department of Transportation (MDOT) has been committed to transit-oriented, joint and transit-adjacent developments that support economic growth and neighborhood revitalization in close proximity to transit facilities. As a result, Maryland is becoming the state to watch with its impressive array of TOD projects in process:

Rockville Town Square
New condos will be opening this month in Rockville Town Square, located two blocks from a Metrorail station.  This is a 15-acre redevelopment in the heart of downtown Rockville — a pedestrian-oriented, mixed-use community anchored by a public plaza and the town’s new library.  It will include 600,000 square feet of office, 170,000 square feet of retail and 620 residential units.

Greenbelt
Greenbelt Station, a new transit-oriented development, to be built near the Greenbelt Metrorail station on a 240-acre site, will include 1.2 million square feet of office, 1.2 million square feet of retail, 2,200 residential units and a 300-room hotel. Its collection of homes and shops, separated with bands of greenery will mirror the “garden city” elements of the original Greenbelt community built in the 1930s. Greenbelt Station will also emphasize pedestrians over cars, featuring wide sidewalks lined with benches and plantings.

Hyattsville
University Town Center is a massive mixed-use project in Hyattsville near the Prince George’s Plaza Metrorail station.  It will include a 14-screen movie theater, a 57,000-square foot Safeway, nearly 1 million square feet of office space, 1,760 residential units and 360,000 square feet of retail. The residential units will include housing for students at the University of Maryland, Catholic University and Howard University, all of which are relatively close to the Metrorail station.