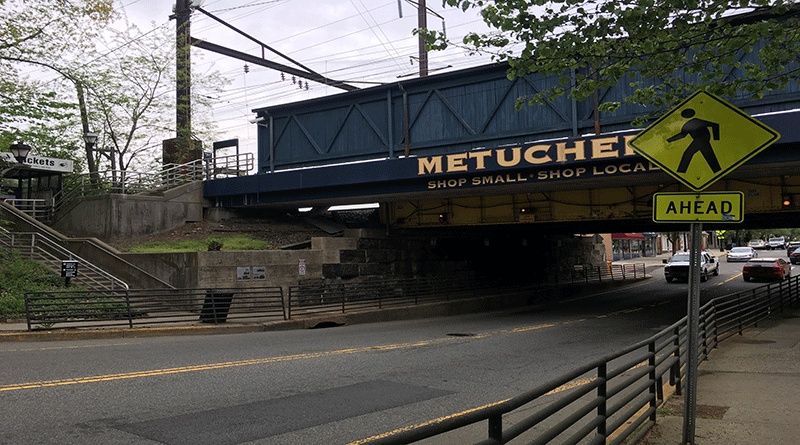 Metuchen, the “hole in the doughnut” of Edison Township, has a lot going for it—a compact and successful downtown adjacent to its rail station, good schools and attractive historic housing. Located on the Northeast Corridor line in central New Jersey, commuters are able to reach Newark and New York to the north and New Brunswick, Princeton, Trenton and Philadelphia to the south. Many commuters use the Metuchen station each day. The borough has devoted more than 1,400 surface parking spaces to commuter parking, with three lots located at the corner of Center and New streets providing more than 750 spaces.

The borough has a history of paying attention to the details that make a transit-friendly community work and recognizes that redevelopment is a continuing process. Since the early 1980s, plans have been in place for downtown Metuchen which encourage more intensive use of the several large parking lots. The master plan calls for structured parking to replace the current surface lots. Enhancements to improve the competitiveness of the business district have been implemented since the 1970s, when the borough’s Main Street businesses started to suffer as customers were drawn to malls in nearby Edison (Menlo Park) and Woodbridge (Woodbridge Mall). The Main Street business district, from the train station to Middlesex Avenue (Route 27), includes several specialty retailers and restaurants. Infill development at Franklin Square brought 105 new residences to the community in 2002.

Recently, Metuchen received a Smart Future grant of $50,000 to continue its public outreach efforts in support of redevelopment. Several days of workshops/charettes were held that focused on the New Street corridor—the street that connects Metuchen’s Main Street and Lake Avenue (Route 27)—and the parking lots located along New Street and the rail line, including the Center and New street lots.

On September 23, residents, officials and planners participated in a “Benchmarking Tour,” visiting several central New Jersey locations to gain inspiration and ideas about possibilities that could be transplanted to their neighborhood. The following day, local business leaders met with state and borough officials to discuss how the New Street corridor could be improved to enhance the business environment. Main Street New Jersey (a part of the NJ Office of Smart Growth) presented ideas for an improvement district that would benefit the entire borough and include existing Main Street businesses as well as new businesses in the redevelopment area.

On September 25, planning officials hosted an open house where discussions focused on circulation, public spaces, streetscapes, building types and activity programming. At the final event on September 26, planners from the firm of Looney Ricks Kiss presented a draft downtown design and circulation plan, as well as draft design guidelines for the New Street corridor.

Local concerns brought up during the meetings were economic vitality, congestion, preservation of existing parking, and expanding local services in a way that would complement local business activity. Transportation discussions involving the NJDOT, NJ TRANSIT and Borough officials focused on traffic calming measures, such as adding one or possibly two roundabouts and/or a median on Middlesex Avenue (Route 27).