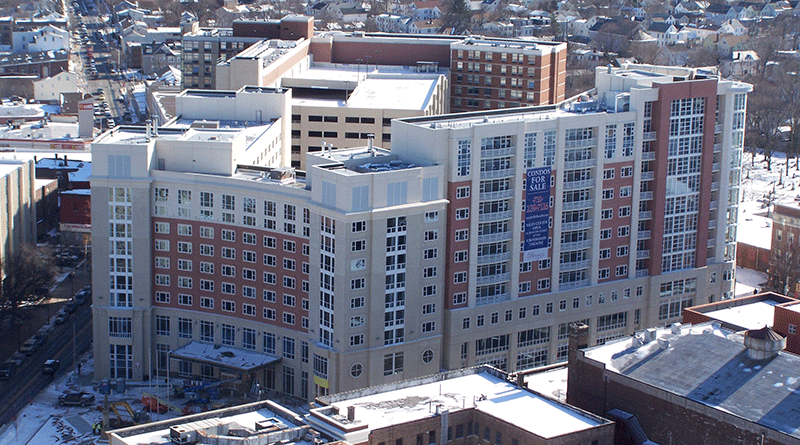 New Brunswick’s superior transportation assets are increasingly being recognized by developers, institutions, retailers and residents. On the rise since the mid-1980s and designated as a transit village in 2005, New Brunswick has become an attractive place to work, live and play. It is home to the state’s largest educational institution, Rutgers University, as well as Johnson & Johnson’s corporate headquarters and the extensive Robert Wood Johnson University Hospital/University of Medicine and Dentistry of New Jersey (UMDNJ) medical complex.

This central New Jersey city has nearly 50,000 residents, a 2.7 percent increase since the 2000 Census. It features a remarkable array of cultural amenities including the State Theatre, the George Street Playhouse, Crossroads Theatre, and various Rutgers University musical and arts venues. Boarding from the historic New Brunswick train station, passengers can easily reach all points along NJ TRANSIT’s Northeast Corridor line from Trenton to Penn Station New York in less than an hour, including Newark Liberty International Airport, Penn Station Newark and Princeton. Moreover, riders can transfer to PATH service in Newark for Jersey City, Hoboken and Manhattan, or connect with service to points in Bergen and Passaic Counties via the Secaucus Junction. There is limited Amtrak service along the Washington–Boston corridor at New Brunswick, but frequent service is readily available by transferring at Metropark or Trenton.

The Transit Village district (a half-mile circle around the New Brunswick train station) is the site of many exceptional projects. Some of these resulted entirely from private investment, while others are the outcome of efforts by DEVCO, the New Brunswick Development Corporation. A tax-exempt urban real estate development company, DEVCO was created in the mid-1970’s to initiate redevelopment projects and facilitate public and private investment in the city.

The Highlands at Plaza Square, completed in 2004 by Roseland Property Company, features 400 upscale rental units with some convenience retail.

One Spring Street, now the tallest building in New Brunswick at 23 stories, was completed in 2006 by private developer Wasseem Boraie. It contains 121 luxury condominiums on the top 19 floors with parking and ground floor retail below.

Rockoff Hall, opened in the Fall of 2006, is a Rutgers dormitory featuring 186 apartment suites, ground floor retail and a parking deck. This project is a joint development between the university and DEVCO.

The Child Health Institute of New Jersey was completed in 2005 and is another DEVCO undertaking in conjunction with UMDNJ. This new institute has developed the country’s most comprehensive biomedical research center to focus on the genetic, environmental, and behavioral factors in human growth and development with an emphasis on prevention, treatment, and cure of childhood diseases. The expansive research and development facility, situated among the campuses of Robert Wood Johnson University Hospital, UMDNJ-Robert Wood Johnson Medical School, and The Cancer Institute of New Jersey, includes laboratories, office and administrative space, a transgenic gene targeting facility, and vivarium. The Child Health Institute will anchor additional redevelopment in the immediate area, further strengthening New Brunswick’s concentration in the health care industry.

The second of three phases of a very successful HOPE VI-financed project is now complete. The New Brunswick Housing Authority (NBHA) and The Community Builders, Inc. (TCB) secured a HUD HOPE VI grant in 1998 for the demolition of the aging Memorial Homes and the construction of new housing. Working with local residents, the City developed what became known as the Lower George Street Revitalization Plan. The goal was to provide a pedestrian-friendly design, lower-density housing units, and more opportunities for local businesses, as well as to serve as a catalyst for development throughout the city. The completed Hope Manor and Riverside phases include 144 low to affordable rental units, with half the units reserved for public housing recipients and the other half reserved for families earning between 50 to 60 percent of the area median income. Each project has a mix of 2-, 3- and 4-bedroom units. The developments also include a commercial component of over 7,800 square feet of retail space and a new community center.

Most recently, New Brunswick welcomed the opening of the 11-story Heldrich Hotel and Conference Center which features 248 guest rooms, 21 meeting rooms, an 80-seat amphitheater, restaurant and bar. Benchmark Hospitality will manage the conference center and hotel. When complete, the facility will also include 48 luxury condominiums and new offices for the Heldrich Center for Workforce Development, a unit of the Edward J. Bloustein School of Planning and Public Policy at Rutgers. The project represents a unique partnership among DEVCO, private developers, Rutgers, the New Jersey Department of Labor, the New Jersey Redevelopment Authority, the Casino Reinvestment Development Authority, and the City of New Brunswick.

New Brunswick is not nearly finished with redevelopment and has targeted many sites, particularly surface parking lots, for new projects. The next project, known as The Gateway, will dramatically impact the personality and skyline of the city. Working with the City of New Brunswick, the New Jersey Department of Transportation, NJ TRANSIT and Amtrak, DEVCO has crafted a plan for a major redevelopment project on the block just north of the New Brunswick Train Station. The Gateway features an innovative mixed-use design comprised of structured parking, a destination bookstore along with other considerable retail spaces, and a significant residential component. The facility will rise 330 feet above the train station, becoming the city’s tallest building, and will connect directly to the Northeast Corridor rail line platform by way of a sweeping pedestrian promenade. To maintain the current balance and scale of the redevelopment area, the 24-story luxury residence tower will be set back upon the retail podium. The expansive glass façade of The Gateway was designed to enhance the adjacent historic setting of St. Peter’s Roman Catholic Church and the nearby Old Queen’s campus of Rutgers, a National Historic Landmark. DEVCO is also working with the city’s Historical Association to preserve some of the unique facades of the older buildings currently on site. By transforming the declining neighborhood adjacent to the train station through this high-density, mixed-use redevelopment project, DEVCO anticipates substantial benefits for New Brunswick.

Transit Village New Brunswick is applauded for long range planning, creative partnerships, impressive results and recognition of the value of its transit service. This is definitely a city to watch and visit.