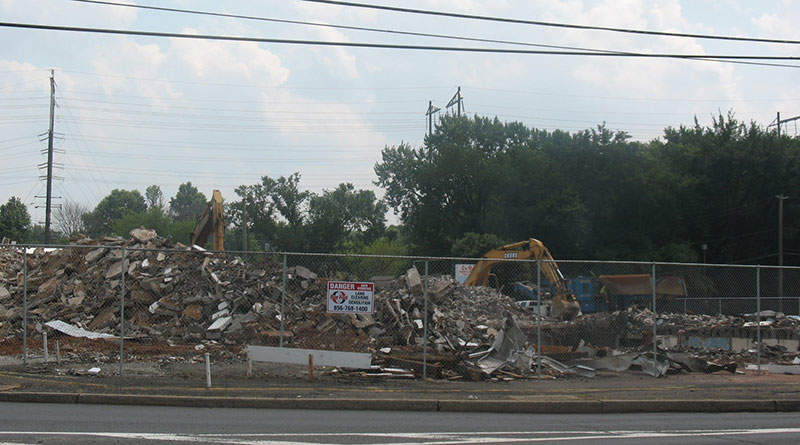 Work has finally begun on the redevelopment of a former supermarket site in Metuchen. In July, demolition and clearing began on the 5.85-acre site, located at the corner of Lake and Middlesex avenues about 0.4 miles from the borough’s busy rail station. This effort will make way for The District at Metuchen, a four-building retail and residential complex. The redevelopment will require the demolition of six houses and the Boro Ace Hardware, which will be relocated to one of the new buildings.

Some 4,000 boardings per weekday occur at the Metuchen station, making it the 7th busiest outlying station in the NJ TRANSIT rail system. Metuchen passengers can take one of more than 50 trains daily on NJ TRANSIT’s Northeast Corridor to Newark Penn Station or New York Penn Station and 40 trains daily to Trenton. Average travel time to midtown Manhattan is 52 minutes; express travel takes as little as 40 minutes. Average travel time to Trenton is 45 minutes.

Redevelopment of the site has been a subject of discussion for several years. Early plans for this project called for first floor retail with 121 one-, two- and three-bedroom units above, though changes are likely. These plans also included office space that has since been dropped in favor of several live-work units. The developer, Renaissance Properties, Inc. of Old Bridge, is negotiating with the borough to increase the number of units to 150 overall, without changing the project’s footprint by reducing the size of the largest units. The largest of the four buildings will house a 15,600 square-foot grocery store and will wrap structured parking. The parking garage will be accessible from a ground level entrance and interior corridors on each floor. In addition, a connecting bridge will link the garage to a new building housing the live-work units and the relocated Ace Hardware store. In total, the site will incorporate parking for 501 vehicles, including on-street parking and surface parking to be located behind the new buildings. Improvements are to be made to the intersection of Lake and Middlesex avenues, as well as to Central Avenue, which bisects the site.