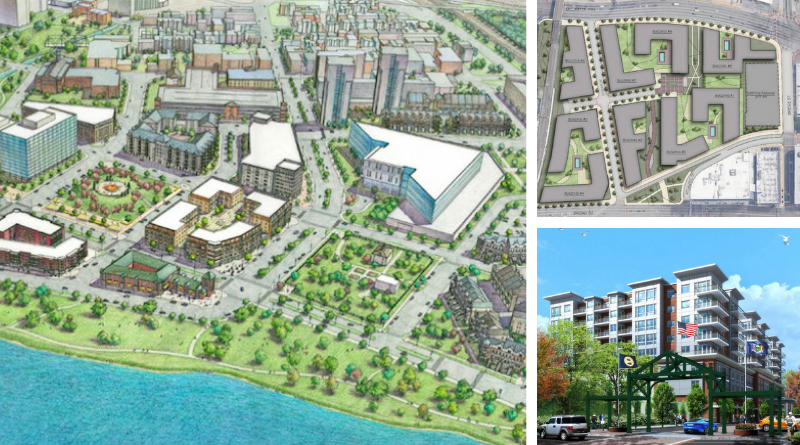 AUSTIN—Community Group Will Help Guide $300 Million of Project Connect Anti-Displacement Spending
Bryce Newberry, KVUE, April 12, 2021
When the City of Austin’s landmark Project Connect transportation initiative was approved by voters last fall, it included a provision to allocate several hundred million dollars to fighting displacement that the new transit, rail and expanded bus, might exacerbate. Recently, the City announced that it had formed the Catalyst Group, a collection of local stakeholders that will help to figure out how this money should be spent. According to the City, 88 percent of panel members are from Austin’s Eastern Crescent, an historically redlined, disinvested part of the city, where 90 percent of the residents are people of color, and all make less than the area’s median income. 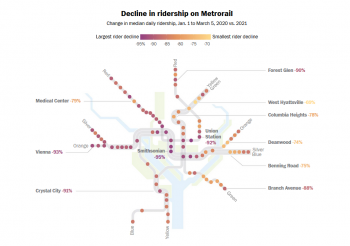 Transportation: The pandemic changed the workday, but will transit riders return?
Justin George, Kate Rabinowitz, Maria Aguilar and John D. Harden, The Washington Post, April 16, 2021
Transit agencies and others are paying close attention to travel trends that have resulted from shifting demands, work from home, and other behavioral changes that continue to evolve a full year into the COVID-19 era. Noticeable shifts include relatively strong demand for public transit in communities with high numbers of Black, Hispanic and lower-income workers, as well as a flattening of peak travel periods. Some transit agencies are employing schedule modification, while others are studying the effects of implementing lower fares, to address what might be a prolonged period of reduced ridership.

How Amsterdam Recovered from a Deadly Outbreak — in 1665
Feargus O’Sullivan, Bloomberg CityLab, April 14, 2021
A new study on the economic effects of Amsterdam’s 17th century bubonic plague epidemic, as well as France’s 19th century cholera outbreak, looks at how the growth of these embattled urban centers was affected. Perhaps counterintuitively, once the epidemics had passed, there was quick stabilization and positive change. Amsterdam’s population continued to rise, and, in an effort to expand access to land acquisition, the mortgage was invented (previously buyers had to pay the total sum upfront). None of this is to discount the ravages of infectious illness in urban areas, but looking to the past can provide hope for the future of cities post-COVID-19.

How Biden Can Free America From Its Zoning Straitjacket
Edward L. Glaeser, The New York Times, April 12, 2021
This opinion article looks at the regulatory means by which zoning has limited housing production in the United States over the last half-century, and how President Biden’s massive COVID-19 infrastructure bill could be tailored to incentivize states and municipalities to loosen their restrictions. “If the president wants to break the country out of its zoning straitjacket, the infrastructure plan should ensure that no benefits go to states that fail to make verifiable progress enabling housing construction in their high-wage, high-opportunity areas,” Edward Glaeser, Harvard professor of economics writes. Such a measure would dramatically increase levels of transit-oriented development, and recalls Massachusetts’s Chapter 40R Smart Growth Act, passed earlier this year, which incentivizes TOD and mixed-use development by conditioning the disbursal of funds on the removal of restrictive zoning.

Need a COVID-19 Vaccine? Visit Your Local Transit Center
Jenny Bergal, Stateline, April 12, 2021
Across the country, transit agencies are working to transport people to their COVID-19 vaccination appointments by providing free travel on their networks. These efforts have included California’s Foothill Transit’s transformation of a new bus depot into a vaccine clinic, and MARTA’s repurposing of a commuter parking lot adjacent to the Doraville rail station in suburban Atlanta. There the transit agency teamed with DeKalb County and the county health department to set up a large vaccine site.

Paterson Breaks Ground on $94M Project to Revitalize Historic Hinchliffe Stadium
Joe Malinconico, Paterson Press, April 14, 2021
Hincliffe Stadium, a long-decaying site overlooking Paterson’s Great Falls, will be brought back to its former glory through a project that will include a six-story 75-unit senior citizen apartment building. The City hopes that this project will honor the legacy of the ballpark, once host to the National Negro League. The area is served by the NJ TRANSIT 712 bus, and is located about a mile from Paterson Station, with service to Hoboken and New York.

New Redeveloper Will Head Project in Central Ward at Former Newark Bears Stadium Site
Tom Wiedmann, Tap Into Newark, April 14, 2021
Developer May Newark LLC received approval to begin construction on a large redevelopment of a vacant site near the waterfront, the former Newark Bears Stadium. May Newark plans to build 4,200 housing units, as well as office, retail, and public space. In terms of equity, 5 percent of the units will be designated as affordable, and a $15 million PILOT (Payment in Lieu of Taxes) contributed to the city. The site is accessible by transit via the Riverside Stadium stop on NJ TRANSIT’s Newark Light Rail.

Trenton’s Plan to Reclaim the Waterfront Endangers Iconic Modernist Buildings
Darren Tobia, Jersey Digs, April 9, 2021
A redevelopment plan by the New Jersey Economic Development Authority would reconnect downtown Trenton with the Delaware River waterfront but it has received opposition from groups concerned about two modernist buildings that would be demolished. The redevelopment area is served by several NJ TRANSIT bus routes and SEPTA bus route 127, and is located within a ten-minute walk of the Trenton Transit Center providing access to commuter rail and Amtrak service on the Northeast Corridor and to the RiverLINE light rail.

NEW MEXICO—Zia Station Timeline: Moving Dirt
Katherine Lewin, Santa Fe Observer, April 14, 2021
The Santa Fe City Council voted to give preliminary approval for a transit-oriented development next to the Zia Road Rail Runner Express train station. Though the project still needs several rounds of Planning Board review and approval, the developer Zia Station LLC expressed optimism that construction could begin as soon as this August or September. The first phase will build 14 townhomes and 244 apartments and will comply with the City of Santa Fe’s affordable housing requirements.

PENNSYLVANIA—Society Hill Hotel Tower that Sparked Backlash Moves Ahead
Ryan Briggs, WHYY, April 13, 2021
An unnamed developer in Philadelphia’s historic Society Hill neighborhood obtained a permit to demolish a single-family building and construct an eight-story tower with hotel rooms and ground floor retail. The Society Hill Civic Association remained opposed to the new development, saying it conflicted with the neighborhood’s character. However, the developer has completed a revision process with the Philadelphia Historical Commission, which has approved the project.

ILLINOIS—South Siders Keep Pushing For Housing, Employment Near Obama Center Site: ‘We Want To Make Sure This Is Something That Works’
Maxwell Evans, Block Club Chicago, April 12, 2021
Advocates and elected representatives are working to ensure that development surrounding the Obama Center in Jackson Park, on Chicago’s Far East Side, includes affordable housing. The recently passed Woodlawn Housing Preservation Ordinance requires the reservation of 30 percent of new units on city-owned lots for “very low-income households,” as well as payments to neighborhood housing development and stabilization programs. These changes come during significant renovation work at the 59th St. Metra Station, and while the line is experiencing a 50 percent fare reduction to improve access for residents in the traditionally underserved area.