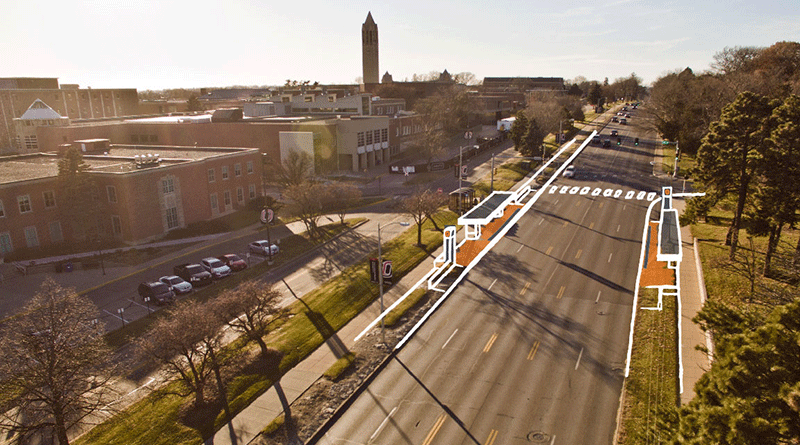 Russo Development Partners to Overhaul Former Hackensack Site of The Record Newspaper
Linda Lindner, NJBiz, April 12, 2019
A partnership between Russo Development, The Hampshire Cos., and Fourth Edition Inc. plans to redevelop the former headquarters of The Record newspaper. The site is located in one of Hackensack’s designated Opportunity Zone census tracts, making it eligible for real estate investment tax benefits. When complete, the 20-acre site will include 650 apartments and 18,000 square feet of retail space located within walking distance of a major bus terminal and one mile from the Essex Street Station on NJ TRANSIT’s Pascack Valley Line.

NJEDA Expands Brownfields Loan Program to Remediate Contaminated Properties
Steve Lubetkin, GlobeSt.com, April 15, 2019
The New Jersey Economic Development Authority has expanded its financing opportunities and, under its new Brownfields Loan Program, will offer up to $5 million in low-interest loans to developers of brownfield sites. The loans can be used to finance site remediation (including investigation and assessment costs) to make it suitable for redevelopment into a productive parcel of land. This financing program will help make it possible to affordably remediate and redevelop contaminated sites around train stations, such as the Landfill Redevelopment project in Somerville and other parcels owned by NJ TRANSIT.

Restaurants, Park, Apartment Complex Coming to Parsippany
Katie Kausch, Patch.com, April 15, 2019
Stanberry Development Group has announced that Parsippany and Hanover Townships have approved “The District at 15fifteen” development along Route 10. The complex, although situated between I-287 and Route 202, will be designed with a focus on walkability and a “living streetscape.” The mixed-use project will include a park, 100,000 square feet of retail, restaurants, a gym, and 441 market-rate and affordable apartments, ranging in size from studios to three bedrooms.

2 N.J. Rail Lines Will Reopen (A Little) Sooner than Expected, Murphy Says
Brent Johnson, NJ.com, April 17, 2019
Governor Murphy has announced the Atlantic City Rail Line and the Princeton Branch (Dinky) will reopen on May 12, two weeks earlier than planned by NJ TRANSIT. The Atlantic City Line will have increased service when it reopens, running five trains between Atlantic City and Philadelphia before noon, compared to three prior to the closing. Princeton Dinky service remains unchanged. Currently there is no update on the restoration of direct service to Manhattan for the Raritan Valley Line.

Omaha’s Biggest Mass Transit Investment in Decades Moves Closer to Reality
Jeffrey Robb, Omaha World-Herald, April 13, 2019
Omaha, Nebraska’s local transit authority is preparing to debut the Omaha Bus Rapid Transit system in April 2020. Construction will begin this summer on 24 raised station platforms along Dodge and Douglass Streets. The new buses will be able to hold green lights along the 28-minute route, will make fewer stops, and will utilize a dedicated lane along the main thoroughfare between downtown Omaha and the Westroads Mall. City officials are working to adjust zoning regulations and recruit developers to build housing and capitalize on other real estate opportunities in the neighborhoods around future stops.

Logan Square Community Group Challenges 100-Unit Affordable Housing Project
Jay Koziarz, Curbed Chicago, April 15, 2019
Community members are protesting a proposed 100-unit affordable residential development across the street from the Logan Square Blue Line stop in Chicago. The city-owned parking lot will be sold to the nonprofit Bickerdike Redevelopment Corporation for one dollar. In addition to the housing, plans call for 20 parking spaces, a small public plaza, and 4,500 square feet of commercial space aimed at local small businesses and nonprofits. Residents fear the project will not blend with the existing neighborhood. They also seek more public space and additional on-site parking made available to the public.

New Rules for Development near Charlotte Transit May Help Affordable Housing Too
Danielle Chemtob, The Charlotte Observer, April 15, 2019
The Charlotte City Council has approved changes to its 20-year old zoning code to expedite the approvals of new development projects around the light rail network. The new rules create four separate transit-oriented development (TOD) districts and incentivize developers to include affordable housing in their projects through a “bonus height” provision. Areas of the TOD districts within a ¼ mile of a light rail station have no height limits. TOD projects have until July 1 to adhere to the zoning regulations.

Train Station Renovation Key to Revival of White Plains Neighborhood
Richard Liebson, Rockland/Westchester Journal News, April 16, 2019
In April 2018, the Metropolitan Transit Authority (MTA) started renovations to the White Plains Metro-North rail station to upgrade technology, aesthetics, and safety and transform the station into the hub for the east-west Hudson Link express buses. The City of White Plains has approved a zoning overlay for a ⅓-mile buffer around the station to facilitate pedestrian and bike friendly streets and to create a connection between the station and its neighboring residential areas. Plans and RFPs issued by the City focus on facilitating residential and commercial infill development between the transit center and downtown and increasing Metro-North ridership.

Town of Herndon ‘Crescent’ Eyes Remaking by 2035
Fatimah Waseem, Reston Now, April 17, 2019
In anticipation of the 2020 opening of the WMATA Silver Line Phase 2, Herndon, VA town officials are planning for transit-oriented development that maintains the town’s historic and small-town feel. They are working to accommodate growing demand for housing and office space in a formerly agricultural area of Virginia between Washington, D.C. and Dulles Airport. To achieve this goal, town officials are working directly with eight private owners who hold the land at the entrance of the future Herndon Station. Slow but steady development is projected through 2035, allowing time for the region to increase its infrastructure capabilities, add space in its schools, and install new public amenities to accommodate the increased population.

Housing Co-Op Proposed at City of Vancouver Property near Joyce SkyTrain Station
Carlito Pablo, The Georgia Straight, April 15, 2019
The Co-operative Housing Federation of British Columbia’s Community Land Trust (CLT) has proposed a six-story, 102-unit residential co-op project, located within a five-minute walk of the Joyce-Collingwood SkyTrain Station and bus transfer hub. The project would be the first of CLT’s seven affordable housing developments on Vancouver city-owned property and would be part of the organizations housing portfolio. The projects are a result of a partnership between the Vancouver Affordable Housing Agency and CLT and will be secured under a land trust model, keeping the units financially secure, maintained, and affordable.

Hyderabad Metro Rail Sets One Million Passenger Target
Business Bureau, Telangana Today, April 18, 2019
Hyderabad Metro Rail Limited in India is working to increase its ridership numbers from 230,000 to 1 million daily riders by facilitating easy access to rail stations along the network. The company has constructed skywalks and dedicated lanes at some stations. The company has also hosted expos and vendor markets to attract riders and is starting a three-year project to connect the main technology belt of the City to Hyderabad airport via a 20-minute train ride.