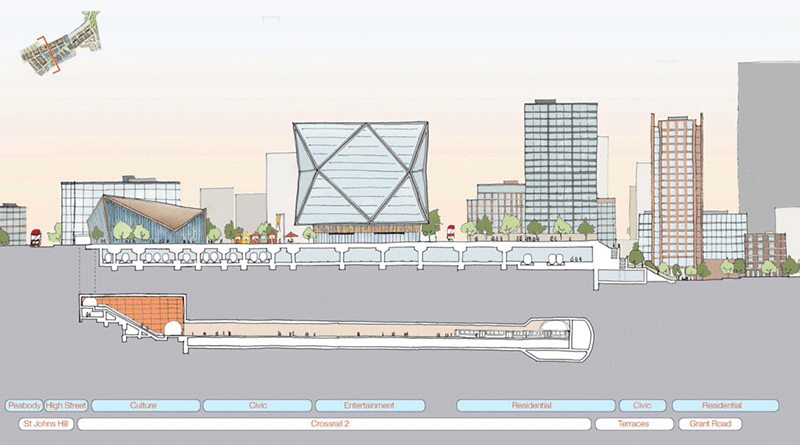 Live Above Your Station: 300,000 Homes Could Be Built Above London Railway Tracks – For the Fastest Commutes in Town. Clapham Junction project proposal. Source: Hawkins/Brown.

Planning Firm Shows Summit Council Broad Street West Plan Featuring Four ‘Subdistricts’
Karen Ann Kurlander, TAPintoSummit, April 4, 2019
Topology, a Newark based planning firm, presented a proposal last week to redevelop Broad Street West in Summit (a Transit Village since 2013). The redevelopment area is close to the train station and includes 8.4 acres of public land, which Topology proposes to develop into four uniquely themed ‘subdistricts.’ One subdistrict would have a commercial theme, while the other three would be mixed-use and include residential, retail, and open space. They would also vary in density.

Life on the Other Side of Passaic’s Abandoned Railroad Track May Soon Change
Matt Fagan, North Jersey Record, April 8, 2019
New York and Greenwood Lake Railroad, a former segment of Conrail track that has been inactive since 2012, is waiting to be declared “abandoned” by the federal Surface Transportation Board. After receiving the designation, the owner will give the track’s property to the City of Passaic in exchange for another plot of land. The City of Passaic plans to tear up the track and unite two city parks split by the rail in a step toward rejuvenating a blighted area that abuts an elementary school and apartments occupied by families.

Lawsuit Targets Jersey City’s ‘Blatantly Illegal’ Chain Store Limits
Terrence T. McDonald, The Jersey Journal, April 9, 2019
A developer is suing Jersey City, the Planning Board, City Council, and the Jersey City Redevelopment Agency, challenging the City’s ban on chain stores in portions of the downtown area. The developer, Alfonso Carrino, states he has been unable to find an anchor tenant for his project due to the zoning ordinance restrictions in his neighborhood, near the Grove Street PATH station. The lawsuit stipulates the restrictions violate the commerce and equal protection clauses, while city officials say they are meant to protect small local businesses from being “muscled out” by chain stores.

Amtrak Strikes Deal to Redevelop Penn Station with Baltimore Developers, Investing $90 Million
Lorraine Mirabella, The Baltimore Sun, April 4, 2019
Amtrak has announced a master development agreement with Beatty Development Group and Cross Street Partners to create a $500 million mixed-use, transit-oriented hub around Baltimore-Penn Station. Amtrak will invest $90 million in station and track improvements and will lease an adjacent parking lot to the developers for a mixed-use project. Eventually, the Penn Station neighborhood will tie in with the newly developed Station North area to create a hub for Amtrak, MARC commuter rail, light rail, and bus service in Baltimore.

Envisioning an Equitable and Thriving Future in Transit-Oriented Development in Los Angeles
Melani Smith, Urban Land Institute, April 8, 2019
Research conducted by ULI-LA, LA Metro, UCLA, and LA Planning and Land Use Society has investigated the effect development within a half-mile of LA transit might have on ridership. It finds that large-scale residential development is the most efficient and beneficial. However, it also finds that smaller, more unconventional multifamily building types, including duplexes, fourplexes, and mid-rise buildings with 20 or more units, may meet the demand for housing around transit.

How Busways Can Lead Pittsburgh into an Equitable Transit Future
Ryan Deto, Pittsburgh City Paper, April 10, 2019
Pittsburgh has had grade-separated busways closed to vehicular traffic (bus rapid transit) since the early 1980s, when three lines were constructed on existing trolley and rail rights of way. However, most stations remain undeveloped, and many residents of the region do not know the busways are the fastest way to get downtown. Local officials are looking to build affordable, mixed-use development near busway stations for the 115,000 people who live within a half-mile of a station. The development is driven by vacant land availability and potential zoning changes to eliminate minimum parking requirements.

Medistar Plans Major Downtown Phoenix Project
Kelsi Maree Borland, GlobeSt.com, April 9, 2019
Medistar Corporation plans to build Central Station in downtown Phoenix, a mixed-use project that will include a hotel, apartments, student housing, and ground floor retail and office. The project site, ground leased by the city, is located adjacent to the Van Buren/1st Avenue light rail station. The project will seek to satisfy a rapid increase in demand for living and working in downtown Phoenix, and will potentially serve as “a model for future projects.”

18K Capacity Chase Center Will Only Have 950 Parking Spaces
Ann Rubin, KTVU News, April 10, 2019
At a Port Commission meeting last Tuesday, officials announced only 950 parking spaces will be available for the Chase Center. When it opens, the multi-use arena will be the new home of the Golden State Warriors basketball team. San Francisco Municipal Transportation Agency (SFMTA) plans to encourage increased transit use, in cooperation with the Warriors, who are funding express bus service connections to rail and extra service for the T line. Additionally, SFMTA will implement hourly and resident-only parking limits on nearby streets to alleviate traffic and parking concerns in the neighborhood.

Live Above Your Station: 300,000 Homes Could Be Built Above London Railway Tracks – For the Fastest Commutes in Town
Anna White, Homes & Property UK, April 10, 2019
A team of architects, engineers, and a construction group has proposed a new transportation hub around the existing Clapham Junction commuter station. The team proposes adding more platforms and creating a vibrant commercial and residential space above the rail tracks that currently take commuters from Battersea and Wandsworth to London. About 5,000 to 7,000 homes could be built above the live Clapham Junction track, and other track locations in London provide opportunities to build almost 300,000 units, according to a WSP report.

Barcelona’s Superblocks Are a New Model for “Post-Car” Urban Living
David Roberts, Vox.com, April 11, 2019
In a five-part series, Vox.com is reporting on Barcelona, Spain’s plan to turn half its streets for cars into public spaces, creating “superblocks” open to walking, bicycling, and general congregation. Barcelona’s regular block pattern allows for superblocks that are nine square city blocks in size, with a vision of 6,000 residents per superblock. Vehicular traffic will be rerouted around the superblock in one-way directions, limited to a speed of about seven miles per hour, to enhance the public domain and encourage walking as the main mode of transportation.