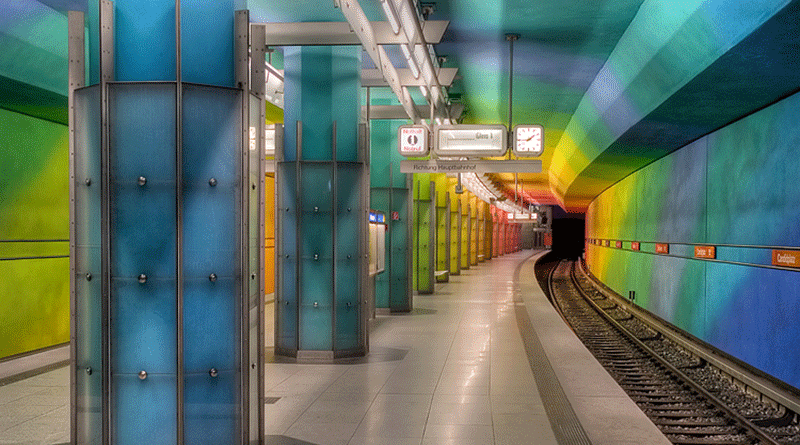 The Candidplatz U1 subway station in Munich, Germany. Image by user Syntaxys, licensed by CC BY-SA 3.0.

Lyft Expands Wheels for All Grants in NJ
Gabrielle Saulsbery, NJBiz, August 1, 2019
Lyft’s Wheels for All Grants Program will award Lyft ride grants to nonprofits in over 40 cities nationwide, including in NJ, beginning in September. Lyft created the program in 2018 to help nonprofits build connected, equitable communities and bridge transportation gaps for individuals and families. Vet’s Chat Inc. in Fort Lee and the Trenton Area Soup Kitchen in Trenton are among the NJ cities to receive program grants.

70-Story Tower Could Come to Part of Jersey City’s Avalon Cove Site
Jared Kofsky, Jersey Digs, August 5, 2019
Tower Cove Jersey City Urban Renewal has submitted preliminary and final site plans for the construction of a 70-story mixed-use tower in Jersey City’s Ward E. The project is located at 444 Washington Boulevard, roughly one block east of the Harsimus Cove Stop on the Hudson-Bergen Light Rail. The Jersey City Planning Board will review the developer’s application at the August 13th meeting.

$3 Million Sidewalk Project Coming to Branch Avenue
Chris Rotolo, The Two River Times, August 6, 2019
The Borough of Little Silver is advancing a $3 million project to bring sidewalks and curbing to Branch Avenue, a primary roadway into the Borough’s train station district. Little Silver Administrator Kim Jungfer said the curbing and sidewalk will run along the southbound side of Branch Avenue starting at the border of Red Bank and ending at the corner of the Little Silver NJ TRANSIT rail station. According to Mayor Robert Neff, Monmouth County will repave Branch Avenue from the Rumson Road intersection to the station in conjunction with the sidewalk project.

Proposed 10-Story Tower Near Bergenline Avenue HBLR Station Could Receive Tax Exemption
Jared Kofsky, Jersey Digs, August 6, 2019
West New York’s municipal government is expected to award a five-year tax exemption to a proposed mixed-use development project called Bergenline Station Apartments, located at 4901 Bergenline Avenue across the street from the Bergenline Avenue Station on the Hudson Bergen Light Rail Line. Approval for the ordinance that would grant the tax exemption is up for a final vote at the Board of Commissioner’s meeting this week.

Hoboken Mayor, E-Scooter Vendors Agree to New Fee
Eric Kiefer, Patch, August 6, 2019
Hoboken municipal officials will make significant tweaks to E-Scooter contracts with its vendors, Lime and Ojo, as the pilot program surpasses the halfway mark. The new contracts would provide the City with a 35-cent fee for every ride, which is to be reinvested in stronger enforcement, education tools, and local transportation infrastructure. Hoboken’s City Council will review the contract at their meeting this week.

Plainfield: Quin Sleepy Hollow, Largest Apartment Project in City History, Set to Open
Mike Deak, Bridgewater Courier News, August 8, 2019
JMF Properties will complete work this fall on the QUIN Sleepy Hollow in Plainfield, a 212-unit apartment building located between the Netherwood and Fanwood stations on the NJ TRANSIT Raritan Valley Line. The project is the largest single residential property to be built in Plainfield to date. Development interest has grown in the city, due in part to the introduction of one-seat rides to New York Penn Station. The city’s planning board is scheduled this week to hear a proposal for 42 apartments in a five-story building at the corner of South and Woodland Avenues.

Redevelopment of Isle Casino Property in Pompano Could Include a Tri-Rail Station
Mike Seemuth, The Real Deal, August 4, 2019
The Cordish Companies and Eldorado Resorts Inc. have partnered to redevelop the Isle Casino Racing Pompano Park into a mixed-use development project. The proposed redevelopment would be constructed in phases over a 10-year period and will include residential units, office spaces, hotel rooms and entertainment spaces. The South Florida Regional Transportation Authority’s board has granted conceptual approval to a Tri-Rail station on the property site.

All Aboard: Another TOD Hits the Tracks in RiNo
Margaret Jackson, BisNow Denver, August 5, 2019
Invent Development Partners President and co-founder Jon Dwight plans to transform two properties into a mixed-use TOD project, called Train Denver. The two properties bisect Walnut Avenue in the River North Art District (RiNo) of Denver, CO; one property is located in an opportunity zone. Train Denver is situated within steps of the 38th and Blake Commuter Rail Station, which connects to the Denver CBD and the airport. Construction is expected to break ground in late 2020.

You Can Now Pay for Your LA Metro Trip with a Flick of the Wrist
Ryan Fonseca, LAist, August 5, 2019
Los Angeles Metro officials announced that their new TAP wristbands are now available for transit riders and that other wearable payment tools will be released later this month. The TAP wristband payment works in the same way as a traditional TAP card and can be used at all Metro validators, gates, and fare boxes, and at all other LA County Transit agencies that accept TAP. Metro officials noted that they are working to develop TAP wearables to accommodate reduced fare riders as well.

Munich Plans Doors on Subway Platforms
Deutsche Welle, August 2, 2019
The City of Munich plans to install doors on subway platforms for underground trains and will be Germany’s first city to do so. The doors are intended to keep riders away from the tracks while trains are in motion and will only open once the train has come to a complete stop. This initiative will be tested at the Olympiazentrum Station starting in 2023. If successful, the MVV public transit agency will install doors in all 100 stations as part of a plan to digitize the network by 2028.

Vienna Subway Riders Vote Against Scented Subway Cars
Kira Grant and the Associated Press, Fox News, August 5, 2019
Vienna’s Public Transportation Authority, Wiener Linien, recently tested four different fragrances on its subway cars in an attempt to improve the travel experience for riders. The Authority pumped the scents through the train’s ventilation system as part of a one-month trial period in July, followed up by an online survey to determine a signature fragrance for the trains. However, rider participants voted against the implementation of a fragrance altogether.

Light Rail on the Right Track
PS News, August 6, 2019
Sydney’s light rail project took a giant step forward last week with the first trams traveling along George Street from Central Station to Circular Quay. Premier Gladys Berejiklian and Minister for Transport Andrew Constance waited at Circular Quay to greet the first light rail vehicle to reach the end of the line. The light rail project is anticipated to be open to daily commuters by the end of the year.

Introducing East Harbour, Toronto’s Newest Downtown Neighbourhood
Charles Liu, Real Insights, August 8, 2019
Adjacent to the downtown core, Toronto’s newest 60-acre development project, East Harbour, has entered into its early planning stages. The project is being designed as the largest planned commercial development in Canada and as a future regional transportation hub. Four transit lines currently meet at East Harbour and at least one more transit line is planned. Toronto Mayor John Tory has applauded the development of East Harbour for the potential economic benefit it could bring to the City.