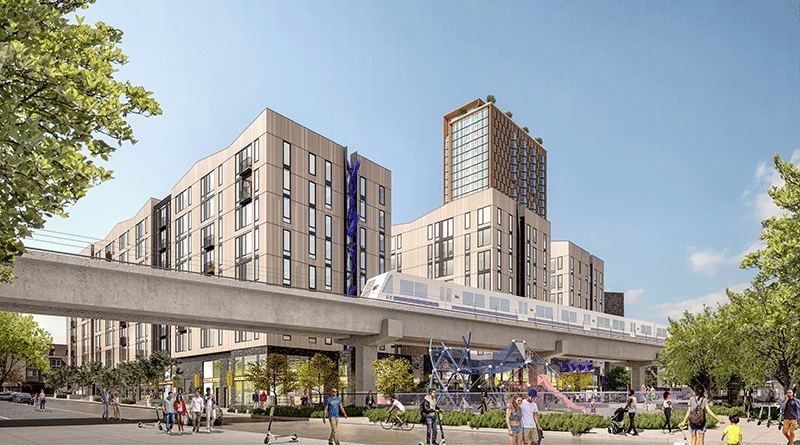 Rendering of buildings planned for 500 Kirkland near BART. Image courtesy of Panoramic Interests.

Canal Project Would Expand Operations at Hoboken Terminal and Enhance Resilience: Study
Corey W. McDonald, The Jersey Journal, August 23, 2019
NJ TRANSIT’s Long Slip Fill and Rail Enhancement project in Hoboken is moving forward. The project will fill in an existing canal just south of the Hoboken rail yard in order to expand train storage at the terminal by adding six tracks, high-level platforms, a walkway to the terminal and a facility for crew members. The new facilities will be used during emergencies such as flooding to queue trains. NJ TRANSIT originally identified the project in 2000 and revived it as part of the agency’s Resilience Program following Superstorm Sandy.

In Latest Attempt to Get a New Tunnel Built Under the Hudson River, Officials Lower Cost of Project
Jonathan D. Salant, NJ Advance Media for NJ.com, August 25, 2019
On Friday, New Jersey and New York officials submitted a new application requesting $4.4 billion in federal Capital Improvement Grant funding for the Gateway Tunnel Project after cutting project costs by $1.4 billion. The State of New Jersey, the State of New York, the Port Authority of New York and New Jersey, and Amtrak lowered the Gateway project’s budget to $9.5 billion for the new Hudson River tunnel and to $1.8 billion for repairs to the existing tubes that were damaged by Superstorm Sandy, while simultaneously increasing their respective shares of funding for the project. The revised application was submitted to the Federal Transit Administration after the Trump administration raised concerns over the use of federal loans to cover part of the local share of funding.

Mack-Cali Pays $65M for Jersey City Lot, Plans 804-Unit Development
Jared Kofsky, Jersey Digs, August 27, 2019
According to the Mack-Cali Realty Corporation, the company acquired the site of 107 Morgan Street in Jersey City’s Ward E for $67 million. Mack-Cali’s recent quarterly earnings report lists 107 Morgan Street as a future development to comprise 804 residential apartments. The 107 Morgan project was referenced in a presentation at the company’s Investor Day as part of a “waterfront strategy,” along with other potential developments including Urby’s 1,500-unit second phase, a combined 2,614 new units as part of Harborside 4, 8 and 9, and new buildings at Port Imperial.

Hoboken Set to Use Eminent Domain to Take Union Dry Dock from NY Waterway
CBS New York, August 28, 2019
The City of Hoboken is considering whether to use eminent domain to reclaim the Union Dry Dock site back from NY Waterway. The ferry service provider purchased the parcel to use as a refueling station and maintenance depot, but Hoboken wants to use the property to complete its waterfront promenade. Many Hoboken residents rely on the ferry to commute into Manhattan.

Google Unveils Its Vision for Downtown San Jose Transit Village
Emily Deruy and George Avalos, The Mercury News, August 22, 2019
At a community meeting on August 22, Google revealed the first look at what could potentially be a vibrant, mixed-use TOD community for the City of San Jose. Google’s plans are designed to transform former industrial land west of Highway 87 into a mile-long stretch comprising thousands of new homes, public plazas, offices, cultural space, art, and at least one hotel. The development will be located proximate to Diridon Station, and provide access to BART, Caltrain, buses, and potentially, high-speed rail. If all goes according to plan, the City Council will hold a vote on the development in fall 2020.

Nauset Constructing Historic Boutique Hotel in Central Square
John Lankton, Patch Cambridge, MA, August 26, 2019
Sean Casey, LLC and Hay Creek Hotels are working together to transform a historic, mixed-use building into a 67-key boutique luxury hotel in Cambridge, MA. The renovation project, 907 Main, located at the corner of Main and Columbia Streets, will contribute to the designated Historic Central Square District. The transit-oriented development is adjacent to the MIT campus, a five minute walk to Central Square Station, and within walking distance of Kendall Square, considered to be one of the foremost technology markets in the US. Completion of the project is slated for the end of 2019.

Oakland Housing Project with 1,000-Plus Units Moves Forward
Adam Brinklow, Curbed San Francisco, August 26, 2019
The Oakland Planning Commission recently approved a high-rise, mixed-use TOD project at a site currently used for parking. The project site, 500 Kirkham, is located in an opportunity zone near one of the Bay Area’s busiest transit hubs and the only BART station directly connected to every other station in the Bay Area, the West Oakland BART. According to developer Panoramic Interests, design plans include 1,032 apartments and 41,135 square feet of commercial and flex space across three buildings. The proposal requires further approvals from the Planning Department before plans are finalized.

MPC Will Survey Residents on What Kind of TOD They Want at 95th Red Line Stop
John Greenfield, Streets Blog Chicago, August 26, 2019
Last week, Mayor Lori Lightfoot and the Chicago Transit Authority (CTA) announced the 95th Street Transit-Oriented Development Planning Initiative. The goal of the initiative is to encourage new development on the eight parcels located in proximity to the recently rehabilitated 95th Street Red Line and bus terminal. The eight parcels are located on State Street north of 95th Street. The Metropolitan Planning Council (MPC) will be leading a community input process that will inform development of the site.

Planning Board Approves Union Square Phase One Revitalization Project
Denise Keniston, The Somerville Times, August 28, 2019
Last week, the Somerville (MA) Planning Board approved Phase One of a larger $1.5 billion Union Square Revitalization (USQ) Project. Phase One of the mixed-use TOD project, referred to as the D2 block, is a four-acre site at the corner of Prospect Street and Somerville Avenue. Master developer US2 is also providing $1.5 million in improvements to the Union Square MBTA station, including the addition of the new Green Line Station, to draw residents and commuters to the new development. US2 expects to break ground later this year and complete construction in 2021.

UPDATED: Long-Delayed Ottawa LRT Will Open to Public On Sept. 14
Beatrice Britneff, Global News, August 23, 2019
Ottawa Mayor Jim Watson recently announced the long-delayed launch of the first line to operate on the city’s new light-rail system. Ottawa commuters will be able to ride the Confederation Line starting on September 14th. According to officials, OC Transpo will run a series of “operational drills” for the remaining weeks leading up to the grand opening of the line.

Here’s Who Will Build the New LRT in Brampton
Ashley Newport, InBrampton.com, August 26, 2019
Infrastructure Ontario (IO) and Metrolinx announced that Mobilinx will design, build, finance, operate and maintain the C$1.5 billion Hurontario Light Rail Transit project. Once completed, the Hurontario LRT will run from Port Credit GO at Lakeshore Road in the south to the Brampton Gateway Terminal at Steeles Avenue in the north. The LRT will make 19 stops providing connections to the Port Credit and Cooksville GO stations, Mississauga Transitway, GO Transit’s Milton line, Lakeshore West rail lines, and MiWay and Zum transit lines. Design work will likely begin shortly after the contract is awarded to Mobilinx.

Plans Scaled Back for $750M Albion Exchange
Ted Tabet, The Urban Developer, August 27, 2019
Queensland-based Geon Property has scaled back plans for the beginning stage of its ten-stage TOD in Brisbane’s inner-north to align with Council and community feedback. The Albion Exchange development project will rejuvenate a 4,900 square meter site,  adjacent to the existing train station. Stage one of the Albion Exchange masterplan includes access to the Albion Train Station and a A$28.7 million upgrade to transportation facilities among other improvements.