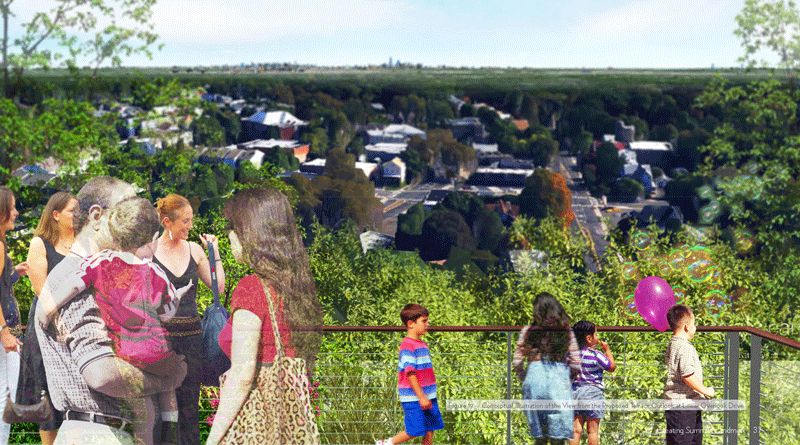 A Year-End Update with Plainfield Mayor Adrian O. Mapp
Jennifer Popper, TapInto.net, December 2, 2018
Plainfield’s mayor believes the past year has put his town “on its way to regaining its place as a focal city in the state of New Jersey.” One aspect of Plainfield’s progress is a mixed-use development near the Netherwood Train Station to open in early 2019. Additionally,Mayor Mapp has been working with other members of the Raritan Valley Line Mayors Alliance and New Jersey legislators to push for one-seat-ride service into New York City for commuters.

Lincoln Park considering new three-story mixed-use building for downtown
Jai Agnish, North Jersey Record, December 3, 2018
Lincoln Park’s Planning Board is reviewing a proposal by Meridia Capodagli Property for a three-story retail and apartment building next to the borough’s train station, as well as a new downtown streetscape. The Meridia Transit Project falls within the Lincoln Park Station Redevelopment Area and includes 20 affordable apartment units. It will be the first of two planned mixed-use buildings for the borough.

SoundOff: Summit Converting Abandoned Rail Line Into Park
Russ Crespolini, Patch, December 5, 2018
The City of Summit will hold a public meeting to gather community feedback on the proposed conversion of the Rahway Valley Train Line into a pedestrian park. The meeting will begin with a presentation on the project. Phase 1 of the work is almost complete, and the feedback will be used to plan possible future phases.
Update: The meeting was held on December 9 with notable large attendance. A synopsis of the event can be found here.

Study: Public Transportation Use Linked to Better Public Health
University of Illinois at Urbana-Champaign, Medical Xpress, November 28, 2018
A study by the University of Illinois at Urbana-Champaign finds that, for every one percent increase in mass transit ridership in the US, there is a resulting 0.473 percent decrease in the obesity rate. The study uses data from 2001 and 2009, and does not include analysis of more recent transportation options such as Uber, Lyft, and bike-share programs. The study also accounts for lifestyle differences in areas such as income level, public transit funding, and health care coverage.

Landmark Realty’s Crescent at Chevy Chase Receives Unanimous Approval from Montgomery County Planning Board
PR Newswire – PRWeb, BizJournals, December 3, 2018
Landmark Realty has received approval from the Montgomery County Planning Board for one of the first TOD projects proposed for the future Purple Line light rail in Maryland. The Crescent at Chevy Chase will include an underground parking garage, over 100 rental apartments, and connections to a shared bike/pedestrian path to the Capital Crescent Trail and Connecticut Avenue. Collaboration between the public and private sectors, as well as local community input, informed the project plan.

E Kidwai Nagar Project: ‘An Example of How Not to Plan’
Risha Chitlangia and Richa Banka, Hindustan Times, December 3, 2018
The East Kidwai Nagar Redevelopment Project’s issues with traffic congestion and water supply have been brought to the attention of Delhi’s high court. The project was built with more parking spaces than recommended by TOD norms set out in the Master Plan of Delhi-2021. The developer states the new complex is not a TOD project, but experts say the project’s prime downtown location would have made it an ideal TOD example of Delhi redevelopment.

Proposed Train Service Could Bring New Development between Atlanta and Charlotte
Richard Lawson, Atlanta Agent Magazine, December 4, 2018
Brightline, a private firm based in Florida, has filed with the SEC to construct a 250-mile high-speed passenger rail service between Atlanta and Charlotte. Brightline has specifically stated to the SEC that it would also work to develop the land around the stations into TOD mixed-use neighborhoods to increase its returns.

New Effort to Push More Housing Near Transit Stations by Setting State Rules
Rachel Swan, San Francisco Chronicle, December 4, 2018
The new iteration of the More HOMES Act, SB50, would forbid California cities from limiting density within a half-mile of a transit hub,and also eliminate minimum parking requirements for developments. Its sponsor, State Senator Scott Wiener, has been fighting opponents who believe the bill will cause displacement and change the landscape of California’s neighborhoods, especially in cities such as San Francisco and Berkeley.