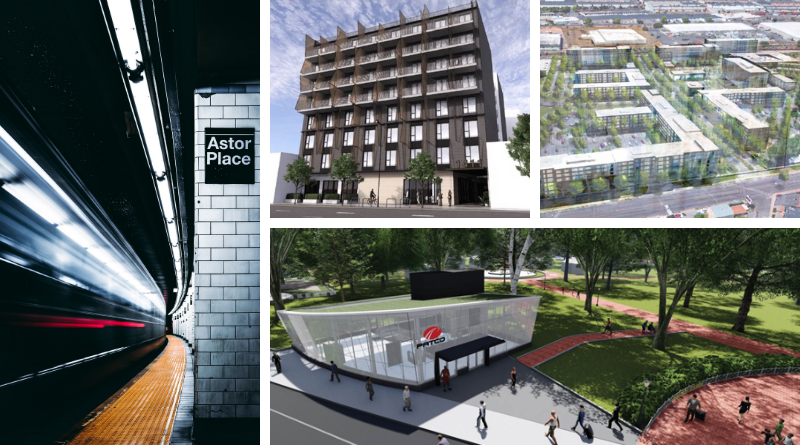 Where Transit Stands with COVID-19 Relief Bill and FY21 Omnibus Legislation
Mischa Wanek-Libman, MassTransit, December 21, 2020
Congress’s recent $900 billion relief package earmarks $45 billion for transportation, of which $17 billion has been allocated to transit, passenger rail, and private transportation providers. Transit will receive $14 billion, mostly for urbanized areas (UZAs). Amtrak will receive $1 billion and other transportation service providers will be eligible for $2 billion. The American Public Transportation Authority (APTA) had advocated for a $32 billion relief package for transit agencies, and notes that the current emergency funding to be vital to the industry’s survival. Moreover, the FY21 omnibus package will allot $86.7 billion to the U.S. Department of Transportation. National Infrastructure Investments (TIGER/BUILD grants), the Federal Transit Administration (FTA), and the Federal Railroad Administration (FRA) will be beneficiaries of this funding.

NJ Transit is conducting its third COVID-19 survey. Here’s why taking it matters.
Larry Higgs, NJ.com, December 19, 2020
NJ TRANSIT launched a third survey of its passengers during the pandemic. Transit experts believe the information from these surveys is vital to ensure timely service, planning of bus, rail, and light rail service, and sanitizing equipment and facilities. The first survey focused on who continued to commute by trains and buses during the spring coronavirus surge. The second survey, conducted in June, revealed whether passengers followed mask mandates, followed other precautions, and reviewed the agency’s sanitizing and cleanliness efforts. Riders have until December 23rd to complete the third survey.

NEW YORK—Regional Transit Operators Poised to Get Federal Aid, But Fiscal Worries Remain
Danielle Muoio and Erin Durkin, Politico, December 21, 2020
Congress’s approval of a $900 billion rescue package on Monday provides New York with a much needed $4.2 billion in transit aid— most of which will go to the Metropolitan Transit Authority (MTA). The city will also benefit from $100 million for the Port Authority of New York and New Jersey (PATH) and $655 million for Amtrak’s Northeast Corridor. While the relief package will stave off service cuts and layoffs, for now, the MTA projects a $3.2 billion deficit in 2022 and will fight for another round of aid under the Biden administration. Despite the current relief, both PATH and MTA are looking at cuts or delays to various projects, including redevelopment at John F. Kennedy International Airport (JFK) and the Gateway Program.

PENNSYLVANIA—PATCO Still on Track to Reopen Franklin Square Station Despite Pandemic Hit
Darryl C. Murphy, WHYY, December 22, 2020
The Delaware River Port Authority (DRPA) started the year on a high note, but the coronavirus pandemic upended the agency’s projected ridership numbers and revenues. Despite a projected $54 million revenue loss in 2021, James Hanson, DRPA CEO, says the agency has more than $400 million to fund its capital projects, including Franklin Square Station’s reopening. In the works for over ten years, the project will advance as PATCO expects to begin construction next summer and complete construction by 2024. To date, the agency has used $21 million of the $41 million in CARES Act funding received earlier this year, and with continuing federal funding for public transit in the region, expects to avoid layoffs and service cuts in 2021.

ARIZONA—South Phoenix Light Rail Line Gets 2 Boosts: A $530 Million Federal Grant and Financial Support for Impacted Businesses
Megan Taros, AZ Central, December 24, 2020
Valley Metro will receive $530 million from the Federal Transit Authority (FTA) to fund the remainder of their light rail expansion project. Phoenix City Council will provide additional financial aid to business owners directly impacted by the project’s construction. The federal funds make up 40 percent of the total estimated cost to construct 5.5 miles of track and a downtown hub and replace infrastructure in the surrounding area. City officials expressed confidence in the project that is moving forward with federal funds’ assurance after years of disruption.

Fair Lawn Zoning Board Carries Broadway Proposal for 18-Unit Apartment Building to Special Meeting
Rebecca Greene, TAPInto, December 22, 2020
At a recent Fair Lawn Zoning Board of Adjustment hearing, neighbors raised questions about water run-off, parking spaces, and circulation associated with a proposed 18-unit residential building. The project, located at Plaza Road and Broadway, will include two affordable units as part of an agreement by the mayor and council and would fulfill the town’s affordable housing commitment. The proposed project will be blocks away from the Broadway Train Station.

Sullivan: Economic Recovery Act of 2020 Is What N.J. needs to Rebound from COVID-19
Tim Sullivan, ROI-NJ, December 20, 2020
President Tim Sullivan makes the case for the New Jersey Economic Recovery Act of 2020, citing goals to create jobs, revitalize abandoned and contaminated properties, eliminate food deserts, and boost the state’s innovation ecosystem. The Act includes new programs to diversify the NJEDA toolkit to support sustainable growth, such as $50 million to create a Main Street investment fund that would make funding available to small businesses affected by the COVID 19 crisis. The Evergreen Innovation Fund would increase venture capital flow to companies founded by women and people of color. The Act also aims to improve existing programs, such as EMERGE, which will target credits to high-growth industries that pay good wages. In addition to these incentives, the Act includes robust anticorruption, oversight, and good governance reforms.

MARYLAND—Baltimore County Gets State Approval for Massive Redevelopment Of Former Martin Aircraft Plant in Middle River
Taylor Deville, The Baltimore Sun, December 22, 2020
The Baltimore City Council accepted the State’s designation of the former Martin Aircraft plant for transit-oriented development. The now-vacant factories have become “a blight to the community” despite plans to revitalize the area. The designation will support plans for pedestrian-friendly mixed-use developments within a half-mile of a transit station and will open funding streams and planning resources in support of the project. The property was also designated as an Opportunity Zone last year—a federal designation that supports breaks on capital gains taxes. Aviation Station, the proposed project, will include an indoor sports facility, a hotel, apartments, and retail space near the MARC commuter train station.

UTAH—UTA, Clearfield Working on Plan for Large-Scale Transit-Oriented Development at FrontRunner station
Mitch Shaw, Standard Examiner, December 22, 2020
The Utah Transit Authority (UTA) is working with Clearfield City and two development firms on a proposed transit-oriented development near the Clearfield FrontRunner Station. When completed, the new development will include up to 600,000 sq. ft. of office spaces, 67,500 sq. ft. of commercial retail spaces, and 1,000 new residential units at buildout. Moreover, the project will include improvements to transit and general infrastructure in the area, including a bus loop, a new park and ride facility, a transit plaza, new street connections, and open spaces.

TEXAS—Developers Expand Planned Mixed-Use Project Along Austin’s East Riverside Drive
Shonda Novak, Austin American Statesman, December 21, 2020
River Park, a mixed-use development in Austin, will expand in size and cost as the developers plan to add more than 10 million sq. ft. of new development to the project. Project developer, Michael Piano, believes that its location and size will help address challenges of housing supply, affordability, connectivity, and mobility in the city. The proposed development has faced opposition from critics who fear that the project will add to ongoing gentrification in the city. The developers plan to create a walkable, connected, transit-oriented development that will align with Austin’s goals, including affordability, by adding 40 below-market-rate units to the project.

INDIA—DDA to Offer 1,210 Flats in its New Housing Scheme in January
The Hindustan Times, December 24, 2020
The Delhi Development Authority (DDA) approved a series of proposals on housing and transit-oriented development in the city. Foremost, the agency plans to launch a new housing scheme in January that will offer for sale 1,210 high and middle-income flats. This approval was in conjunction with a proposal to implement development control norms for unauthorized colonies in the city. This move comes a year after the country’s central government started giving ownership rights to residents of 1,731 unauthorized colonies in the City of New Delhi. The development control norms will pave the way for planned development in these colonies. Moreover, the DDA has revised the City’s TOD policy and identified 12 locations to develop as per the new TOD norms.