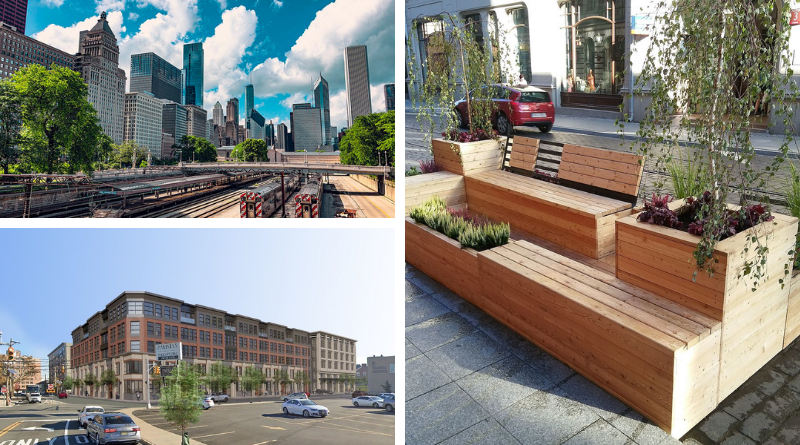 In On the Horizon: Planning for Post-Pandemic Travel, a new report published by the American Public Transportation Association, researchers from the Urban Institute and the Center for Neighborhood Technology detail how transit agencies are adapting service to better reflect equity priorities and respond to changes in ridership. In one example, Pittsburgh increased transit service by 37 percent in neighborhoods that are predominantly people of color and low-income individuals. Additionally, an analysis of fare free policies found that “most American transit systems collect relatively little from fares.” Thus, according to Yonah Freemark, Senior Research Associate at the Urban Institute, “We should be open to the idea that fares are not a top priority if your goal is to ensure access to as many as possible.”

Six Improvements Worth Celebrating within Flawed Infrastructure Bill
Benito Pérez, Streetsblog, December 9, 2021
Several new provisions in the recently-passed infrastructure law will make targeted enhancements to the nation’s mass transit and active transportation infrastructure. Amtrak is set to receive tens of billions of dollars to modernize its network, and a subtle change in the agency’s charter calls for it to prioritize passenger service and connectivity over merely making a profit. Public transit will receive a once in a generation investment and the funding sets aside resources for bikeways, new sidewalks, and micromobility projects. These kinds of improvements can enhance livability and safety in transit-rich areas. The law also requires that when more than 15 percent of total traffic injuries and fatalities involve cyclists and pedestrians, a state must apply at least 15 percent of its Highway Safety Improvement Program funding toward proven safety countermeasures that aim to lower that percentage. This, in addition to a new dedicated Vision Zero grant program, could lead to safer, more walkable streets.

Why U.S. Infrastructure Costs So Much
Laura Bliss, Bloomberg CityLab, December 8, 2021
Researchers from the NYU Marron Institute of Urban Management examine the Boston Green Line Extension project as a case study for ballooning infrastructure costs. They attribute cost-overages to several factors: inexperienced management, over-design, and the politics of public input—such as a pedestrian path added late into the process. They conclude that if costs are not better controlled in the future, investment from the new infrastructure law will build far less than it could.

JERSEY CITY—US $96 Million Land and Construction Loan Closed by SCALE Lending
Construction Review, December 8, 2021
The Namdar Group secured financing for two high-rise multifamily developments in Journal Square. The first project will comprise 235 units, while the second will bring 576 units to the area. Both will be situated close to Journal Square Transportation Center, which offers service to New York City and Newark.

HACKENSACK—Developer Looks to Advance Plan for 110-Unit Downtown Hackensack Project
Jared Kofsky, Jersey Digs, December 7, 2021
Development group Minervini Vandermark Melia Kelly (MVMK) has submitted an application to construct a five-story, 110-unit mixed-use development in downtown Hackensack. The complex, which would include 156 parking spaces, would be located within walking distance of both the NJ TRANSIT Hackensack Bus Terminal and the Anderson Street Station on the Pascack Valley Line.

RED BANK—Rail at Red Bank Could Open 57 Apartments Next Year
Olivia Liu, Asbury Park Press, November 29, 2021
The Rail at Red Bank is a TOD project currently under construction  opposite the NJ TRANSIT Red Bank Station. The 57-unit development will include 51 market-rate units and 6 affordable units, to be allocated by lottery. The four-story building will also include retail space on its ground floor, the first tenant of which, an açai bowl and smoothie shop, has already signed a lease.

NEW BRUNSWICK—New Brunswick Zoning Board Approves 10-Unit Mixed-Use Building on French Street
Chuck O’Donnell, Tap Into New Brunswick, November 23, 2021
The New Brunswick Zoning Board approved an application from Edison-based developer Chelsea Builders for a four-story mixed-use structure. The ground floor is planned for use by a small business, while the upper floors will comprise ten residential units. The site is situated less than a mile from both the NJ TRANSIT New Brunswick Station and the Coach USA bus park-and-ride in New Brunswick.

ILLINOIS—Chicago Announces Largest Investment in Affordable Housing in City’s History
Nathaniel Bahadursingh, Archinect News, December 9, 2021
Officials announced the largest investment in affordable housing in Chicago’s history. The City will devote more than $1 billion to create and preserve affordable housing through the current round of the Low-Income Housing Tax Credit (LIHTC) funding. The program will support 2,428 housing units in 24 development projects, twice the number of units and projects supported by the LIHTC in 2019. The Chicago Department of Housing selected the projects through the nation’s first Racial Equity Impact Assessment of the LIHTC. Two-thirds of the developments will be located in Chicago’s South and West Sides.Famartin | Wikimedia Commons

TEXAS—Federal Officials in Houston to Investigate Highway Project
Juan A. Lozano, the Associated Press, December 6, 2021
Stephanie Pollack, Deputy Administrator of the Federal Highway Administration (FHWA), visited Houston, Texas, to hear concerns from residents and community groups about the I-45 highway expansion project. FHWA has paused planning for the project until an investigation can be conducted into whether the $9 billion expansion will violate federal anti-discrimination and environmental laws. One community leader from Houston’s Fifth Ward, which is in the project area, expressed that this project is just one more in a long line of infrastructure projects that have negatively impacted minority and low-income neighborhoods: “We have lost residents. We lost businesses,” Joetta Stevenson said.

MASSACHUSETTS—Boston’s New Mayor Promised Free Public Transit. Can She Make it Happen?
Joseph Winters, Grist, December 6, 2021
Boston Mayor Michelle Wu made headlines by launching a two-year, fare-free program on three bus routes in the City. Such fare-free programs require that transit agencies identify new funding streams to replace lost revenue, though expenses are typically lower as about 20 percent of operating budgets are usually spent on fare enforcement and collection. Free transit, however, may not have the desired effect without additional attention paid to service quality improvements, such as frequency, reliability and well-maintained infrastructure. Wu’s current strategy is to work slowly, showcasing the pilot projects to demonstrate feasibility and build support for funding a broader fare-free program among state officials who control the Boston region’s transit authority.

Note to Store Owners: Not All Holiday Shoppers Drive
David Zipper, Bloomberg CityLab, December 8, 2021
Parking remains a concern for many business owners, who claim revenue loss from eliminated spaces despite a growing body of research finding quite the opposite. A recent study from Portland State University, for example, found that, in one car-oriented community, 40 percent of restaurant, bar, and convenience store customers walked, biked, or took transit. Business owners’ perceptions about the effect of parking on sales might be attributed to their personal experiences, rather than on their customers’ experiences. Local officials looking to convince concerned business stakeholders may wish to employ strategies such as a customer survey as well as small pilots that convert only a space or two into a shared public amenity. Such pilot programs may serve as a new attraction for nearby businesses.

MARYLAND—Prince George’s Climate Plan Proposes Swift Action, But How Does It Address Transportation and Land Use?
Bill Pugh, Greater Greater Washington, December 1, 2021
Bill Pugh, a fellow at the Coalition for Smarter Growth, advocates for more ambitious transportation strategies for the recently-released Climate Action Plan of Prince George’s County. For example, although the plan mentions shifting a small number of trips to transit and active modes, it lacks actionable steps to achieve this objective. For land use goals, however, the plan specifies how to better manage growth and calls for 75 percent of new development to occur within designated “activity centers.” It also calls on county leadership and planners to prioritize growth in regional transit centers and historic downtowns.

CALIFORNIA—Housing Near Caltrain? Stanford’s Proposal Nets Mixed Reaction
Gennady Sheyner, Palo Alto Weekly, November 24, 2021
Palo Alto planners hope to convince citizens and elected leaders that a Stanford University proposal to build hundreds of apartments adjacent to the City’s CalTrain station is a winning strategy for smart growth. A key issue with the proposed development is the City’s minimum parking requirements, which Stanford argues must be reduced to make the transit-adjacent housing development financially feasible. Another obstacle to the proposal is Palo Alto’s 50-ft. height limit, which the City Council’s ad-hoc committee on housing seems unwilling to lift.

MASSACHUSETTS—Push for New Housing Next to Shawmut T Station Gets Public Airing
Seth Daniel, Dorchester Reporter, November 24, 2021
Developer Trinity met with vocal community opposition to discuss its plan to construct a four-story, 81-unit structure on the site of a shuttered auto body shop located next to a rapid transit stop. Neighbors have expressed concern about potential traffic and parking issues as well as the project’s design. The project, if constructed according to current plans, would reserve half of the units for affordable housing. This would be the third time in recent years that a developer has attempted to build on the site, immediately adjacent to the MBTA’s Red Line, which offers service to downtown Boston.

SOUTH AFRICA—Reconstructing Roodepoort’s Historical Heart
Jarryd Westerdale, Roodepoorte Record, December 2021
Work in Roodepoort, about 20 km (12.4 mi) from the Johannesburg central business district, will bring newly paved walkways, improved parking, and a new storm water system to the community. The Johannesburg Development Agency (JDA) project is part of its TOD plan for the station area, the focus of which, the 110-year old Roodeport Station, was gutted by fire in 2020 after years of decay. Details regarding the station and restored service are not yet final, but current plans call for a new two-story station that would span the tracks.

April 22, 2010 Steph_Admin Comments Off on TOD Comes to Baltimore, Maryland