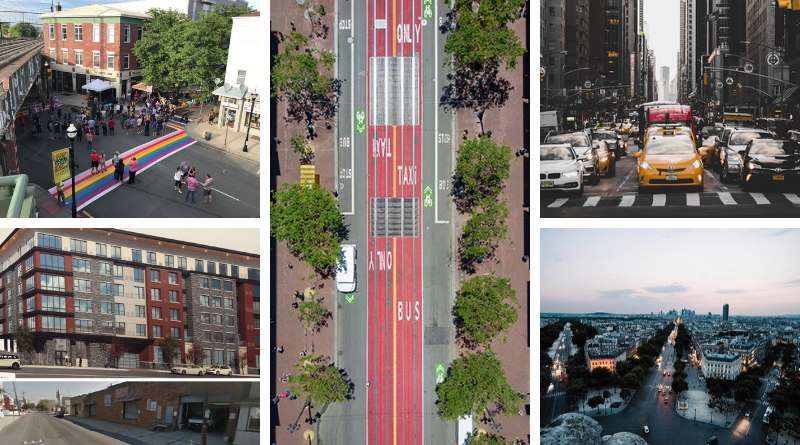 This Small N.J. City Has Been Quietly Reinventing Itself into an Arts Hub
Brianna Kudisch, NJ.com, February 15, 2020
In Union County, the City of Rahway, a NJ Transit Village, is seeing an uptick in arts and business development. For over 20 years, Rahway Arts and Business Partnership (RABP) Managing Director Amy Garcia Phillips has been working to rebrand the city’s image with more music, art, comedy, theater, and community and cultural events and bring more activity to Rahway’s transit-accessible downtown.

Seven-story Residential Approved on Avenue E in Bayonne
Daniel Israel, The Hudson Reporter, February 15, 2020
The Bayonne City Planning Board recently approved a seven-story, multi-family residential development to be built at 90-102 Ave E. When completed, the building will comprise 70 residential units and 70 parking spaces. Plans for the building were met by opposition from residents who felt that the new construction would further aggravate competition for parking in the neighborhood. The development will redevelop the former site of the Bayonne Stainless Products warehouse, a quarter-mile away from the 22nd Street Station of the NJ TRANSIT Hudson-Bergen Light Rail and abutting the light rail right-of-way.

The Ride-Hail Utopia That Got Stuck in Traffic
By Eliot Brown, The Wall Street Journal, February 15, 2020
While the tech community and venture capital investors once called ride-hailing a panacea for America’s traffic problems, mounting evidence indicates that the use of these apps has increased urban congestion and pulled riders from both public and active transportation modes. As most Uber and Lyft users eschew shared rides – despite their lower costs – and drivers spend about 40% of their time cruising for passengers, these services have added to the already plentiful number of vehicles using limited space on city streets. One recent study found that ride-hailing was responsible for 13 percent of all driving in San Francisco, though significantly less in five other major cities. Another study found that in large U.S. cities, every mile of personal-car driving was offset by 2.5 miles of driving by a ride-hailing vehicle. [Subscription may be required.]

Amid Climate and Housing Crises, Cities Struggle to Place Housing Near Transit
Benjamin Purper, NPR, February 16, 2020
Many small but growing cities in America are struggling to keep up with rising housing demands. In Redlands, California, city officials plan to manage their increasing population and new train stations connecting the city to San Bernardino and Los Angeles with Measure G, a local municipal ballot that would exempt three “transit villages” from density and building height limitations. However, residents remain reluctant to change the small-town feel of their city as the March 3 special municipal election approaches.

Study: High-Density Housing Needed Near Transit Options
Elizabeth Dobbins, The Lowell Sun, February 16, 2020
The Massachusetts Housing Partnership Center for Housing Data released a research brief last December titled Transit-Oriented Development Explorer (TODEX) after analyzing housing density around 261 rapid transit, light rail, and commuter rail stations in the state. The study reported that increasing density to at least 10 homes per acre in station areas would yield an additional 243,000 housing units. Many cities, like those in the greater Lowell area, fall far below this level of housing density, with most station areas having between 1.2 and 1.5 units per acre.

Two Triangle mass transit projects get favorable nod from the feds. Will money follow?
Richard Stradling, The News Observer, February 17, 2020
Following the release of ratings for proposed transit improvements by the Federal Transit Administration (FTA), two North Carolina bus rapid transit (BRT) projects await funding.  The Chapel Hill BRT, with an estimated total cost of $141 million, has requested $100 million in federal funding. This project has received a “medium” rating. The Raleigh plan— with an estimated cost of $71.5 million, has been rated “medium-high.” Planners for this project have requested slightly less than half of the projected costs in federal funding. The GoTriangle Board awaits detailed reports on the calculation of these ratings.

Pinnacle Housing Group Affordable Senior Housing Hailed
Miami Today News, February 18, 2020
On Friday, city officials and developers Pinnacle Housing Group cut the ribbon at new affordable transit-oriented housing for seniors in South Miami-Dade. The property, Caribbean Village, is a 123-unit, seven-story development, the first of its kind in the area in over 25 years. Developers built a surface lot next to the building, allocating parking space for the nearby Miami-Dade County Transitway. The electric bus rapid transit system is expected to begin operations within the next two years.

Stressing Affordable Housing Over Parking, Latest MARTA-Adjacent Project Breaks Ground
Sean Keenan, Curbed Atlanta, February 18, 2020
A $62 million mixed-use development project beside Atlanta’s King Memorial MARTA Station broke ground earlier this week. According to project plans, 100 of the 305 apartments will be designated affordable housing units. The building will also include 10,000 square feet of ground-level retail space and 355 parking spaces—relatively low for the district. Developers Place Properties and Russell New Urban Development are set to begin construction in about six months and the property is estimated to be ready for move-in in 2021.

Victims of NIMBYism, Unite
Connor Dougherty, The Atlantic, February 19, 2020
As many cities struggle to keep up with the demand for housing, homelessness and “supercommuting” – driving at least three hours a day to and from work — are on the rise. Decades in the making, America’s housing crisis seems to have an easy answer at this time: build more housing and expand subsidies for low-income residents. However, the process itself is rarely ever as straight-forward. In this excerpt from his new book, Connor Dougherty tells the story of the rise of the YIMBY movement in America and the different groups that advocate for affordable housing and displacement protection.

Why are climate-conscious cities often the least affordable?
Nathanael Johnson, The Grist, February 19, 2020
This interview with New York Times economics reporter Connor Dougherty discusses one reason behind increasing housing costs in the most climate-conscious, clean-energy cities. As population continues to rise in many parts of the world, cities now face the choice to “grow up, grow out, or try to stop growing entirely.” Dougherty argues that while older waves of environmental conservationism lay the foundation for modern environmental justice movements, they focused on limiting density, keeping lot sizes large, and prohibiting multifamily buildings. The implementation of these policies resulted in housing that only the wealthy can afford.

FRANCE — Paris Mayor: It’s Time for a ’15-Minute City’
Feargus O’Sullivan, CityLab, February 18, 2020
Since taking office in 2014, Paris Mayor Mary Anne Hidalgo has pushed for a “radical overhaul of the city’s mobility culture.” Paris en Commun, Hidalgo’s re-election campaign seeks to remodel the city so that residents can access their needs within 15 minutes of their own doorstep through a short walk or a bike ride. Diagrams and sketches detailing this “hyper proximity” on Paris en Commun’s website, rouses discussions and criticism of Hidalgo’s aspirations as voters prepare for the elections in March.

INDONESIA — Developer Seeks Piece of Transit-Oriented Development Trend
News Desk, The Jakarta Post, February 21, 2020
Property developer PT Adhi Commuter Properti, a subsidiary of state-owned construction firm PT Adhi Karya, plans to sell over 4,000 residential units this year, valued at US$160.5 million. The firm anticipates high demand for units near the Greater Jakarta LRT, scheduled to begin operation in 2021. When completed, the rail project will include 3 lines and serve 59 stations on 83.6 km (51.9 mi) of track. It is being implemented by the Indonesian Ministry of Transport and is one of two mass transit projects currently under development in the area. The Jakarta provincial government is implementing the Jakarta LRT, which completed phase 1 in December 2019 and currently serves 6 stations on 5.8 km (3.6 mi) of track. Plans for the Jakarta LRT call for a total system length of 107.7 km (66.9 mi).