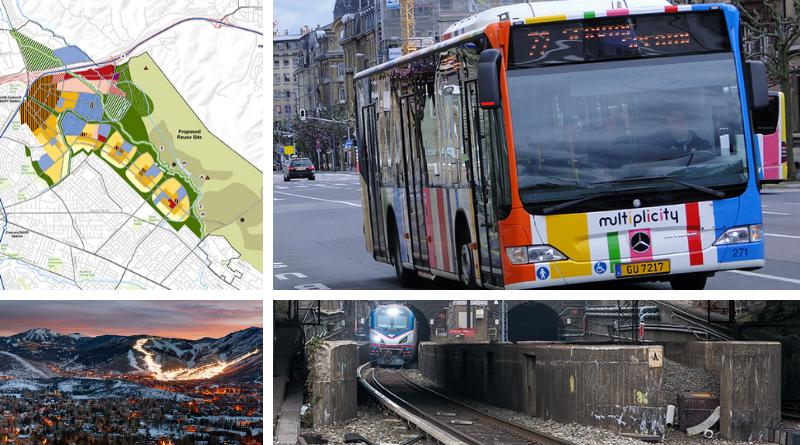 Latest Version of Hoboken Yard Redevelopment Plan Gains Approvals
Chris Fry, Jersey Digs, February 27, 2020
After months of debate, Hoboken city officials finally approved amendments to the Hoboken Yard Development Plan. All three sites are envisioned as commercial spaces and the latest plans limit overall development to a maximum of 1.3M square feet. The plans also include the renovation of the Hoboken Terminal ferry building and Warrington Plaza, and the construction of an outdoor marketspace.

More Pain for N.J. Commuters: Tunnel Repairs Could Cause Big Delays
Patrick McGeehan, New York Times, February 27, 2020
On Thursday, Amtrak decided that it would begin repairs to the two 109-year old tunnels that connect New York City and New Jersey, despite a lack of funding from the U.S. Department of Transportation. Both New Jersey and New York have agreed to fund the $100M project. Amtrak has been studying ways to repair the tunnels without major disruptions to service. According to New York Senator Chuck Schumer, “Amtrak had no choice but to go forward with its second-best solution because of the administration’s intransigence at refusing to move forward on the Gateway project.”

New Study Drops Cost of Passenger Train Comeback
Borys Krawczenuik, Citizens Voice, March 2, 2020
The new Lackawanna Cutoff Restoration Commuter Rail Study renews hope for passenger rail from Hoboken to Scranton. The study estimated the cost to reinstall track, upgrade bridges, and complete other required work along the 133 mile route to be nearly $284M. This is significantly lower than the 2006 estimate of $551M, due mostly to differences in scope between the two studies. The current study is timely and essential. As Congress deliberates the new transportation funding bill to provide for the nation’s transportation systems, the study demonstrates the need for federal money in support of the rail project.

DEP Seeks Input on New Land-Use Rules to Adapt to Climate Change
Jon Hurdle, NJSpotlight, March 3, 2020
On Monday, the NJ Department of Environmental Protection (DEP) held its third session of the NJ PACT (Protecting Against Climate Threats) and presented proposals for “green” building standards to the public. An audience of about 50 people were asked to comment on issues such as building in flood zones, stormwater management, and renewable energy. The session was a part of a series of public meetings designed to provide input on new regulations that will result from Governor Phil Murphy’s Executive Order 100 that directs the DEP to enact regulatory reforms to reduce carbon emissions and adapt to climate change.

Documentary Highlights Grassroots Efforts to Save Historic Resources
Preservation New Jersey, March 4, 2020
Over 100 historic preservation supporters gathered at Newark Symphony Hall on March 4th to commemorate the 25th Anniversary of PNJ’s “10 Most Endangered Historic Places in NJ” list, and to watch the premiere of the mini-documentary celebrating grassroots efforts to save NJ’s historic resources.

Debary Calls Timeout on Apartments on City’s South End
Beacon Online News, March 3, 2020
At a city council meeting last month, DeBary, Florida officials expressed concern about a rising number of apartment-only projects and decided to suspend new multi-family residential development around the city’s Sun Rail Station. Mayor Karen Sanchez and City Manager Carmen Rosamonda have emphasized the mixed-use vision of the city but support the moratorium. Currently one apartment project, Integra 289, is under construction, but other multifamily development is anticipated within the TOD district. The development moratorium is slated to last until September 25, 2020 or until the council decides to lift it.

Clare County Transit Corporation Asks for Public Transportation Millage
Pat Maurer, Clare County Review, March 2, 2020
On March 10th, Clare County, Michigan residents will vote on whether to support a tax increase designed to fund public transportation services by the Clare County Transit Corporation (CCTC). The CCTC hopes to implement a 0.2 mill increase, which will result in nearly $218,500 in the first year and an average increase in the property tax of $6.50 annually. A small portion may also be used for various public transportation-related initiatives of the Downtown Development and Brownfield Authority of the Cities of Clare and Harrison, as well as other entities.

Appropriate Fear: A 13,000-Unit Housing Development — Yes, 13,000 — Is on the Verge of Imploding
Joe Eskenazi, Mission Local, March 2, 2020
On March 12, Concord City Council is scheduled to reach a decision on the redevelopment project for Concord Naval Weapons Station. The proposed development includes 13,000 homes, of which a quarter would be allocated to affordable housing. The transit-friendly housing would be connected to two BART stations, an airport, and several freeways, and give access to jobs, retail, offices, parks, open space, and schools. Issues over the project’s labor agreement remain to be resolved and may stand in the way of the mixed-use, multi-faceted $6B development.

All Aboard: Transit-Oriented Development Is Expanding Miami
Matt Grossman, Commercial Observer, March 3, 2020
Numerous TOD projects are moving forward in Miami and in neighboring cities such as Fort Lauderdale, Boca Raton, and West Palm Beach despite a history of less than stellar, but improving, transit service. Last year, Miami tied Los Angeles for the worst average public-transit commute time in America according to Moovit, a commute-planning app. One such project, Paseo de la Riviera, is a $225 million mixed-use development located across U.S. 1 from the University of Miami campus, and adjacent to a MetroRail station. The 10-story building comprises a hotel and apartments.

Plan Says Sunnyside Yard Is the Largest Affordable Housing Development in NYC Since 1973
Michelle Cohen, 6SQFT, March 3, 2020
A new plan from the New York Economic Development Corporation (NYEDC) outlines plans for a 180-acre development in Sunnyside Yard in Queens. The former rail storage and maintenance hub would be the location of 12,000 affordable apartments, half of which would be available for families earning between 30 and 50 percent of the area median income (AMI). The remaining units would be set aside for affordable homeownership programs through Mitchell-Lama. The first phase of the plan calls for build out of Sunnyside Station that would connect western Queens to the greater New York area and the Northeast Corridor.

Luxembourg Becomes First Country to Make All Public Transit Free
Matt Hickman, The Architect’s Newspaper, March 3, 2020
This week, Luxembourg officials announced the country’s free public transit scheme that removes transit fares for all modes of public transportation in the country. Dany Frank from the Ministry of Mobility and Public Works commented on the intention behind the announcement, “We, the government, want the people to benefit from the good economy.” The system costs approximately $562M to operate, of which $46M comes from fares. The initiative’s greatest impact may be felt in Luxembourg City, which has the sixth-worst congestion for a global city with a population of less than 800,000.