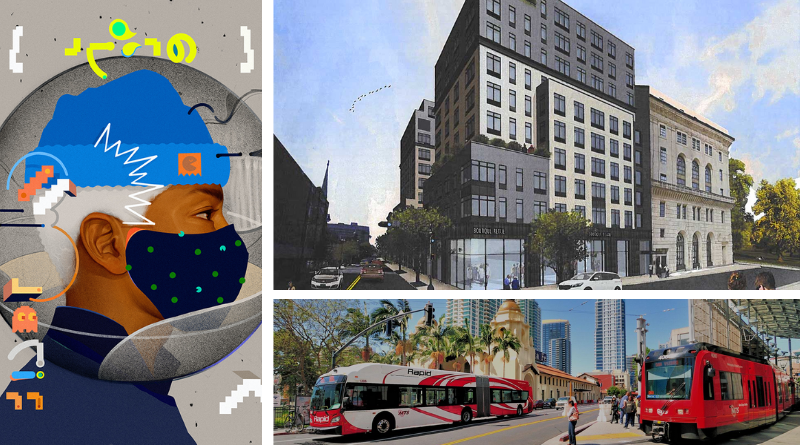 TEXAS—Pandemic Forces Austin and Capital Metro to Consider a Less Costly Start to Project Connect
Gabriel Perez, KUT 90.5, July 23, 2020
Plans for Austin’s $10B long-term transportation plan, Project Connect, yielded to funding constraints after a virtual planning meeting earlier this month. The new budget funds $7B of the plan over the next 10 to 15 years. The reduced investment means lower tax increases for residents, but still empowers the city to expand rail lines, build transit infrastructure, and launch a rapid bus service. The fund also includes $100M in equitable transit-oriented development, preventing displacement and ensuring equal access to the benefits of Project Connect.

Connected Cities: Has the Future Changed in Light of Covid-19?
Meagan Crawford, Smart Cities World, July 20, 2020
Director of Urban Economics Meagan Crawford lists three ways that the global coronavirus pandemic is changing the future of cities as societies adjust to a “new normal.” She highlights trends in green infrastructure and transportation, commercial real estate, and retail, and gives examples of how businesses may operate post-pandemic. As the popularity of remote work arrangements continues to rise, so does active transportation like cycling and walking—resulting in opportunities for more interesting and more congenial work-life arrangements and new forms of recreation.

Does the Bus Stand a Chance in the Era of COVID-19? Experts Say Yes
Eric D. Lawrence, Detroit Free Press, July 20, 2020
Despite “dire predictions” about the state of transit post-COVID, Detroit’s Executive Director of Transit Mikel Oglesby believes transit will continue to be an essential service. Though a slow return is expected of transit ridership, it remains the most affordable option for many low-income commuters. In Detroit, transportation officials and operators are working to maintain social distancing, enforce mask and face covering rules, and keep the experience of riding transit safe and clean.

The Pandemic Has Pushed Aside City Planning Rules. But to Whose Benefit?
Emily Badger, New York Times, July 20, 2020
Months into the pandemic, cities have responded to resident needs with remarkably rapid transformations and hundreds of examples of “pop-up” pandemic infrastructure like outdoor dining spaces and bike lanes. After seeing that cities can indeed move quickly when they’re motivated, critics like anthropologist-planner Destiny Thomas have begun speaking up about projects and initiatives have been sidelined and neglected, especially those that benefit marginalized communities. In this article, author Emily Badger examines the equity gaps in city planning processes and decision-making structures in California and all over America.

Why Flight from the Cities is Bad for the Suburbs, Too
Nicole Gelinas, New York Post, July 19, 2020
As more and more of the young and affluent leave Manhattan for the suburbs of Connecticut and New Jersey, the impact on cities and their outskirts could be catastrophic. Real estate values for large single-family homes and office parks are skyrocketing in suburban areas, and big cities like San Francisco and New York City risk losing a large portion of their tax- and consumer-base. Without an ample supply of dense, multi-family housing near transit, residents are destined to sit in traffic and face longer commutes. Those left in diminished urban areas may also suffer from reduced access to jobs and schools.

Russo Proposes 201-Unit Project Opposite Orange Train Station
Jared Kofsky, Jersey Digs, July 20, 2020
This week, the Orange Planning Board is scheduled to review and decide on a proposal from Russo Acquisitions, LLC, a development firm with plans to build a mid-rise development on the west side of Lincoln Avenue, just across the street from the stairs to the westbound platform of the Orange Station complex. The proposal includes details for 201 apartments, two levels of parking spaces, bike storage spaces, and other resident amenities. Russo Development is also the lead for another development nearby, a 209-unit mixed-use building called Vermella at Orange Station.

CONNECTICUT—Debate Over Hearing Delays Decision on Milford Development Proposal
Tom Ebersold, New Haven Register, July 22, 2020
In response to complaints about designs for a new mixed-use development planned for the site of a former 1855 funeral home, the New Haven Planning and Zoning Board will review plans for shared parking and has ordered a traffic study for the project area. Neighborhood residents expressed concern over plans to tear down several other historical buildings to make way for three new buildings for residential, office, and retail space. The 2.28-acre site is a block from the Milford Train Station, which has spurred debate over the amount of planned parking space.Rendering of the Forest Park DeBaliviere Metrolink Station via Pearl Companies

MISSOURI—$92 Million Development near Forest Park Metrolink Station Hits Roadblock as Competitor Pushes for Parking
Jacob Barker, St. Louis Post-Dispatch, July 20, 2020
Tensions are rising in St. Louis as two developers vie for development rights on properties next to the Forest Park-DeBaliviere MetroLink Station. St. Louis-based LuxLiving is challenging Pearl Capital Management, another prominent developer, over the latter’s purchase of the Metrolink’s station parking lot and application for a setback variance. LuxLiving is fighting to enforce a one-to-one ratio for parking spaces and apartments, arguing that Pearl Companies’ 361 parking spaces will not be enough to cover both the apartments and commuter needs for parking at the station.

TEXAS—DCTA Awarded $600,000 from FTA for Transit-Oriented Development Planning
Denton County Transportation Authority, July 20, 2020
Last month, the Federal Transit Administration awarded $600,000 to the Denton County Transportation Authority for preliminary planning for development along the Kansas City Southern freight rail line, which has been proposed for commuter rail service. The DCTA first needs to determine if the 25-mile corridor can add accessibility and mobility options for the University of North Texas area, Denton, Highland Village, Lewisville, and Eastern Denton County. The planning process will include creating the development policies for the area as well as planning and design of six potential station areas, a commuter connection to the DCTA’s A-train and Dallas Area Rapid Transit, and the potential for transit-oriented development.

MINNESOTA—Eagan City Council Approves Affordable Housing Complex
Andy Rogers, Sun This Week, July 20, 2020
Last week, the Eagan City Council approved the development of a 204-unit affordable housing complex as well as the creation of a 26-year tax-increment finance (TIF) district to be administered by the Dakota County Community Development Agency. The development by Real Estate Equities is close to public transit and major highways, as well as several malls and schools. It is considered 100 percent affordable housing under the community development agreement (CDA) and will be locked into affordability for the duration of the TIF. It is expected to break ground later this year and complete construction by 2022.

Transitway Investment Leads to Higher Regional GDP, Job Growth, and Accessibility
Christine Anderson, MN Transportation Research, July 20, 2020
In April, the Humphrey School of Public Affairs released a new study entitled “Value of Transitways to Regional Economies: National and Twin Cities Perspectives,” revealing important analyses on the impact of transitway investment to metropolitan areas. Researchers found that transitway investment unlocks economic potential and increases employment accessibility for residents by allowing them to reach places to “prepare for, get, and keep a good job.” While most research focuses on economic impacts and effects, this study focuses on impacts of access on both a regional and national level. The team also found that higher proportions of fixed-guideway transit (such as rail transit or bus rapid transit) directly affects GDP and job growth, by increasing access to employment, education, and workforce development opportunities, especially in areas with concentrated poverty and large populations of people of color.

OREGON—Affordable Housing for Families and Veterans Coming to Tigard
Oregon Metro, July 16, 2020
The Housing Authority of Washington County and Community Development Partners recently held a virtual groundbreaking for the construction of the Viewfinder, an 81-unit affordable housing building in Tigard Triangle, an area northeast of Tigard’s downtown. A tenth of the units in the six-story development will be reserved for veterans. The site is near two transit stations planned as part of the Southwest Corridor Light Rail Project, which will connect Downtown Portland, Tigard, and Tualatin.

CALIFORNIA—Transit Hubs Get Most Housing Under San Diego’s Affordable Homes Program
Ken Stone, Times of San Diego, July 15, 2020
On Wednesday, nonprofit Circulate San Diego released a report entitled “Equity and Climate for Homes” containing an analysis of nearly two years’ worth of data on projects developed under the city’s Affordable Homes Bonus Program (AHBP). The report showed that 97 percent of approved developments are located within a half-mile of a “high performing transit stop,” increasing the supply of both affordable and market-rate housing in the area. The researchers have concluded that the San Diego AHBP has brought substantially more affordable transit-oriented housing than previous density bonus programs implemented in the state. This month, the California State Senate is expected to review and decide on legislation that may extend the program to the rest of the state.

KENYA—Kenya Invites Bids for Construction of Planned Nairobi Railway City
By Patrick Mulyungi, Construction Review Online, July 24, 2020
The Kenyan Ministry of Housing and Urban Development is soliciting bids for the construction of the proposed Nairobi Railway City. The project will comprise a new rail station and accommodations for BRT and other public transit modes, which will form a nexus for commercial development including high-rises, multifamily housing, a cultural center, and a museum. The 425-acre development, which is a central part of the Nairobi Integrated Urban Development Plan, is expected to be implemented in three phases over the next 20 years. Proposals are due by August 20, 2020.

CANADA—RESCON: On the Right Track
Toronto SUN, July 20, 2020
Officials are optimistic that Ontario’s COVID-19 Economic Recovery Act will spur the development of housing and other transit-oriented projects next to or on top of transit stations in the greater Toronto area, bringing in billions of dollars in construction and economic activity. Integrating transit stations with residential developments is expected to bring higher-density, mixed-use communities along four of the province’s priority subway lines: the Ontario Line, the Scarborough subway, the Eglinton West LRT, and the Yonge North subway extension. The legislation aims to increase the supply of market-rate and affordable housing and access to transit, as well as provide services such as day care and recreational spaces in more compact communities.

Wesmont Station Picks up the Pace

January 21, 2011 Steph_Admin Comments Off on Wesmont Station Picks up the Pace

December 20, 2012 Steph_Admin Comments Off on Transportation and Health: Policy Interventions for Safer, Healthier People and Communities