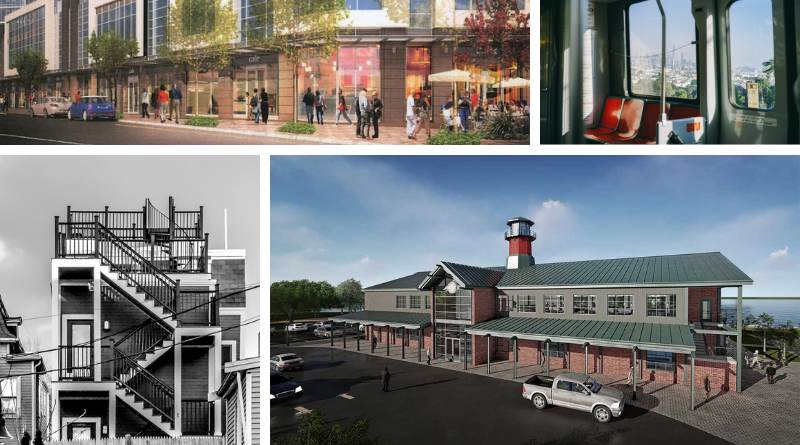 VIRGINIA—Life with COVID-19: Blacksburg Transit Prepares for Return of Virginia Tech Students
Katey Roshetko, WDBJ7 TV, July 31, 2020
Plans call for Virginia Tech students to return to campus soon. Students comprise 90 percent of Blacksburg Transit’s riders, thus ridership plummeted in March when students were sent home in the wake of the pandemic. The agency typically operates 32 to 36 buses a day, but has been operating as few as 8 to 10 through the late spring and summer. The agency has been working to prepare to safely transport students when they return by installing Plexiglass barriers, requiring masks of drivers and passengers, and cleaning the vehicles multiple times a day. The agency currently limits vehicles to nine passengers, but may need to rethink this cap to maintain operations. As most trips on the system take less than 10 minutes, increases in capacity may be considered.

APTA Gathers Public Transportation Leaders on Need for COVID-19 Relief Funding
Chris Galford, Transportation News Today, July 30, 2020
During a recent press conference, the American Public Transportation Association (APTA) called for at least $32 billion in emergency funding to support public transportation agencies throughout the U.S. The agencies, which employ more than 435,000 workers, have experienced huge financial losses as a result of reduced revenues, paused fare collection, reduced tax revenues, and increased operating costs. APTA urged Congress to include public transit funding in the next emergency funding bill. According to the organization, about a third of agencies have been furloughing, or plan to furlough, employees, and many have delayed capital projects. Despite this, the Republican-proposed Coronavirus Response Additional Supplemental Appropriations Act would allocate approximately $1 trillion in additional COVID-19 relief, but none to support public transportation.

As People Return to Work, Here’s How We Can Make Commuting More Inclusive and Sustainable
Maya Ben Dror and Kelly Hostetler, World Economic Forum, July 30, 2020
Crises beget opportunities and the COVID-19 pandemic has inspired Dror and Hostetler to explore ways to reshape commuting and other travel in its wake. Among the ideas they discuss are mobility service match-making platforms, dignity for those who rely upon public transportation, policies for flexible commuter benefits (including those that allow for daily changes in plans and schedules), pay-as-you-go parking, and sustainability. All told, these ideas address the need to improve the commuting, i.e., travel, experience for everyone and advance commuting that is more accessible, inclusive, and sustainable.

CANADA—Montreal-Area Public Transit Agencies Scramble to Make Up Projected $523M Loss
Isaac Olson, CBC News, July 29, 2020
Montreal’s public transit system continues to face financial challenges brought on by ridership declines and increased spending for cleaning and vehicle retrofit. The regional transport authority projects a loss of about Can$523 million in 2020. In mid-July, ridership on the bus network remained at 46 percent of expected levels, while the Metro ridership stood at 73 percent. The provincial government announced a Can$400 million aid package to the region’s public transportation system in June, but the advocacy group, Trajectoire Québec, has claimed that amount insufficient and has called for an increase in funding.

South Amboy Gets $5 Million Grant Towards New Ferry Terminal
Chris Fry, Jersey Digs, July 31, 2020
The next few years should bring remarkable change to South Amboy, New Jersey. BNE Real Estate Group and town officials recently announced the start of a $500 million redevelopment project, which includes a planned ferry terminal. The project will be centered on the area between the new ferry terminal and the South Amboy Station. When complete, the Manhattan Beach Club project will bring a total of 1,875 new residences to the community. The first phase will comprise 291 residences, and should be completed by summer 2022. Work on the ferry terminal will advance with the recent announcement of $5.3 million in funding from the U.S. Department of Transportation.

Board Approves Changes to Newark’s 155 Washington Street Project
Jared Kofsky, Jersey Digs, July 29, 2020
Developers continue to refine redevelopment plans for a site of a former 18-story parking garage in downtown Newark. The adaptive reuse project will construct a new four-story building and convert the development into a mixed-use space. The proposal includes a total of 250 residential units and more than 6,000 square feet of retail space, a gym, a café, and a roof terrace. The site is one block away from the Washington Street Station on NJ Transit’s Newark Light Rail line.

TEXAS—Proposed Project Connect Funding Plan Includes $300 Million for Anti-Displacement Efforts
Yoojin Cho, KXAN, July 28, 2020
Earlier this week, the Austin City Council approved a $7.1B investment plan for Project Connect, leading to an 8.75 cent tax rate increase for homeowners in the city. The initial investment plan includes a $300M budget for Transit Supportive Investments, which will be used to prevent displacement due to affordability issues that often come with the increase of transit-oriented development. Anti-displacement strategies that could help lower the cost of properties and rent in transit-proximal communities include rental assistance, rental stabilization, land acquisition, and community outreach efforts.

WISCONSIN—Madison Explores Zoning Code Changes to Address Housing Crisis
Dean Mosiman, Wisconsin State Journal, July 26, 2020
Madison officials are prioritizing the construction of more varied and affordable housing in the city. The pandemic has only exacerbated the city’s housing crisis, Mayor Satya Rhodes-Conway says, and the need for more affordable housing is an issue that “touches every person in our city and every neighborhood.” The city’s Comprehensive Plan reflects this effort, but zoning changes have yet to allow the development that Madison needs. To meet demand, the city will need to add about 2,000 new housing units a year or 40,000 units by the year 2040. An ordinance with guidelines on multi-family housing, accessory dwelling units, new zoning, demolitions, and the use of the city’s Affordable Housing Fund is still underway.

MASSACHUSETTS—In Newton, Proposal Would End Single-Family Only Zoning in Large Swaths of City
John Hillard, Boston Globe, July 23, 2020
Greater Boston officials have begun exploring legislation to end exclusive single-family home construction in residential areas around the City of Newton. Instead, members of the City Council are looking at creative ways to incentivize multi-family construction, especially near train stations along the MBTA Commuter Rail, Green Line, and several bus stops throughout Newton. The City Council’s Zoning & Planning Committee continues to work on an updated zoning ordinance for the city that will focus on creating more affordable multi-family housing, as opposed to market-rate or luxury housing. Note: Access to article may require registration for free account.

CALIFORNIA—BART Beats NIMBYs, But Not at Every Station
Benjamin Schneider, SF Weekly, July 22, 2020
Nearly 15 years into its fight to convert station parking lots to affordable housing, the 2018, bill AB 2923 (San Francisco Bay Area Rapid Transit District: transit-oriented development) is finally being implemented in several stations along BARTs coverage area. While this is a victory for many TOD and affordable housing advocates, many neighborhoods still meet the legislation with staunch resistance, disappointing many Bay Area planners. The Bay Area struggles to find unity and collaboration on transportation and TOD, prompting Assembly member David Chiu to introduce the Seamless Transit Act earlier this year in the hopes of creating a regional transit agency and “bring[ing] the regions transit agencies and counties into a closer state of collaboration.” However, due to pandemic-related delays, the bill remains in committee.

INDIA—HMDA Plans ‘Transit Oriented Development’ at Tarnaka Office
Sandeep Kumar, Telgana Today, July 26, 2020
As the Hyderabad Metropolitan Development Authority (HMDA) prepares to move from its head office in Tarnaka to Swarnajanthi Complex, the agency has also hired consultants to look into the possibilities of turning the Tarnaka site into a transit-oriented development. The office is located near an existing Metro corridor, between two stations at Habsiguda and Tarnaka. The study is in its first phase of development, the preparation of a detailed project report (DPR), concept designs, and other planning documents. Once the study is completed , the bidding process in Phase II can begin.

CANADA—1,200 Homes in Five Buildings Proposed Next to SkyTrain’s Burquitlam Station
Kenneth Chan, Urbanized Vancouver, July 27, 2020
Developers Intergulf Development Group recently submitted a rezoning and development application to city of Coquitlam detailing a proposal for a 1,200-unit transit-oriented, mixed-use development near SkyTrain’s Burquitlam Station. The plans include  $28M for the construction of four high-density towers and a low-rise building on a 3.8-acre site. The low-rise building will accommodate 47 non-market affordable rental homes, while the other buildings will provide a total of 1,550 units. Underground levels will provide more than 1,000 vehicle parking stalls and nearly 1,400 bike parking spaces.

September 25, 2020 Stephanie DiPetrillo Comments Off on Help NJTPA Plan for 2050!