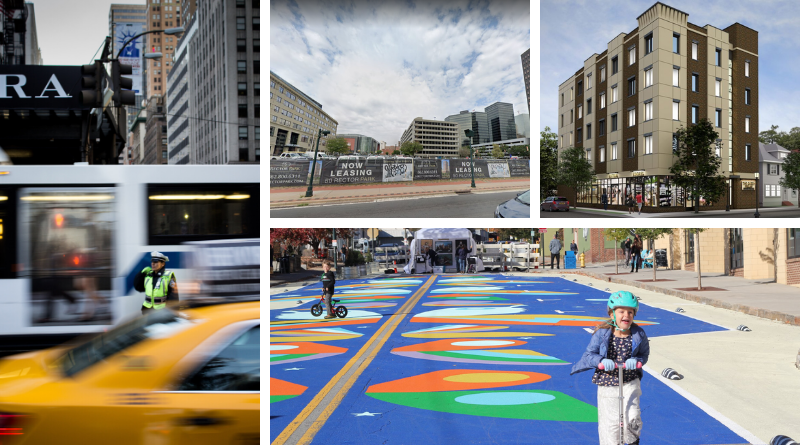 The Future of Transportation is Personal
Lane Florsheim, Wall Street Journal, July 7, 2020
While ridership on trains, buses, and rideshares dwindles, city-dwellers are looking to alternative, eco-friendly forms of transportation. Two-wheeled transportation like mopeds, bikes, and scooters are rising in popularity in the US as well as in Europe. Bikeshare programs like Citibike, Revel, and Lime are helping NYC commuters change their habits and adapt to more low-emission forms of transportation. Some cities are embracing closed streets and slow streets to accommodate and encourage the trend even when the pandemic ends. Note: Access to this article requires a WSJ membership.

Boom or Bus
Adrienne Day, Grist, July 2, 2020
Day interviews five industry experts on the future of public transit in the age of COVID, transit innovation, clean air initiatives, and transit equity. Chief concerns include fear of catching the virus that discourages riders from taking bus and rail and expected increases in pollution levels as cities reopen and more people choose to drive. At the same time, however, more and more people are pushing for the electrification of bus fleets and the improvement of bike and pedestrian-friendly infrastructure, especially in urban BIPOC communities that need affordable transportation options the most.

Upcoming Boraie Project Sites in Newark Could Receive New Designation
Jared Kofsky, Jersey Digs, July 7, 2020
On July 7, Tuesday, Newark Central Planning Board was scheduled to release its decision on development plans for several parcels along Newark’s McCarter Highway, nearly four months after the city’s Municipal Council authorized preliminary investigations. The proposals include one from New Brunswick-based development firm Boraie Development, which is working on a high-rise building called 777 McCarter or the second “Shaq Tower.” This project would add 370 residential units to the area. The other two projects, 10-18 Passaic Place and 930 McCarter Highway, are situated near the Passaic River, close to the FBI’s Newark office and the NJPAC/Center St. Station on the NJ TRANSIT’s Newark Light Rail line. All three properties are within a mile of Newark Penn Station.

24-Story Building Proposed for Bergen-Lafayette in Jersey City
Jared Kofsky, Jersey Digs, July 3, 2020
Developers FD Johnston Ave, LLC recently submitted a proposal to the Jersey City Redevelopment Agency (JCRA) for a transit-oriented development near the Liberty State Park station on the Hudson-Bergen Light Rail (HBLR) Line. The proposal for the 24-story mixed-use development is expected to include 168 residential units and nearly 8,000 square feet of retail and commercial space. According to the JRCA, only 11 of these are designated as affordable housing units. The development site is on Communipaw Avenue, 0.2 miles from the HBLR station.Rendering of 522-526 Park Ave by Taylor Architecture and Design

MARYLAND—Council Might Reward High-Rise Commercial, Residential Development over Metro Stations
Briana Adhikusuma, Bethesda Magazine, July 7, 2020
Officials of Montgomery County are set to deliver a verdict on a payment in lieu of taxes (PILOT) proposal from a developer looking to build on  property at 13 Red Line stations. According to a staff report, the PILOT would exempt the developer from 100 percent of real property taxes for 15 years, inviting commercial and residential high-rise buildings around Washington Metropolitan Area Transit Authority’s (WMATA) Metro stations. It could potentially bring more than 8,000 new residential units—20 percent of which would be affordable housing units—and more buildings that are at least eight stories. Council member Evan Glass came forward with support for the legislation, citing environmental reasons. At a press conference, he said, “Transit-oriented development is a way that we can reduce carbon emissions and help protect the Earth for generations and millennia to come.”

Can Tactical Urbanism Be a Tool for Equity? A Conversation with Mike Lydon and Tony Garcia
Kea Wilson, Streetsblog USA, July 6, 2020
Wilson recently interviewed urban studies experts Mike Lyndon and Tony Garcia, co-authors of the books Tactical Urbanism: Short-Term Action, Long-Term Change Vol. 1 – 5 and co-principals of Street Plans. A transcription of their interview is available on the Streetsblog website, detailing insights on the rapidly-evolving policies and strategies towards racial and social equity, and city responses to the COVID-19 pandemic.

CALIFORNIA—$24.8 Million Grant Helps Pay for Apartments in Modesto, Plus Bike Paths and ACE Rail
John Holland, Modesto Bee, July 5, 2020
Thanks to California’s Affordable Housing and Sustainable Communities program, Modesto will be receiving $24.8M to be used for much-needed affordable housing, public transit, and sidewalk infrastructure improvements. The funds will help build 74 low-income apartments and pay for bicycle paths, passenger car systems, and an express bus service extension. The city hopes to complete its housing projects by Fall 2022 and its bicycle and transit improvements by 2025.

VIRGINIA—Tysons was built around cars. How can it transform into a place people can walk?
George Kevin Jordan, Greater Greater Washington, July 5, 2020
This repost of a piece by George Kevin Jordan highlights important issues in transportation network design and the importance of walkability in creating thriving, healthy urban environments. In 2019, officials in Fairfax County optimistically envisioned Tysons to be a “true urban downtown” despite being notorious for its unwalkable streets.  Since then, Fairfax County Department of Transportation (FCDOT) has spent more than $300 million on pedestrian improvements including bicycle, pedestrian, and bus stop improvement projects. Virginia Department of Transportation (VDOT) is optimistic about the “ebbs and flows” of growth in the county in the years to come.

CALIFORNIA—Parking at Light-Rail Stations along L Line Extension Could Be Cut in Half
Javier Rojas, Daily Bulletin, June 29, 2020
The Foothill Gold Line Construction Authority recently announced plans to cut the number of parking spaces in half at five future light-rail stations: Glendora, La Verne, San Dimas, Pomona, and Claremont. The surface lots will instead be used to preserve the land near the station for future development that will serve the needs of the community. The modifications have yet to be finalized and reviewed for their impacts on housing, air quality, climate change, etc. Construction is slated to start in July 2020 and finish in 2025.

Reimagining an Antiracist America—Starting with Our Neighborhoods
Margery Austin Turner and Solomon Greene, Urban.org, June 19, 2020
As events of the past several weeks and months bring urgency for structural reform against systemic racism, Turner and Greene take to Urban.org to discuss six ways to reverse America’s legacy of segregation, disinvestment, and exclusion in metropolitan areas. To tear down systems that sustain racial injustice and inequity, Turner and Greene suggest that change must begin with reimagining local neighborhoods.

INDIA—Micromobility – the Emerging Growth Driver for India during COVID-19
Amit Gupta, Intelligent Transport, July 9, 2020
Responding to the need for mobility in India’s cities, founder and CEO of Yulu Bike, Amit Gupta, explores the role that micro-mobility is having and will have into the future. With vehicle ownership at 18 percent and more than half of the country’s workforce already beginning to return to the workplace, Gupta argues that alternative modes of travel are sorely needed. He discusses how modes that allow for solo commuting—cycling, e-bikes, and walking—have emerged as preferred forms of travel and how they can serve India’s population into the future.

EUROPE—Bicycles Are Pushing Aside Cars on Europe’s City Streets
Richard Weiss, Bloomberg, July 4, 2020
As the global pandemic strains public transit systems, European governments have been encouraging bike use and active transportation as a clean, green alternative, adding nearly 930 miles of new bike lanes and offering cash incentives for e-bike users. In Germany, cycling rates have doubled since the start of the pandemic, and bike shops are seeing an “unprecedented boom” in sales. The increase in popularity of cycling has also increased demands for appropriate infrastructure. Roadways in Rome are being converted into painted bike lanes and Berlin and Paris have set up pop-up lanes to accommodate more cyclists.