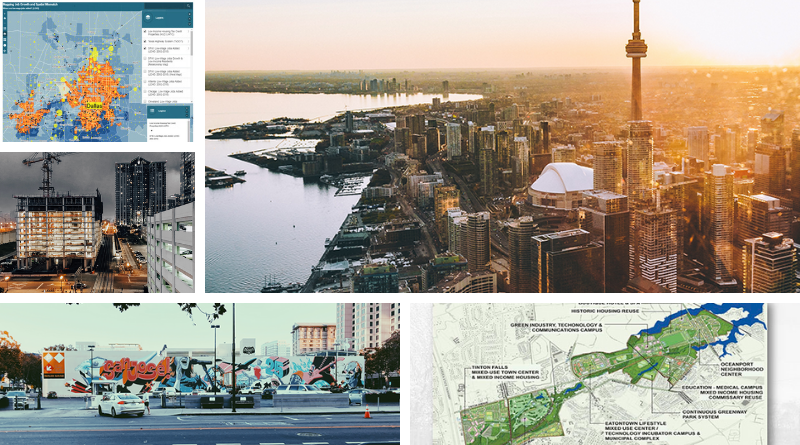 Transit Village Showcase Draws Crowd
The Fort Monmouth Economic Revitalization Authority (FMERA) recently hosted more than 85 developers and professionals at a showcase where they discussed the future of an 80-acre redevelopment area located near the NJ TRANSIT Little Silver Station. The “400 Area,” as it is known, is slated to become a mixed-used residential and commercial area featuring outdoor spaces, parks, and wide sidewalks to encourage walking, biking, and transit ridership. When completed, the redeveloped area will comprise 234 residential units (of which, 20 percent must be affordable) and up to 200,000 square feet of commercial spaces. It is one of three town centers planned as part of the Fort Monmouth redevelopment effort.

Officials Announce Westward Expansion of Hudson-Bergen Light Rail
Chris Fry, Jersey Digs, March 9, 2020
Governor Phil Murphy announced this week that a new light rail station and 3,700 feet of new track will be coming to Jersey City after years of delays. The project, 440 Connection, is part of a $220M mass transit project that will construct rail stations and extensions to a new terminal near the Hackensack River. This expansion will benefit the Bayfront development in Jersey City, a 95-acre parcel of land where developers hope to build 8,000 new units of housing.

Newark Approves Petition to Designate Downtown Area as Transit Village
Linda Lindner, NJ Biz, March 10, 2020
The Newark Municipal Council recently approved a proposal from Mayor Ras Baraka to petition the State to designate the area around the intersection of Broad Street and Market Street as a transit village. Broad and Market form the nexus of Newark’s central business district and is located between the Newark Penn Station (with access to the Northeast Corridor Line, North Jersey Coast Line, Raritan Valley Line, and Amtrak) and the Broad Street Station (with access to the Montclair-Boonton Line and the Morris and Essex Line).

Spatial Mismatch: When Workers Can’t Get to Jobs in the Suburbs
Earlene K.P. Dowell, America Counts (U.S. Census), March 4, 2020
What happens when jobs are located in one part of a region and workers live in another? Unemployment rates rise. A recent webinar hosted by the U.S. Census explored that situation for the Dallas, Texas area. Reza Sardari, traffic and revenue analyst at Austin-based Cintra, a private sector transportation infrastructure company, used LEHD Origin-Destination Employee Statistics (LODES), to show the disparity between where low-income families live and where suburban job opportunities are located. He used these data, together with information from the American Community Survey, the U.S. Department of Housing and Urban Development, and General Transit Feed Specification to map the extent of the “spatial mismatch” and to create a visualization of jobs moving to Dallas’s northern suburbs.

YIMBY Act Passes House of Representatives, Could Pave the Way for More Affordable Housing
Shane Reiner-Roth, Architect’s Paper, March 5, 2020
Early this month, the U.S. House of Representatives addressed H.R. 4351, otherwise known as the Yes in My Backyard (YIMBY) Act, a piece of legislation that could add density and affordable housing across the nation. If enacted, the legislation would streamline the process for funding and producing affordable housing and update zoning to accommodate high-density single-family and multi-family housing. The YIMBY act also includes the reduction of minimum lot sizes and floor area ratios and increases in transit-oriented development.

Why the US Sucks at Building Public Transit
Aaron Gordon, Vice.com, March 9, 2020
While nations around the world have steadily expanded their public transportation systems or have built wholly new ones, cities across the U.S. struggle to maintain their systems and find themselves hamstrung when trying to build and expand services. Aaron Gordon explores the factors that constrain American public transportation systems: high costs, ineffective planning, hyper-focus on highway systems, etc. He traces these challenges to the same root cause as that affecting the American healthcare situation — a political system in desperate need for reform — and explores a variety of political viewpoints and solutions to address this growing problem.

Immediate Steps Seen for Sunnyside Development Plan
Sadef Ali Kully, City Limits, March 10, 2020
Last week, the DeBlasio administration and Amtrak released the Sunnyside Master Plan, a long-term framework for future development in the area surrounding the Sunnyside Yard, serving the needs of Amtrak, LIRR and NJ TRANSIT. The plan outlines a $14B proposal for affordable homes, jobs, transportation, social infrastructure and open space on the 180-acre property. Approximately 12,000 affordable homes will be built on top of the master deck, serving households earning between 30 and 50 percent of the area median income.

Google Widens Downtown San Jose Transit Village Holdings
George Avalos, Bay Area News Group, March 11, 2020
Google has continued its efforts to acquire properties in downtown San Jose for its proposed transit-oriented development, Downtown West. Most recently, the company purchased a surface parking lot at 93 South Autumn Street for $5.3 million. The parcel is a short distance from the Diridon Transit Center, which provides access to Caltrain, Amtrak, the Capitol Corridor line, the ACE Train, light rail, and buses, and is a proposed site for a BART station and a high-speed rail stop. Plans for Downtown West call for office buildings, housing, hotels, shopping and entertainment centers, cultural attractions and open spaces. To date, Google has spent a total of $459M on land acquisition in support of its proposed transit village.

MI: Kalamazoo Voters Approve Tax to Fund Public Transportation
Kayla Miller, TNS, March 11, 2020
In Michigan, voters approved a five-year bond request to fund the Central County Transportation Authority. The new 0.9-mill levy is expected to cost owners of $100,000 homes approximately $45 a year until 2025. More than a third of Metro’s operating funds come from voter-approved millage, while the rest comes from fares and federal and state grants.

Toronto’s Affordability Crisis: How Residents Are Being Forced Out of the City They Love
Jamie Mauracher and Melanie Zettler, Global News, March 11, 2020
Housing affordability plagues Toronto residents, who are finding it difficult to purchase homes in Canada’s most populous city. According to LowestRates.ca, residents need to make more than Can$100K a year to buy a home in the city. Increasingly, younger workers are choosing to leave the city and move to neighboring communities such as Missisauga, Scarborough, and Guelph, where homes and rent seem more affordable. The city has supported initiatives like “Housing Now,” which is designed to keep rental rates affordable for middle-income households, but these efforts are limited and do not address the issue of homeownership.