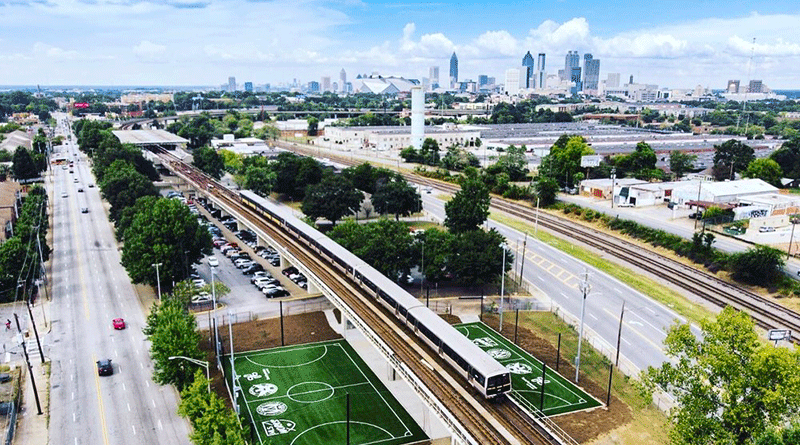 Congressional Delegation Tours Damaged Hudson River Train Tunnel
Brenda Flanagan, NJTV News, May 6, 2019
On Thursday, May 2, and Friday, May 3, a Congressional delegation of House Transportation Committee members toured the North River tunnels and held a roundtable discussion with leaders of the Gateway Project to discuss the need for federal funding and approval of the project. Many state leaders attended and testified about the need for Gateway funding, including Representative Tom Malinowski, Governor Phil Murphy, and members of the Raritan Valley Line Mayor’s Alliance. After the tour and roundtable, Committee Chairman Pete DeFazio reiterated his intent to push funding forward via the $2 trillion infrastructure bill proposed in Congress.

City Councilmembers Introduce Strong Affordable Housing Ordinance in Jersey City
New Jersey Press Releases, May 6, 2019
Two Jersey City councilmembers have introduced an ordinance to the City Council that would require 20 percent of units in new development to be set aside for families earning between $24,000 and $60,000 a year. The bill would apply to any property development that includes residential units, including those constructed on vacant land, redevelopment projects, or substantial rehabilitation projects. Affordable housing advocates have backed the proposed legislation, which is meant to counteract the gentrification trends seen in Jersey City over the past few years, which are partially driven by the city’s access to transit into Manhattan.

Despite Problems, ‘Incentives Have to Be a Tool in the Toolkit’
John Jordan, GlobeSt.com, May 7, 2019
Last week, during the NAIOP New Jersey’s “Next Generation Incentives: Building on Success” program, State Assemblywoman Eliana Pintor Marin proposed extending the expiration deadline for the Grow New Jersey and Economic Redevelopment and Growth programs past June 30. This would allow time for New Jersey leaders to agree on updated and replacement programs to encourage economic development in the state. Another panel during the NAIOP program discussed how the PILOT program has benefited municipalities because PILOTs are simple to negotiate and self-policing.

Ducktown Revitalization Plan Accepted by Atlantic City Planning Board
David Danzis, Press of Atlantic City, May 8, 2019
Atlantic City’s Planning Board has approved the Ducktown Neighborhood Revitalization Plan, authored by Rutala Associates LLC, as an amendment to the municipal Master Plan. The neighborhood-based plan incorporates the results of public meetings, community surveys, and data analysis, and lays the foundation for using financing opportunities such as the federal Opportunity Zones program to redevelop the area. According to Rutala Associates, the revitalization plan allows for parts of Ducktown to be eligible for NJ Transit Village designation around the Atlantic City Rail Terminal, which could open up additional financing opportunities.

‘We Have a Lot of People Guiding Us’: Summit Council Formally Approves Broad Street West Redevelopment Plan
Karen Ann Kurlander, TAPintoSummit, May 10, 2019
Summit Councilmembers unanimously approved the Broad Street Redevelopment Plan on May 7, albeit with many concerns raised by members of the public regarding building heights, parking garages, and mixed-use development. Councilmembers reassured the public that the plan approval is only the first step in the redevelopment process, which will require agreements with developers and much more public input. Summit has been a designated NJ Transit Village since 2013.

County, City Urge Hogan to Support Linking Maryland, Virginia Rail Systems
Ryan Marshall, The Frederick News-Post, May 5, 2019
With Amazon’s arrival in Arlington VA, officials in Frederick County, MD and the City of Frederick are appealing to Maryland Governor Larry Hogan to support creating one-seat-ride service for commuters traveling between residential and business areas of Maryland to Arlington County in Virginia by linking the MARC commuter rail system with the Virginia Railway Express (VRE). Currently commuters between the two areas have to transfer between lines or to Metrorail in downtown Washington D.C., primarily at Union Station. The letter to Governor Hogan comes prior to the start of a $100,000 market assessment and technical feasibility study funded by both the Maryland and Virginia DOTs.

CTA Celebrates Groundbreaking for New Damen Green Line Station
Kyra Senese, Railway, Track, and Structures, May 6, 2019
The Chicago Department of Transportation has broken ground on the $60 million Damen Station on the Green Line. The line will connect both workers and residents by servicing the Kinzie Industrial Corridor Tax Increment Financing district, as well as the Near West Side neighborhood and the United Center. Collages by a local Chicago artist will be included to depict the West Side neighborhood history and connect the station to the local community.

League of Stations: How a Nonprofit Uses Trains and Soccer to Reach Kids in Atlanta’s Urban Sprawl
Taylor Denman, Pro Soccer USA, May 8, 2019
Since 2014, an Atlanta nonprofit, Soccer in the Streets, has focused on building soccer pitches around MARTA stations to facilitate their mission of empowering Atlanta youth through soccer. The first pitch of the StationSoccer program replaced a vacant amphitheater on the roof of the Five Points station, a central hub of the city. This has led the way for two additional soccer pitches and community classrooms to teach kids financial literacy and introductory job skills. Sanjay Patel, the director of Soccer in the Streets, has worked with MARTA and the Georgia Transportation Alliance to identify six additional vacant parcels of land where fields can be built without impeding future TOD housing projects.

City Moves Forward on Streetcar Expansion Plans with The Hop for 2020 DNC and Beyond
Staff, Milwaukee Independent, May 8, 2019
The Mayor and Common Council of Milwaukee have announced plans for a 2.4-mile extension to the new streetcar system in anticipation of the 2020 Democratic National Convention. The first phase will cost $28 million and will connect directly to the city’s convention center. To facilitate further economic growth in the area, the remaining portions of the extension will connect the downtown to residential areas and districts containing small businesses.

‘We can’t lose the homeowners that we already have’: Communities Adapt Along the Red Line
Kellie Hwang, Indianapolis Star, May 9, 2019
In the months leading up to the IndyGo Red Line bus rapid transit system opening September 1, many initiatives are working to preserve and create affordable housing around the future corridor. The Indianapolis Neighborhood Housing Partnership has purchased several properties along the corridor with a new City equitable-TOD loan fund. The properties will be sold to developers to build mostly affordable, multi-family housing. Additionally, local housing action teams are spreading awareness about new development and rezonings to ensure existing homeowners are aware of impending changes and can voice their concerns at meetings with City officials and zoning hearings.

Transit-Friendly Locations Prioritized by Homebuyers Above Car-Friendliness: Poll
Joannah Connolly, Glacier Media Real Estate, May 7, 2019
A new survey published by the Mustel Group and Sotheby’s International Realty Canada shows that 30 percent of young-family homeowners in Metro Vancouver cite transit-friendliness as a top-three priority for deciding where to buy a home. The other top priorities for those polled include a safe, low-crime neighborhood; proximity to work, family, parks and open space; and distance to an elementary or secondary school. Top officials of the groups conducting the survey believe the report will allow metropolitan areas in Canada to conduct improvements to meet the “needs and priorities” of a new generation of homebuyers who want to live in urban areas.

Committee endorses plan to eliminate Edmonton’s minimum parking requirements
Jonny Wakefield, Edmonton Journal, May 7, 2019
The City Council of Edmonton in Alberta, Canada has voted to move forward on an “open parking” bill, which would completely eliminate minimum parking requirements for all new development. New homes and businesses would be able to “choose the amount of parking that meets their needs,” but some Councilpersons are concerned that if there is not sufficient parking available, excess cars will use street parking instead. City officials will now conduct a study to determine how to implement open parking policies without increasing the burden on street parking stalls—perhaps by providing better transit options.