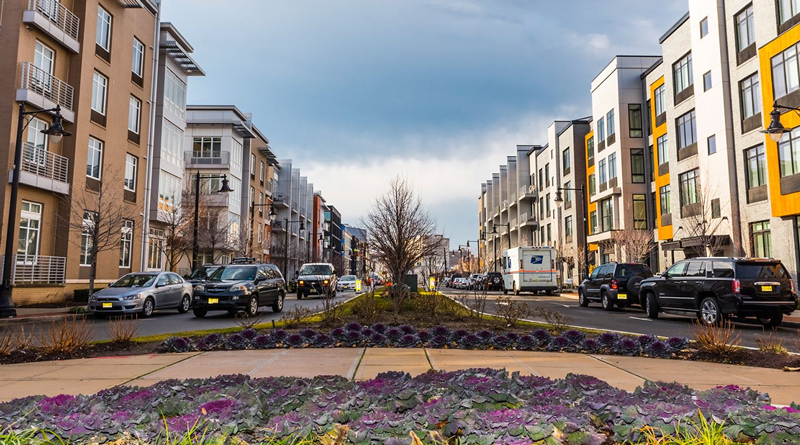 Photo courtesy of the Town of Harrison, NJ

NJ Towns Receive Federal Funding for Road Projects
Bob Makin, Bridgewater Courier News, October 25, 2019
The Federal Highway Administration has awarded the NJ Department of Transportation $100M, a portion of which will fund five road projects in central New Jersey. In Highland Park, the funds will support Safe Routes to School projects designed to improve safety and access to the Irving and Bartle schools. Work at these schools began in 2017 and this additional support may allow the projects to be completed six months ahead of schedule. The funds will also support: Bike Lambertville, a bicycling advocacy group creating bike routes and maintaining bike stations along Union Street; a bridge maintenance initiative in Sayreville; Manville Main Street improvement initiatives; and, pedestrian improvements to walkways that connect the NJ TRANSIT station to the riverfront in Raritan Borough. These five initiatives are among 28 in the state that will receive a portion of the grant.The Port of Bayonne, New Jersey in 2007.

Officials Break Ground on Phase Two of Harbor View Marketplace. Pedestrian Bridge, Ferry Service, Starbucks, Luxury Housing Set to Transform Long Derelict Site
Al Sullivan, Tapinto.net, October 27, 2019
On Thursday, phase two of the Harbor View Marketplace and ScenicVue construction project began in Bayonne. When complete, the mixed-use project will include 25,000 square feet of retail space and lifestyle amenities. The developer, JMF, will also build 650 residential units at the Peninsula at the Harbor, adjacent to the south portion of Harbor Station. These projects follow 20 years of development planning, and transportation infrastructure improvements in the area. Recently implemented ferry service to Manhattan and access to the Hudson Bergen Light Rail have attracted residential and commercial development, more of which is expected.

Rutherford, New Jersey: A Small Village with a Big Downtown
Keith Flamer, Forbes.com, October 29, 2019
Rutherford, NJ is known for its early- to mid-20th century charms and Victorian homes, but the wealthy suburban town is slowly modernizing to attract a more diverse population. As one of the New Jersey suburbs closest to New York City, Rutherford is welcoming new urban-inspired dwellings throughout the downtown area, where chic cafes and hobby shops line the streets. The town is easily navigable through walkable, bike-friendly streets. Flanked by major highways and the Passaic River, the borough is just a 30-minute train ride from Manhattan. As surrounding areas invite interest, Rutherford is catching up and updating its look with bricked sidewalks, family-friendly amenities, parks and nature trails, and multicultural community events.

North Brunswick Train Station Gets Major NJ Transit Approval
Carly Baldwin, Patch Staff, October 30, 2019
On Wednesday, NJ TRANSIT and Middlesex County announced that a new train station will be coming to the North Brunswick Transit Village near Route 1, along NJ TRANSIT’s Northeast Corridor line between Jersey Avenue and Princeton Junction. This long-awaited development is a big win for the residents of North Brunswick, East Brunswick, and South Brunswick, and will provide a commuting option to New York, Princeton, Old Bridge, Somerset County, and Manalapan and Marlboro in Monmouth County.  The Middlesex County Improvement Authority is named as the main agency responsible for the design and construction of the $50M development. Station design and engineering are expected to take about two years.

Harrison, N.J.: The Next Hoboken?
Jill P. Capuzzo, New York Times, October 31, 2019
Harrison, NJ is experiencing a renaissance as the result of a 22-year old plan to encourage more development of transit-oriented residential and commercial properties to replace the industrial land in the $256M PATH transit shed. Access to the World Trade Center in New York City via the PATH train takes 20 minutes, and commuters traveling to Midtown Manhattan need only switch to the Journal Square-33rd Street line. Single-family housing is not common in Harrison, as the city focuses on implementing multifamily zoning. Monthly rents range from $1,375 for studios to $4,700 for two-bedroom units in the newer buildings.

Harlem African Burial Ground Project Begins: City Accepting Bids
Brendan Krisel, Patch Staff, October 21, 2019
The New York City Economic Development Corporation (NYEDC) is converting a former bus depot into a memorial site and mixed commercial and residential space, after uncovering a forgotten African burial ground during a 2017 excavation in Harlem. The site of the 17th century burial ground will be preserved exclusively for the memorial, but the remainder of the block will accommodate mixed-use development with more than 650,000 square feet of residential space and 345,000 square feet of commercial and community space. The NYEDC announced in March that 80 percent of the apartments will be rent-restricted and offered at 30 percent of the Area Median Income of the region, to ensure that the units will be affordable for a family of three earning an annual income of $24,500. The City Council will begin its search for development partners later this year.

Bus Yard Housing Plans Call for More Than 500 Units, 50 Percent Affordable
Joe Fitzgerald Rodriguez, SF Examiner, October 26, 2019
Muni, San Francisco’s transit agency, is building 525 new housing units over the Potrero Bus Yard as part of its $400M modernization plan. The bus yard at 17th and Bryant Streets currently holds trolleybuses that serve 100,000 daily riders. The agency plans for 50 percent of these units to be affordable, a high bar in a city where 40 percent affordability is considered ambitious. To achieve this goal, the development may require a subsidy, according to SFMTA officials. The area is also likely to feature a mall supporting small businesses and local vendors. The SFMTA is set to decide on a developer by the end of 2020 and begin construction by 2023.

Red Line ridership numbers for September are in. Here’s how many are riding.
Kellie Hwang, Indianapolis Star, October 28, 2019
IndyGo reported more than 230,000 boardings in September on the new Red Line rapid transit bus service. Launched on September 1, the line has been fare-free during an initial period. Nearly 7,700 riders have used the line per day. Starting November 11, IndyGo will charge riders $1.75 per ride and $4 for an all-day pass. The Red Line is a part of a new network of rapid bus services, called the Marion County Transit Plan. A 0.25 percent tax increase implemented in 2016 will fund improvements that include increased bus frequencies, extended operation hours, dedicated lanes and raised-platform stations. The IndyGo Red Line runs 13.1 miles from Broad Ripple to the University of Indianapolis, with headways of 10 to 20 minutes at each station.

Met Council Gets Behind a Faster Ride for St. Paul Commuters
Dylan Thomas, Minneapolis / St. Paul Business Journal, October 28, 2019
The Minneapolis Metropolitan Council intends to extend the planned B Line rapid transit bus service from uptown Minneapolis to downtown St. Paul. The B Line will replace the local Route 21 bus, running 13 miles along one of Metro Transit’s busiest routes. The B Line will provide faster and more frequent service to about 10,000 each weekday, with 33 stations served every 10 minutes. Original plans called for the line to end at Snelling Avenue, with a projected cost of about $54M to build and operate. The extension to downtown St Paul will require a new cost estimate and additional funding. The new corridor plan will be released this winter, with construction targeted to start in 2022.

Some suburban workers face long, tricky commutes. Communities are grappling with how to fill in transit holes
Mary Wisniewski, Chicago Tribune, Oct 28, 2019
The Chicago Metropolitan Planning Council recently allocated nearly $500,000 for research into last-mile transit solutions—transportation that connects riders between transit stops and destinations such as home or work. Nearly 3 million of the region’s jobs are located outside of the city’s downtown district, and an estimated 400,000 workers struggle with long, complicated commutes to jobs in the suburbs with some traveling up to four hours roundtrip via eight different buses. Blue collars workers, who work off-hour shifts, suffer the most from these transit deficits as they travel when services come less frequently, if at all, and often cannot afford private vehicles. The Metro Planning Council seeks information on short-term solutions such as shuttle buses, bikes and scooters, sidewalk improvements, and ride-share vehicles to serve the population of workers coming into the suburbs as well as longer-term solutions such as increasing employment opportunities near transit.

INDONESIA — Asian Public Transport System Hailed a Potential “Model” for Tackling Urban Congestion.
Martin Banks, EU Today, October 23, 2019
At the three-day International Bus Conference in Brussels Expo, Jakarta Public Transportation announced plans to develop an integrated, multi-modal, environment-friendly transportation system. The Microtrans initiative is an integrated BRT multi-modal system that will connect Transjakarta (the current bus rapid system), the MRT, and the much-awaited LRT system. The BRT is also set to replace its current fleet with more advanced electric buses in 2023, to improve mobility and reduce gas emissions. The success of the Transjakarta BRT in 2004 is a source of pride for Indonesians. Transjakarta BRT serves 25 stations with 250 km in routes, providing trips to 20 million passengers in Jakarta and neighboring cities.

CHILE — Why Chile’s Massive Protests Started With a Subway Fare Hike
Juan Pablo Garnham and Nicolás Alonso, CityLab.com, October 26, 2019
In what is considered the largest demonstration in the country’s history, 1.2 million Chileans gathered in Santiago’s Plaza Italia on Friday to protest the 3.75 percent fare increase on public transit systems. The 30 Chilean peso fare increase—less than five U.S. cents—would strain many of the low-income families that depend on public transportation. The subway serves many of the city’s mobility needs, and ridership spans socioeconomic classes. Several days of public protests that demanded policy reforms in multiple areas, including transportation, health, education, and social security, followed the announcement of the increase. The Chilean government initially did not respond to the demands. On Friday, as tensions escalated, 19 subway stations were burned, damaging two lines that catered to the most populated parts of the city. President Pinera has since backtracked on the fare hikes. Repairs on Line 1 are expected to take up to a year to complete, increasing commute time and exacerbating stress and overcrowding for riders.

AUSTRIA — Secrets of the World’s Most Livable City
David Dudley, Citylab.com, October 29, 2019
Vienna, Austria is consistently ranked as the world’s most livable city. The city of 2 million people is growing rapidly and adds approximately 13,000 new housing units a year, yet it is not plagued by problems of unaffordable housing or urban sprawl. Mayor Maria Vassilakou and her city council proudly subsidize social housing for 62 percent of the population, including a significant portion of the middle class. A focus on children and family needs are at the core of the Viennese philosophy towards affordable public housing. The city is also committed to preserving green spaces, and moving towards pedestrianization and away from automobile-dependency. Residents enjoy access to a comprehensive network of public transit systems for a flat rate of €365 annually, only €1 a day. Government-funded buses, trams, and subways cover more than 73 percent of Vienna’s mobility needs.

September 20, 2009 Steph_Admin Comments Off on New Montclair TOD in the Home Stretch