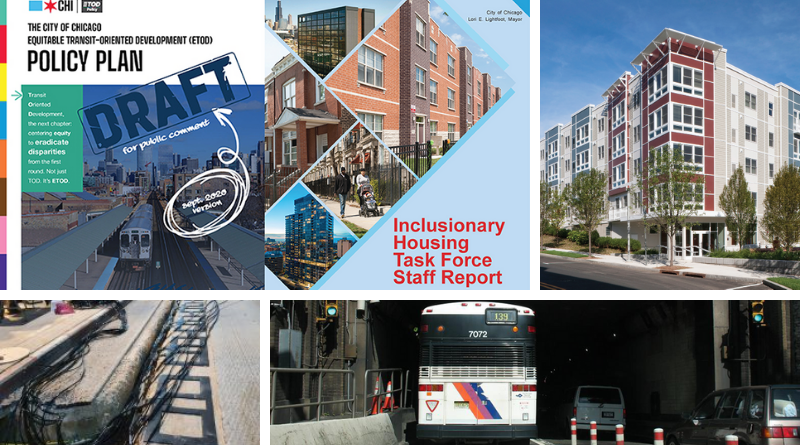 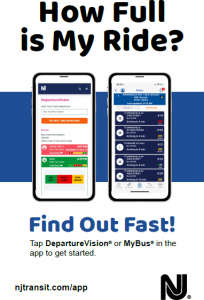 NEW JERSEY—Color Coded Icons On Mobile App Indicate Light, Medium and Heavy Ridership Conditions On Buses and Trains
NJ TRANSIT, Press Release, September 14, 2020
NJ TRANSIT has launched new features on its mobile app that allows riders to see how full their train or bus is before they step on board. The app uses green, yellow and red color-coded icons to indicate light, medium, or heavy ridership conditions. On buses, the data are collected by automated onboard passenger counting technology. On trains on the Raritan Valley, Atlantic City and Morris & Essex Lines, train crews collect data automatically using the agency’s new handheld devices when scanning and validating tickets and passes. For other rail lines, riders will be able to crowdsource information by voluntarily inputting these data to alert fellow riders how full the train is.

NEW YORK-NEW JERSEY—Bus Lane Returns To Lincoln Tunnel For First Time Since COVID-19
Dan Alexander, New Jersey 101.5, September 21, 2020
As COVID-19-related restrictions have eased, travel via public transportation and personal vehicles have been increasing. The Port Authority of New York and New Jersey recently reopened its exclusive bus lanes at Lincoln Tunnel to ease traffic at the Hudson River crossing. The Port Authority reports that traffic has steadily increased since the loosening of the restrictions and that in July was just 15 percent lower than a year ago.

NORTH CAROLINA—Winston-Salem Transit Authority ridership plummeted because of COVID. Expected to pick up now that regular service has resumed
Wesley Young, Winston-Salem Journal, September 25, 2020
Like other transit agencies worldwide, ridership on buses operated by the Winston-Salem Transit Authority (WSTA) plummeted with the outbreak of the coronavirus. But like other transit agencies, WSTA is starting to see riders return upon the resumption of regular bus service. Ridership limits remain in place, as does the practice of using the rear doors to enter buses. The bus service remains fare-free at this time. WSTA has received federal support for personal protection, lost revenue, and additional cleaning services, as well as for the purchase of eight new hybrid buses. 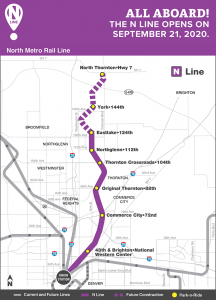 COLORADO—Opening of N-Line to Denver’s North Suburbs a Rare “Bright Spot” for COVID-Battered Transit Sector
John Aguilar, The Denver Post, September 18, 2020
Since the 2004 passage of FasTracks, a multibillion-dollar public transportation expansion plan, the Regional Transportation District (RTD) has built 25.1 miles of light rail track and 53 miles of commuter rail track, started a bus rapid transit service, and opened an intermodal hub at Denver’s Union Station. Initial planning for the N-Line, a 13-mile commuter rail line connecting Union Station to the city’s northern suburbs, started in 2006. The line is now complete, but its launch comes at a time when the pandemic has depressed ridership by as much as 64.4 percent – contributing to a $215 million budget shortfall for the agency in the coming year and the possible elimination of more than 500 jobs.

Dunellen: Three-Story Apartment Building Proposed for Downtown
Mike Deak, Bridgewater Courier News, September 22, 2020
The Dunellen Borough Planning Board will hold a special meeting on September 29 to review the application to build a three-story structure at the corner of North Avenue (Rt. 28) and Jackson Avenue, less than a quarter-mile from the Dunellen Station and within the Borough’s Downtown Redevelopment Area. Communipaw Associates, LLC, based in Union, has proposed the demolition of the current structure, formerly used as an auto repair shop, and the construction of a mixed-use building comprising 14 housing units and ground floor retail and parking. Plans call for a total of 19 parking spaces. The quarter-acre site is exempt from providing on-site parking, as stipulated by the Borough’s redevelopment plan. The NJ Department of Transportation designated Dunellen as a NJ Transit Village in 2012. 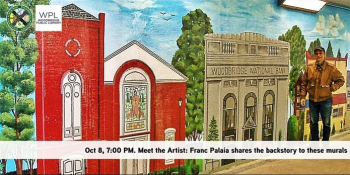 Meet the Artist: Franc Palaia
WPLNJ, Patch-Woodbridge, September 21, 2020
Maybe you have had the good fortune to spy the three, 20-foot etched glass windscreens and mural at the Woodbridge Station. Those creations are the work of Franc Palaia, and they reside in the tunnel underpass at the station. On October 8th at 7pm, Mr. Palaia will discuss his work – including how he got the inspiration and how he pitched the idea to NJ TRANSIT – during a virtual meet-the-artist event. Registration is required.

NEW YORK—MTA Seeks Proposals to Transform Parking Lot into Revenue Generator for Agency, Westbury
Dandan Zou, Newsday, September 21, 2020
As part of its effort to generate revenue from non-fare sources, the Metropolitan Transportation Authority is looking to convert a commuter parking lot near the Westbury Station into apartments. The 1.6-acre property is owned by the LIRR. The lot currently provides 311 parking spaces for commuters, but will be made redundant when a new 683-space garage located north of the station is completed next year. The station will also receive an upgrade as part of the Third Track project, which will extend the third track 10 miles on the LIRR’s Main Line between Floral Park and Hicksville. That work is expected to be completed by the spring of 2022. The RFP stipulates a building height limit of three stories or 40 feet, but also notes the possibility of zoning bonuses to five stories or 65 feet. 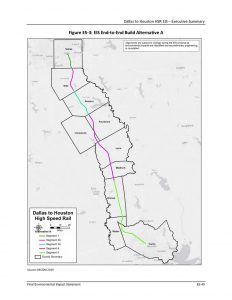 TEXAS—Texas HSR Gets Federal Greenlight, But Is It Shovel-Ready?
Sandy Smith, Next City, September 23, 2020
The Texas Central Road may be the first organization to complete a true high-speed rail line in the U.S. now that it has received favorable decisions on the Rule of Particular Applicability (RPA) and a Record of Decision (ROD). The RPA sets up the regulatory and safety framework for the rail line, while the ROD approves environmental review and alternatives analysis. If completed, the alignment will connect Dallas-Houston, run nine Texas counties, and include a stop near College Station, the location of Texas A&M University. TCR plans to employ the bullet-train system used by Japan Railway Central, which has operated for 55 years without a single accident or fatality. Financing for the project remains an issue for implementation, as are rising costs and local opposition. 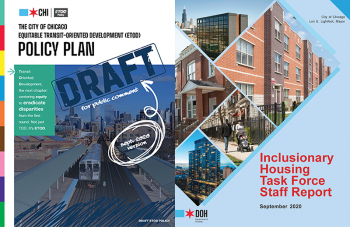 ILLINOIS—‘The E Stands for Equity’: How 2 New City Plans Seek to Tackle Racial and Economic Segregation
Natalie Moore, WBEZ/National Public Radio, September 19, 2020
A history of entrenched racial and economic segregation in, but not unique to, Chicago has contributed to two new city documents that intentionally link public transportation and housing, and which seek to reverse decades of disinvestment in the city’s Black and Latino communities. The ETOD Policy Plan and the Inclusionary Housing Task Force Staff Report each, and together, seek redress for the pattern of transit-oriented development that has arisen since the Chicago adopted its TOD ordinance in 2013. Areas near rail stations have been eligible for TOD benefits but have not seen TOD activity have 40 percent more residents of color and 23 percent more low-income residents. The plan calls for any TOD project to be examined for racial impact, while the report examined the city’s Affordable Requirements Ordinance (ARO). The report found a deficit in investment in as about half of developers receiving financial assistance, or that involve city-owned land, took advantage of a provision to pay a fee in lieu of building affordable housing units.

ISRAEL—Tel Aviv-Yafo Municipality, in Partnership with ElectReon and Dan Bus Company, Launches Electric Road Pilot
New Tech Magazine (Europe), September 21, 2020
In the City of Tel Aviv, work has begun on a pilot program to create wireless electric roads to charge and power public transportation vehicles. The Tel Aviv-Yafo Municipality has partnered with ElectReon and the Dan Bus Company. The pilot roadway will connect Tel Aviv University Railway Station and Klatzkin Terminal in Ramat Aviv, a route of 2 km (1.2 miles). The electric road itself will be a 600 m (.37-mile) section of the route, and can be utilized by specially-equipped buses.