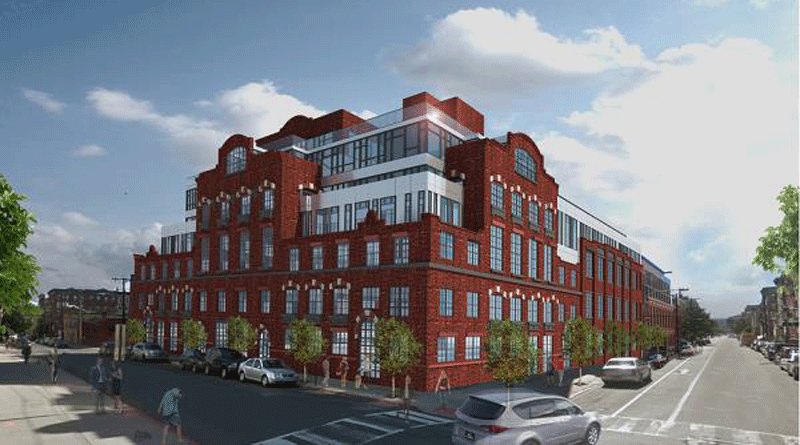 New and Newsworthy from September 2018

Commuters need coffee, so Starbucks is opening at one of N.J.’s busiest stations
By Karen Yi, NJ.com, September 6, 2018
Starbucks was approved for a 10-year lease inside the Newark train station and will pay $1.7 million for the space over 10 years. The company plans to spend $750,000 on improvements to the space. The area around the station may see significant development after the Mayor signed a controversial proposal last year to allow buildings near Penn Station to reach 12 stories.

Downtown Jersey City Development ‘The Enclave’ Will Include Over 250 Units
By Jared Kofsky, Jersey Digs, September 7, 2018
The building will be six stories tall and include 260 rentals, and 3,122 square feet of retail space. A second part of the project, Van Leer Place North, will consist of 222 apartments. The neighborhood, which some developers have started calling Soho West, is among the fastest growing in Jersey City despite being several blocks from the nearest train or bus station.

Bloustein Report Busts the Millennial Migration Myth
By NJPP Staff, New Jersey Policy Perspective, September 10, 2018
A new study by New Jersey Policy Perspective found that residents aged 18 to 39 are leaving the state but at no greater rate than at any time in the last 14 years. The report also found that NJ millennials are continuing to have a tough time finding affordable housing and good-paying jobs. 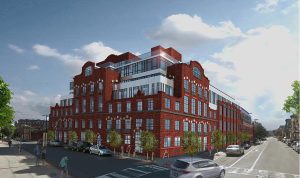 Somerville will get $18.5M from two new apartment projects
By Mike Deak, Bridgewater Courier News, September 18, 2018
The borough council has approved PILOT programs for two approved projects to be developed on Veterans Memorial Drive and Haynes Street. One PILOT will be 117 units, a block from the train station. The second PILOT will have 179 apartments. 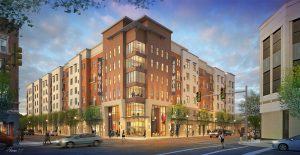 NJ Development Gets $52M
By Keith Loria, Multi-Housing News, September 18, 2018
Waypoint Residential has received nearly $52 million in construction financing to redevelop 435 Main Street in Hackensack. The firm plans a four-story structure with 235 apartments above two stories of parking. Lenders cited location as a significant factor in their decision to fund the project, which is within walking distance of the Anderson Street NJ TRANSIT station and numerous parks, restaurants, bars and retail. 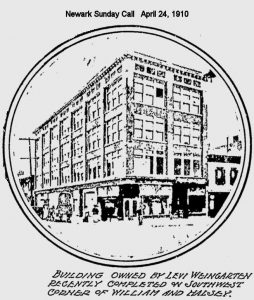 128-Year-Old Newark Building Could be Expanded Into 25-Unit Development
By Jared Kofsky, Jersey Digs, September 25, 2018
Halsey Williams Partners, LCC bought the building two years ago for $1.25 million and is planning to expand this four-story building into a six-story development. The company seeks to create 25 residential units on the upper floors, keep retail space on the ground floor, and possibly include a restaurant complex. The building sits next to the Teachers Village.

Lackawanna Shared-Parking Plan Calls for 360 Spots Less Than Required
By Jaimie Julia Winters, Montclair Local News, September 25, 2018
Developers proposed 457 spaces, rather than the 857 required spots, to the Montclair Planning Board as part of  a shared parking plan at their property, located near the Bay Street Station, a designated NJ Transit Village area. The planning board heard comments from skeptics of the plan as well.

Bordentown’s Charles Latini is leading a new age of planning
By Kellie C. Murphy, CommunityNews.org, September 26, 2018
Charles Latini, president of the N.J. Chapter of the American Planning Association (NJAPA), shares his story about how he became a planner and ongoing projects he is excited about. As the leader of the APA chapter, he must deal with politics and bureaucracy while juggling many relationships and personalities. The NJAPA board responds to different pieces of legislation that relate to planning.
Disclosure: Charles Latini also serves on the NJTOD.org Newsletter Board. 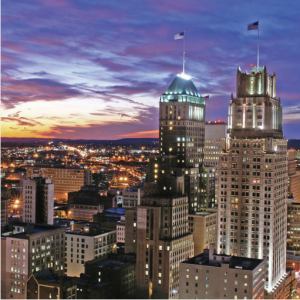 How Newark is Becoming a Tech Pioneer
By Industry Insights, CommercialObserver.com, September 25, 2018
Newark currently has over $4 billion in development underway, which underscores its status as a premiere transit hub and a city on the rise. The city’s crime rate is at its lowest since the 1960s and the statewide Grow New Jersey program has been offering tax incentives that create jobs to companies that operate near transit hubs. Newark is one of the 20 U.S. cities designated as a finalist to host the second headquarters of Amazon.

Houston May Eliminate Some Mandatory Parking
By Angie Schmitt, Streets Blog, September 7, 2018
The Houston Planning Commission considers a proposal to exempt two neighborhoods adjacent to downtown and strong transit access from off-street parking requirements. The parking reforms come from the “Walkable Places Committee,” a new group focused on urbanism in the city.

WMATA to seek developers to build around Huntington Metro Station.
By Jon Banister, Bisnow Washington DC, September 11, 2018
Huntington Metro Station, the last stop on the Yellow Line, could soon be the site of a major mixed-use development. WMATA plans to propose zoning changes prior to Fairfax County’s comprehensive plan amendment process, expected to begin late next year. The 12.4-acre site would need to be rezoned to allow for the proposed development. This project is the latest in a series of projects that WMATA has launched on parking lots and other vacant land around Metro stations. 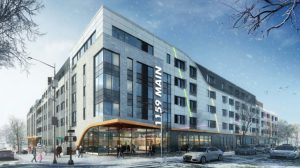 Big Reveal: 1159 Main
By Buffalo Rising, September 13, 2018
A five-story, mixed-use 215-unit apartment building is now proposed for the site located near the Summer-Best light rail station. It is located on a former Buffalo Travel Lodge. Previously proposed uses for the site included a new hotel and a four-story office building. 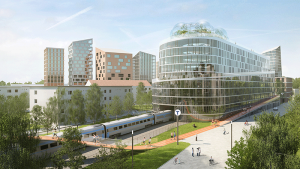 Stockholm Loop – Solving the Swedish Housing Crisis Through Transit-oriented Development and Sports
By PR Newswire, September 17, 2018
Belatchew Labs plans to build new urban development areas around twelve existing stations. One way to give these outlying areas a common identity could be the establishment of an annual sporting event.

BART to build 519 new homes at Lake Merritt
By Adam Brinklow, Curbed SF, Sep 18, 2018
The BART (Bay Area Rapid Transit) Board of Directors has advanced a long-standing proposal to develop hundreds of new homes near the Lake Merritt BART station. The process authorizes negotiations with potential developers, a process that could take up to two years.

Most L.A. New Development Starts Near Transit
By Kelsi Maree Borland, GlobeSt.com, September 18, 2018
The majority of the new construction pipeline is now congregated near transit lines and stations, as developers have been incentivized to build within a half mile of a transit stop. These incentives are due to Measure JJJ and have included reduced parking requirements, more units and greater height allowances.

WMATA to seek developer for mixed-use project at Huntington
By Katie Arcieri, Washington Business Journal, September 19, 2018
The Washington DC agency plans to issue a joint development solicitation for the Huntington Metro station campus by this winter and select a contractor next spring. The size of the project is unknown at this time. WMATA tried to find a taker for Huntington four years ago for a 1.15 acre parcel, but got no responses.

Transit Oriented Development and other projects
By Tacoma Daily Index Staff, September 18, 2018
New housing is coming to the Dome District in Tacoma, Washington. One new mixed-use development will consist of 152 micro units and have no parking, due to its proximity to multiple transportation amenities. 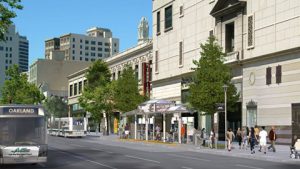 Can Transit Improvements Lead to Gentrification?
By Scott Morris, East Bay Express, September 19, 2018
While TOD has been a key tactic to combat the region’s housing crisis, residents are still worried about displacement. In the Bay Area, transit development has been more likely to lead to gentrification in core urban areas like Oakland and San Francisco, but not in more peripheral locations like Concord or Antioch, according to Karen Chapple, Professor of City and Regional Planning at UC Berkeley. 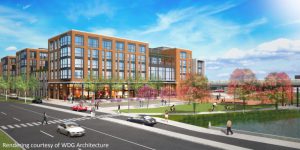 Adapt Or Die: The Ways Landlords Are Bending Over Backward To Deal With A Shifting Retail World
By Miriam Hall, Bisnow New York, September 20, 2018
Retailers and landlords, facing the shift from bricks-and-mortar trade to online commerce, search for creative uses for spaces and increasingly experiment with creative concepts to fill stores and lure shoppers. 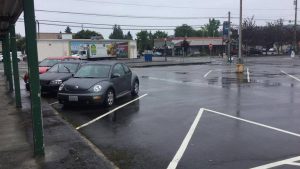 Reduced parking for new developments a ‘common approach’ for cities pushing transit, like Sumner
By Allison Needles, News Tribune, September 21, 2018
The Sumner (WA) City Council voted 7-0 to reduce the minimum amount of required parking for future developments. The city has a long-term plan to provide more housing opportunities for millennials and seniors, and anticipates that they will drive less.

Nashville Receives $9 Million Transit Grant
By Meg Garner, Nashville Business Journal, September 25, 2018
Nashville is one of 107 cities receiving a grant from the FTA’s bus-improvement program. The news is a win for the city’s transit system after a year of setbacks, including voters rejecting Metro’s plan for a $5.4 billion transit overhaul, and a rejection of plans for Nashville’s first transit-oriented development district.

Historic Stony Brook envisions big changes
By Michael Gavin, News Day, September 26, 2018
A revisioning plan was recently developed by a citizen’s advisory committee to determine future development while preserving Stony Brook, New York’s historic nature. The plan includes development around the train station, a shuttle to increase viability of a commercial corridor, and a sewer line to enable the addition of restaurants and mixed-use storefronts and apartments.