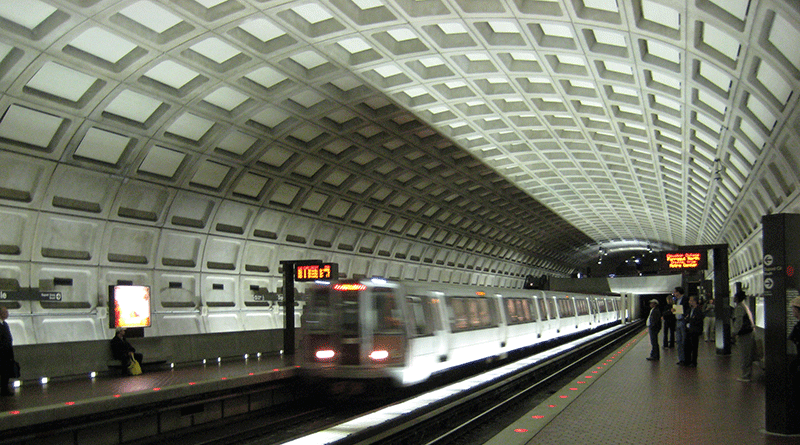 Dupont Circle, WMATA Station, by user Jtesla16 at wts is licensed by CC-BY-4.0

Since the start of Metrorail service in 1976, the Washington region has been a national leader in planning and implementing transit-oriented development. Spurred by the aggressive pursuit of joint-development by the Washington Metropolitan Area Transit Authority (WMATA) as well as the plans of individual counties and municipalities, the fast-growing region encompassing the District of Columbia, Maryland and northern Virginia has tapped into Metro’s potential to shape land use patterns.

As 2006 unfolds, a variety of planning and development efforts in Metro’s service area reflect the opportunities and challenges faced by other regions seeking to implement TOD. Redevelopment in urban and mature suburban communities, public resistance to proposed density increases, transformation of “edge cities” and fiscal challenges facing transit operation and expansion are all significant issues confronting the region today.

At the region’s heart, the District of Columbia has witnessed a spurt of TOD in the past few years, with mixed-use projects transforming many areas near downtown subway stations. Once derelict streetscapes are now characterized by attractive low-rise structures featuring retail, office, and, increasingly, residential components. But similar projects have been rare in neighborhoods beyond downtown, especially in distressed parts of the city.

A major focus of current redevelopment activity is Metro’s New York Avenue station, opened in late 2004 as the transit system’s first “infill” station. Located near acres of vacant and underutilized properties in the NoMA (North of Massachusetts Avenue) neighborhood, the station will soon be joined by a new headquarters for the Bureau of Alcohol, Tobacco, Firearms and Explosives (ATF). When finished this summer, the new ATF headquarters will bring 1,000+ employees to the station area. Plans are also in the works to develop housing, retail and office space on the nearby Wholesale Market site. A comprehensive development strategy for the NoMA neighborhood, to be completed soon, will aim at turning New York Avenue into a major gateway to downtown, emphasizing its transit connections and mixed land uses.

In Maryland, suburban Montgomery County has successfully implemented TOD at Metro stops in the traditional centers of Bethesda and Silver Springs, and is developing a vision for future growth that will acknowledge the county’s dwindling supply of vacant land. In a January 2006 draft report, the Maryland-National Capital Park and Planning Commission recommended a planning framework for Montgomery County that focuses, in part, on transforming a number of auto-dependent commercial districts into mixed-use, transit-connected centers and corridors. With no room to grow, the county envisions areas now dominated by parking lots and arterials as future neighborhoods and pedestrian-friendly boulevards.

South of the Potomac in Arlington County, Virginia, the Rosslyn-Ballston corridor stands as one of the nation’s premier TOD corridors. An October 2005 update to the Clarendon Station area plan will help guide the redevelopment of an aging commercial district into an urban village. The plan calls for medium-density residential development near the station, improvements to public spaces and streetscapes, and incentives to preserve older buildings.

Beyond the Beltway, Fairfax County still has large swaths of vacant land — unlike Montgomery and Arlington counties — and is growing rapidly. Officials in Fairfax are making efforts to conserve open space and alleviate traffic congestion by promoting development near Metro stations. At the Vienna station, a developer is proposing a 60-acre TOD where 2,250 condos would join retail and office space in 13 new towers. Known as MetroWest, the development has drawn criticism from some residents in surrounding low-density subdivisions who fear that the large scale of the development will overload area roads and overcrowd Metro’s Orange line. A crucial land sale from the transit agency to the developer was approved in late 2005; county officials will soon determine the project’s fate when they vote on the developer’s rezoning application.

Opportunities for TOD in Fairfax County will multiply if the long-anticipated extension of Metrorail to Dulles Airport goes ahead as planned. The two-phase $4 billion project, which is scheduled to begin construction later this year and for which funding is largely in place, will include four stations in Tysons Corner, the D.C. region’s famous “edge city.” County officials and a number of Smart Growth organizations in the region are envisioning Tysons Corner transforming from today’s high-density, but auto-oriented employment and shopping hub, into a pedestrian-friendly urban center. The Fairfax County Planning Commission is currently working on the Tysons Corner Transportation/Urban Design Study to outline policy and investment options for realizing TOD in that location.