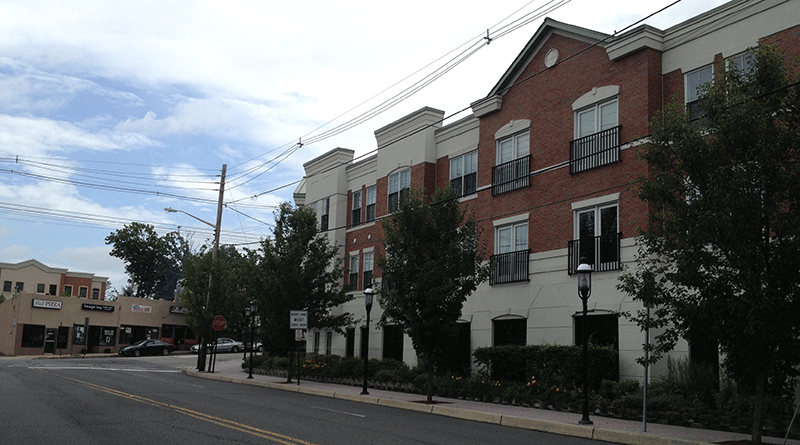 In July 2015 the New Jersey Department of Transportation designated the Borough of Park Ridge and the Township of Irvington as the state’s 29th and 30th Transit Villages.

Located in Bergen County, the Borough of Park Ridge is home to more than 8,800 residents and is the site of the Park Ridge Station on the Pascack Valley Line. The station is situated at Park Avenue and Broadway, within the Borough’s Town Center. About 176 riders board at the station each day where they can make the trip to Hoboken in less than an hour, or transfer at Secaucus for travel to New York Penn Station or to other locations in New Jersey. Fifteen trains a day take passengers from Park Ridge Station to Hoboken. NJ TRANSIT initiated midday and weekend rail service to Park Ridge in 2009. Commuters can also travel to NY Port Authority Bus Terminal aboard one of 16 Rockland Coach buses each day or to the George Washington Bridge Terminal aboard one of seven daily buses operated by Saddle River Tours.

In order to establish the community’s goals and objectives for the future of the Borough, Park Ridge residents and business owners participated in a community visioning effort led by the Regional Plan Association in 2008. That exercise identified the station and the presence of downtown housing as assets to be cultivated while citing a need to improve pedestrian connections to advance the health of the Park Ridge commercial center. Park Ridge has undertaken an effort to promote pedestrian and bicycle connections within the community and linkages between its neighborhoods and its downtown. Since 2009, this effort has included improvements to a system of trails that connect neighborhoods with the downtown and each other. Projects are supported with county funds and a locally levied open space tax fund. To date, five such projects have been completed. Currently under construction is a path connecting a neighborhood in the northern part of the Borough (bordering Montvale) to the Mill Pond, Park Ridge Borough Hall and the ball field at Park Ridge High School. The path will continue southward to the neighboring community of Woodcliff Lake and to the Woodcliff Lake rail station.

The 2008 visioning exercise led to other planning efforts, all in service of promoting TOD. The 2009 Master Plan emphasized the potential for a pedestrian shopping district at the Borough’s center. In 2010, a neighborhood business district was added to Park Ridge’s zoning code. The purpose of the new code is to encourage property redevelopment and promote a “more pedestrian-oriented commercial district”.

Neighborhood Business Zone District
The purpose and intent of the Neighborhood Business Zone District is to encourage the redevelopment of the properties included in the district in a manner which is consistent with, and in furtherance of, the 2009 Borough of Park Ridge Comprehensive Master Plan. The intent of the district is to encourage a more pedestrian-oriented commercial district through the incorporation of enhanced building facades, increased landscaping and street furniture, and improved off-street parking configurations, including shared parking arrangements and reduced curb cuts along rights-of-way. Furthermore, it is the purpose and intent of this district to allow for mixed-use development which incorporates a variety of retail and service commercial uses as well as office uses at ground level, with office and residential uses above the ground floor. http://ecode360.com/14521254

As a result of the new zoning regulations, downtown housing options have expanded over recent years. Across from the Park Ridge Station is Station Place at Park Ridge (90 Park Avenue). The project, the first to follow changes to the Master Plan and zoning, was completed in Fall 2007 and features 1- and 2-bedroom apartments. A block away and on the other side of the station is the Effron Building (aka Park Ridge Town Center) at 70-72 Park Avenue. The two-story redevelopment was built following a 2010 fire that destroyed the landmark building housing the Krell Lighting warehouse and showroom. The new structure, completed in 2013, took advantage of the town’s new mixed-use zoning ordinance and features apartments (including a deed-restricted affordable unit) above commercial space. Valley Medical Group is a tenant.

Park Ridge’s role as an employment site is in flux. In 2013, major employer, Hertz, announced its plans to move operations to Florida. At that time, the company employed more than 650 individuals at the Park Ridge headquarters. As of fall 2014, Hertz was planning to retain about 150 employees in NJ and was seeking a tenant for its former headquarters. In fall 2014, another local employer, the Sony Corporation of America, announced that it was seeking a buyer for its building in Park Ridge. This building and office campus were recently sold. While both companies currently remain Park Ridge employers, these announcements spurred Park Ridge to redouble its efforts to enhance its downtown and pursue rehabilitation as a way to maintain its tax base.

Interest in Park Ridge’s downtown is growing. According to Brigette Bogart, planning consultant for Park Ridge, a private property owner in the downtown area recently submitted an application requesting rezoning of some lots adjacent to the train station. The Borough Planning Board is reviewing and analyzing the request in relation to the Borough’s goals for redevelopment and maintenance of its tax base. Through its work sessions, the Planning Board has determined that rezoning may be necessary in order to accomplish some of these goals. It is currently reviewing planning studies to determine the most appropriate zoning regulations to assist in promoting downtown development while respecting the character of the Borough.