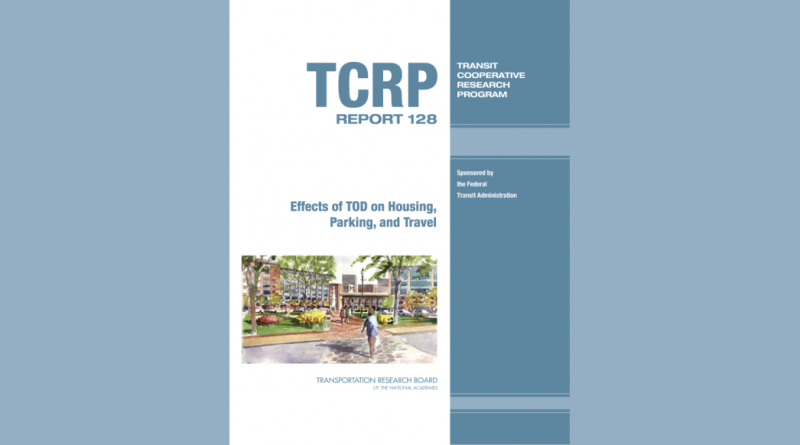 TCRP Report 128: Effects of TOD on Housing, Parking, and Travel (2008)
By G. B. Arrington, PB PlaceMaking, Portland, OR, and Robert Cervero, University of California at Berkeley, Berkeley, CA, The Transit Cooperative Research Program of the Transportation Research Board, Washington, D.C.

This new report attempts to clarify the relationship between livable communities and transit, building on the 2004 TCRP Report 102, Transit-Oriented Development in the United States: Experiences, Challenges, and Prospects. Researchers looked at travel patterns in 17 TOD developments situated in four metropolitan areas (Philadelphia/northeast New Jersey, Portland, Oregon; metropolitan Washington, D.C., and San Francisco’s East Bay Area) including the Gaslight Commons project in South Orange, NJ. As expected, investigators found that housing development in these locations produced considerably less traffic than is generated by conventional development. Such evidence is useful to counter standard practices regarding parking requirements and traffic impact assessments which often fail to take into account this fundamental difference. Furthermore, the assumption that TOD has essentially the same impacts as conventional development can hinder the potential affordability and/or profitability of these projects by requiring more parking than may be needed. Researches cite the need for further study into parking generation to determine whether residents of communities well served by transit own cars at the same rate as residents in the surrounding area, but simply use them less. Also, because this research focused on only residential uses, additional research will be necessary to determine the impacts of mixed-use development on parking and travel behavior. While limited in this way, public officials, planners, and land developers interested in the impacts of TOD and how to improve the performance of transit-friendly development should find this study useful.