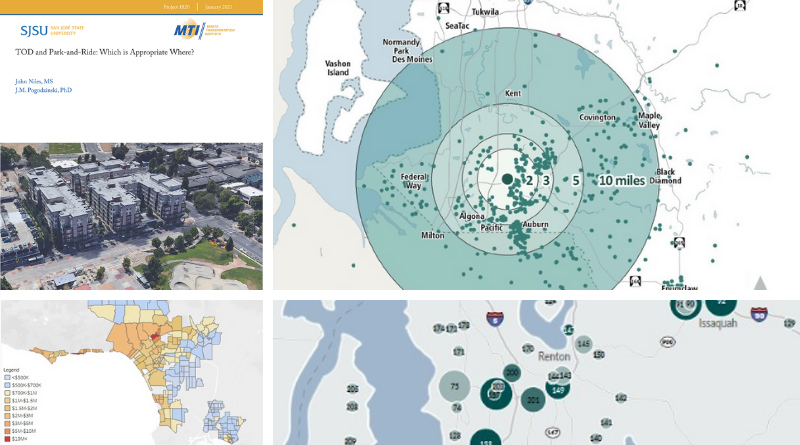 TOD and Park-and-Ride: Which is Appropriate Where?
John Niles, MS, and J.M. Pogodzinksi, PhD 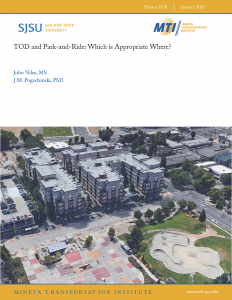 A new report by researchers at the Mineta Institute critically compares the effects of Park-and-Ride (PnR) and Transit-Oriented Development (TOD) on transit ridership. Using econometric analysis of GIS data for transit stops, PnR locations, and residential density, and drawing data from Seattle, Los Angeles, and San José, they found that PnR capacity near transit stations was two-to-four times more important to ridership than on-site housing units.

If one were only interested in growing ridership, the findings might give pause to the current trend of converting PnR space to TODs. However, in their policy analysis, the authors encourage agencies to make these decisions at the station level, and to consider adjacent land use and proximity to the urban core when doing so.

The researchers also recognized that despite the larger impact of parking on ridership, each jurisdiction examined emphasizes TOD over PnR, especially where PnR was not well used prior to the 2020 pandemic. This preference reflects explicit policy objectives such as meeting climate goals through reduced driving and expansion of walkable, TOD communities. Additionally, revenues from TOD to a transit agency are potentially more certain than those derived from owning and operating PnR.

Moreover, PnRs needn’t be free, empty space. They can be optimized using dynamic pricing to better manage capacity, thereby improving revenue return to the transit agency. The authors suggest that to address issues of equity, cannot afford to live within walking distance of a station—though they do not provide model policies or procedures to implement such a plan. In the report’s study areas, the majority of low-income people owned automobiles, and researchers posed the question of whether it would be better to have TOD housing, with a small portion allocated toward affordable units, or increase parking supply to have a broader impact. 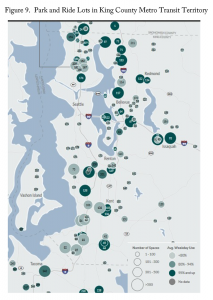 The authors, while concluding that PnR “is a more efficient and effective way to grow ridership than transit oriented development,” also emphasize that PnR and TOD can be employed collaboratively. Housing and retail can be built adjacent to a station, and nearby parking can bring both shoppers and commuters to the station area.

Parking, according to the report, generates more ridership per square foot than TOD, which might have only one commuting individual per housing unit. The authors distinguish, and encourage others to also differentiate, between PnR and TOD as short-term and long-term growth strategies, respectively. They ask that the transit agency consider whether it wants to immediately gain riders in a low-density area, or facilitate a gradual shift of land use and housing around its station.

The researchers discussed their findings during a recent webinar.