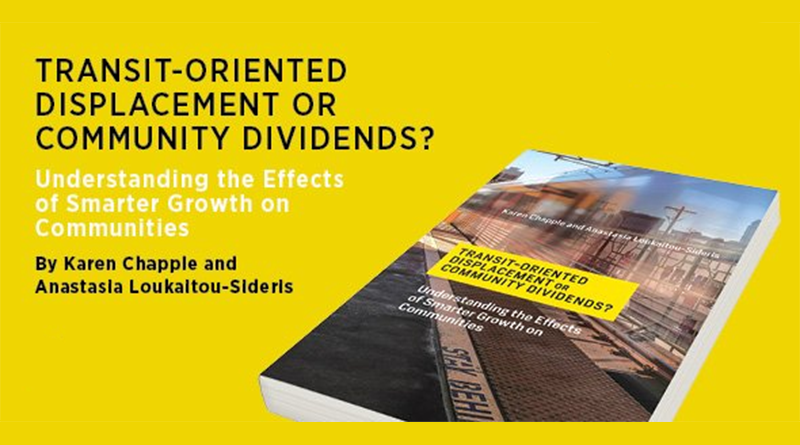 Tackling an under-researched connection between transit-oriented development (TOD) and displacement, Transit-Oriented Displacement or Community Dividends? by Karen Chapple and Anastasia Loukaitou-Sideris establishes the case for greater consideration of how TOD projects affect vulnerable residents within their geographic pull. Explicitly positioning their focus on the topic of displacement, Chapple and Loukaitou-Sideris address concrete gaps in the literature on gentrification and TOD practice within an American context. Namely, the second chapter, “Transit-Oriented Development as a Panacea for Rationalist Planning: The Bright and Dark Sides,” delves into how the American strain of “New Urbanism” and its relative lack of either state direction or metropolitan-sized scope—which are common to international TOD plans—have led to property value distortions when developers do commit to building TOD. Indeed, in raising questions of whether displacement, tight housing markets, and social segregation are methodologically measured and incorporated into our understandings of TOD, Chapple and Loukaitou-Sideris present both planning researchers and practitioners with a new dimension to weigh during the development process.

The core case studies are distinctly Californian—highlighting empirical effects of TOD in the Los Angeles and San Francisco metro areas. However, the authors convincingly note that many environmental and sustainability policies were first implemented in California only to become more widely enacted, and recognize that TOD found early success in the state (with the City of San Diego’s recruitment of TOD pioneer Peter Calthorpe)—making it a prime geography for research and critique on the subject.

Moreover, the topic is increasingly important to those involved with transit-friendly planning and development as well as a host of other stakeholders. With the growing “housing crisis” reflected by the book and observed broadly in recent years, the importance of how housing vulnerability interrelates with TOD is undeniably relevant. Lack of consideration during the era of Urban Renewal for how projects affected and disaffected the housing of America’s most vulnerable renting populations ultimately hamstrung and demoralized the commitments and eventual legacy of the period. For our era of TOD, investigating questions of, and data on, displacement, as explored in “Transit-Oriented Displacement or Community Dividends?”, may prove critical to addressing unintended harms and avoiding a similar backlash.