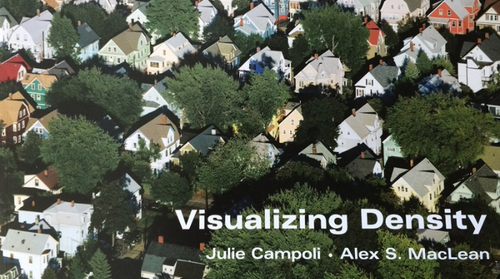 People cite all sorts of reasons for not supporting transit-oriented development. One of the most prevalent is a professed aversion to density. The problem is that density is hard to conceive—and is most often talked about in a way that is difficult for the public and many professionals to envision—as ratios. Residential development will be quantified in dwelling units per acre while non-residential development depends on FARs—floor area ratios, or the gross floor area allowable divided by the net area of the site. Neither of these conventions is well-suited to communicating how the density of a project will affect a neighborhood or answer the all-important question to most of the public–how will that density look in our community?

Campoli and MacLean, through text and color photographs, demonstrate the tenets of good density—highlighting locations where density has developed organically or been handled well. This book grew out of a series of Lincoln Institute courses by Campoli, a landscape architect and planner, and MacLean, an aerial photographer. Through the book and accompanying website (available with free registration), they demonstrate how the visual impact of density is not always what it seems. Merely stating a specific unit ratio often fails to relate the actual impact of proposed development or how projects of similar densities can ultimately have much different impacts on their communities. Visitors to the website can view the effect of different densities and examine how higher density projects can be more easily incorporated into existing neighborhoods. There is even an online game (Building Blocks) where users can create their own neighborhood by arranging houses, streets, yards and parks to create an environment that satisfies their needs and achieves a desired density.