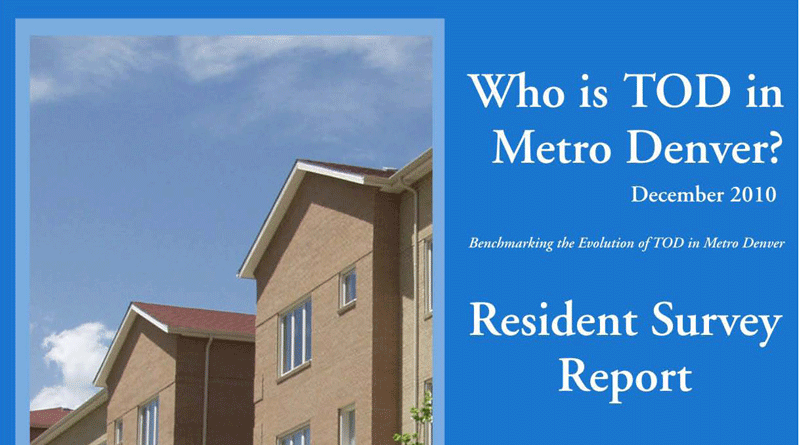 Who is TOD in Metro Denver? Resident Survey Report
By the Denver Regional Council of Governments

Understanding who lives in, works at, and visits TODs is important for planning for their success. In 2009-2010, Denver Regional Council of Governments (DRCOG) surveyed residents, employees, and businesses located near 35 rail-transit stations in the metro region—gaining a snapshot of individual, household and business characteristics and benchmarking behaviors and preferences of those living, working, and visiting TODs. The results of the study spell out how TODs affect travel behavior and attitudes, and, conversely, what factors contribute to a TOD’s success.

Researchers found two distinct groups who live and/or work near the stations. People who are the most concerned with access to nearby amenities—called “access focused” in the report—are the most likely to be attracted to TOD neighborhoods, while “home/car focused” people were more difficult to attract. They found that residents living in downtown Denver are more likely to be single, to rent housing, and to require less parking than those living elsewhere in the region. These downtown residents are also more likely to travel on foot, bike, or transit than those living in urban or suburban locations. Downtown businesses were more likely to take nearby amenities into their decisions on where to locate than those in suburban locales. For employees, an easy commute via mass transit or walking/biking is more important among those who work in downtown locations than for workers in other parts of the region.

These results are important. Studying the preferences of residents, employees, and businesses in the area provides valuable information that will enable TODs to be tailored to meet user needs. As studies such as this one in Denver are replicated, planners will get a better picture of who TOD is serving.