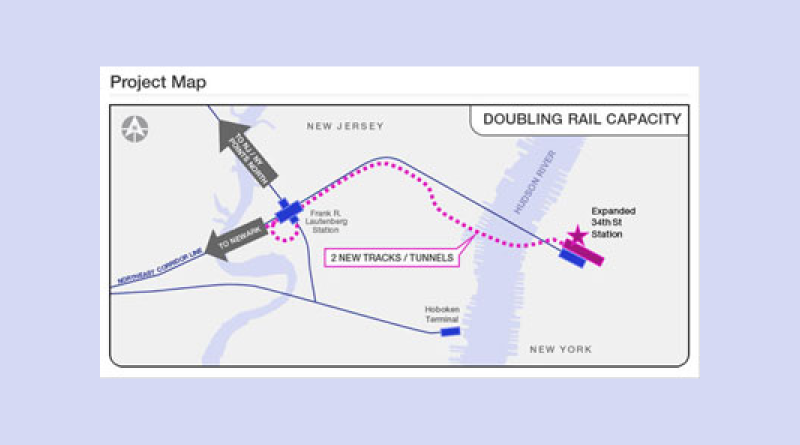 After more than a decade of planning and hoping, a pair of much needed new passenger rail tunnels underneath the Hudson River connecting New Jersey and New York City is becoming a reality, bringing a one-seat ride into Manhattan a step closer for thousands of New Jersey commuters. The $8.7 billion project, referred to as Access to the Region’s Core (ARC), is the first of its kind in a century—the type of large “mega project” mass transit investment that can transform a region. In 2017 when ARC opens for service, its new tracks will more than double the number of trains that can travel beneath the Hudson, allowing up to 48 trains per hour to travel between New Jersey and New York. Currently, only 23 trains can make the trip each hour. This additional train service is expected to eliminate 22,000 automobile trips a day. The project will also create a huge new six-track station under 34th Street in Midtown Manhattan adjacent New York Penn Station with convenient connections to all of Manhattan’s west side subway lines.

ARC, the first new link between New Jersey and New York City since the lower deck of the George Washington Bridge opened in 1962, represents the type of far-reaching infrastructure project that demonstrates how important public transit is to maintaining and enhancing the region’s vitality. The project is one of a number of major transit expansion projects currently underway in the region, including the Long Island Rail Road’s East Side Access project, the first phase of the Second Avenue Subway, and the extension of the Number 7 subway line to Manhattan’s far west side development zone. In doing so, the New York metropolitan area is providing vital arteries that will help ensure its economic health in the 21st century.

The Federal Transit Administration in March issued a key approval enabling construction to begin and NJ TRANSIT and the Port Authority of New York and New Jersey put the first contracts out to bid soon after. The first construction project is about to begin in North Bergen with a rail underpass beneath Routes 1 & 9. Tunneling will follow soon after within Manhattan. New Jersey assigned $130 million of its federal transit stimulus funds towards the project. The project is being promoted as a major job generator: 6,000 construction jobs over the next 10 years and an estimated 44,000 permanent jobs—many of which will be filled by those commuting from New Jersey. As it stands now, the Port Authority has committed $3 billion to the project, NJ TRANSIT has secured $1.5 billion, and an additional $1.25 billion will come from New Jersey toll road revenues. The federal government is expected to fund the remaining $3 billion. In another sign of federal support for the project, President Obama’s 2010 budget proposal includes an “Early Systems Work Agreement” for ARC and an additional $200 million in funding.

The project can play a crucial role in laying the groundwork for transit-oriented development in rail towns throughout the state. ARC can replicate the experience of NJ TRANSIT’s MidTOWN DIRECT service which dramatically boosted housing demand and home values and encouraged TOD near stations thanks to the introduction of one-seat service to Manhattan. ARC has the potential to do the same, but on a grander scale by providing one-seat service from virtually every one of NJ TRANSIT’s railroad train stations into midtown Manhattan. Once ARC is complete, the following rail lines will receive direct (transfer-free) service to Penn Station New York and the new 34th Street station, as well as increased service:

The following rail lines will get more frequent and express service:

The project will enable NJ TRANSIT to increase train frequencies for off-peak and weekend service, offering riders the convenience of using rail to destinations such as New York, Newark’s Prudential and Performing Arts centers, the Meadowlands Sports Complex, the Jersey Shore, and the state’s universities. In addition, ARC has the potential to open up options for new train lines to be built in the future.

The tunnel offers other profound economic and lifestyle benefits. Communities along all of New Jersey’s rail lines will have the opportunity over the next eight years to carefully consider and proactively plan for what the future with ARC will bring. By planning for more intensive mixed-use development within walking distance of their train stations, New Jersey’s rail towns can prepare to meet the needs of the majority of households by providing a lifestyle less dependent on auto use. ARC ought to be the impetus for rail municipalities to create compact, walkable neighborhoods centered on an even more useful and convenient NJ TRANSIT rail system. Those communities that are prepared for the changes that ARC will bring will be more likely to benefit from its impact.

April 22, 2010 Steph_Admin Comments Off on TOD Comes to Baltimore, Maryland

Emerging European-Style Planning in the US: Transit-Oriented Development

July 23, 2004 Stephanie DiPetrillo Comments Off on Emerging European-Style Planning in the US: Transit-Oriented Development