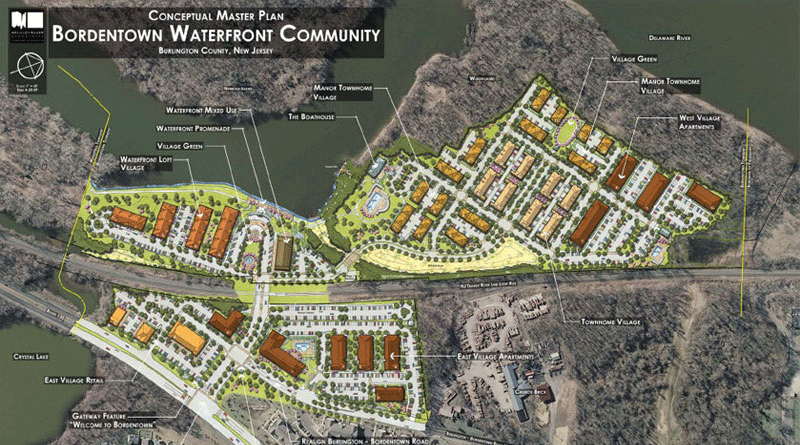 The first phase of a mixed-use transit-oriented development community in Bordentown, premised on later construction of a new RiverLINE light rail station, will likely begin this year. Bordentown Waterfront Community LLC, a joint venture of Princewood Properties LLC of Princeton, Arsenal Real Estate Funds, LLC of Morristown and Buckingham Capital Partners LLC of Haddonfield, will include 162 residential apartments, 62 affordable housing apartments for seniors run by Lutheran Social Ministries, and roughly 22,000 square feet of commercial space. A second phase of project construction is planned for a tract located along the river, in an area formerly used as a shipyard; there four derelict buildings will be demolished to make way for structures. This area is a state-designated brownfield site that will be remediated before construction begins on this part of the site. The entire project is expected to cost nearly $200 million in total to construct.

“Second-to-third quarter of [this] year I think is very realistic to start anything”, said developer Jeffrey Albert, of Buckingham Partners and a managing member of Bordentown Waterfront Community LLC.

He added that work on the station could begin in the latter part of 2011 if public resources can be assembled in time.

The developer is seeking public resources to pay the costs of building the new station, parking lot, improvements to access areas (including sidewalks and lighting) as well as for the required signal and grade crossing protection improvements. Moving forward with the project demonstrates continued interest in this type of housing and the desire to make housing accessible to transit, even during tough economic times when NJ TRANSIT is unable to fund station construction.

But first, the money will need to come through. In April 2010, Bordentown Township received a $250,000 federal grant for the station, but developers are seeking additional sources of funding for the station—which is expected to cost between $7 million and $8 million—as well as intersection improvements to nearby Route 130, site remediation, off-site sewer and water projects, bulkhead restoration, and the waterfront walkway.

“We’re looking for funding for a variety of public infrastructure, of which the rail station is a part,” Albert explained. “There are a variety of state programs that already exist,” including loan programs, he continued. “They do make money available for these kinds of improvements.”

“The sad fact of the matter is there is no private financing for this form of public infrastructure, so we are trying to find public sources,” Albert said. “We have obviously spent quite a bit of money getting it to this point but the lion’s share of construction costs really have to come from some sort of public finance. We are looking at a variety of different sources.”