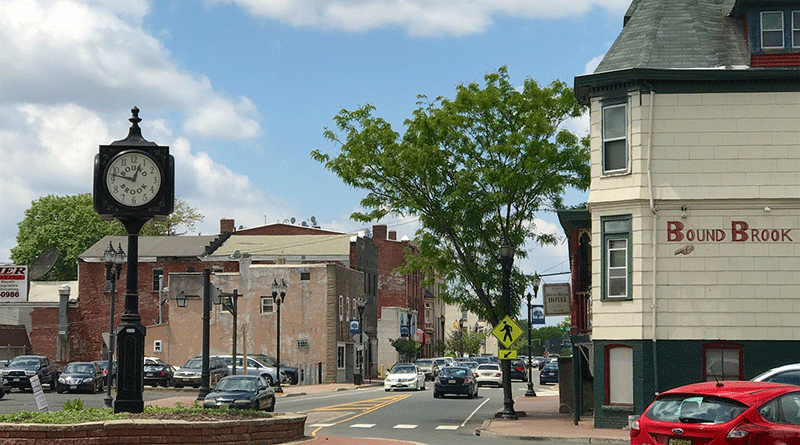 Located within the Raritan River floodplain, Bound Brook’s 10,500 residents are no strangers to flooding. In addition to the typical problems flooding creates, persistent and recurring flooding has been a major barrier to achieving true transit-oriented development. To protect the borough from rising levels of the river and surrounding creeks, in 1986 the Army Corps of Engineers began the $430 million Green Brook Flood Control that includes a series of levees, flood walls, detention reservoirs, and pumping stations that will protect against a 150-year flood. Anticipating the near completion of the project, Borough officials have started looking for redevelopment opportunities for Bound Brook’s downtown.

In August 2010, Bound Brook and the Regional Plan Association created the Downtown Urban Design Plan, which was incorporated into the Borough’s Master Plan that December. The plan focuses on development around the Bound Brook train station on the NJ TRANSIT Raritan Valley Line, as well as a waterfront trail that will link to both present and future regional trails. The Plan supports Smart Growth ideas and encourages pedestrian-friendly, mixed-use development.

The Plan also acknowledges and accounts for Bound Brook’s shifting demographics. Over the last two decades, Bound Brook has seen an influx of Hispanic residents and businesses. The Borough hopes to use its cultural diversity as an asset rather than a barrier to redevelopment. By encouraging economically sustainable and dynamic businesses from both the Hispanic and non-Hispanic community, Bound Brook hopes to erase the anti-growth, anti-business image that has long dogged it.

In early 2011, the Borough sent out a Request for Letters of Interest and Qualifications for redevelopment of property close to the rail station. Borough officials were looking for a proposal that followed the Master Plans’ visions of a pedestrian-friendly, mixed-use downtown and remained consistent with Smart Growth ideas. Capodagli Property Company LLC of Pompton Plains was chosen for the project with a proposal to build 240 luxury apartments on the eastern end of Main Street.

In January 2013, the North Jersey Transportation Planning Authority (NJTPA), working with the Bound Brook Economic Development Advisory Committee, will kick off the Bound Brook Downtown Urban Design Plan Implementation Project. This project is a pilot being conducted through the NJTPA’s new local planning assistance program, Planning for Emerging Centers, which provides funding to support municipal planning and regulatory work to promote walkable, transit-supportive communities. Implementation of the Downtown Urban Design Plan will help facilitate a more walkable, bikeable downtown that leverages the availability of transit options to make downtown Bound Brook an attractive destination for residents, visitors, and businesses. This project will include an evaluation and update of the Borough’s zoning, building, and parking regulations to streamline the development application, review and approval process; encourage green building, landscaping, and streetscaping; permit alternative energy systems for buildings; establish new parking standards; and evaluate opportunities for improved bicycle and pedestrian access to the riverfront.

Although interest in redeveloping the area around the train station is increasing, there is still much to be done. Borough officials hope that the Main Street development planning effort and soon-to-be-completed flood control project will encourage increased development and a change in the public’s perception of downtown Bound Brook.