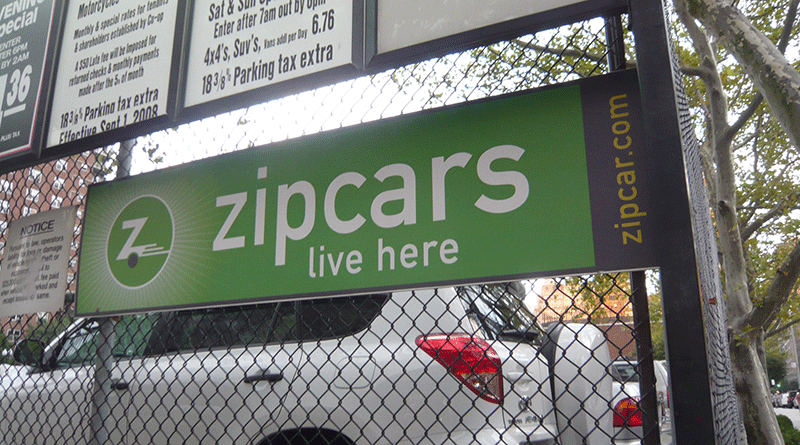 Car-sharing has come to New Jersey, and transit is a big reason why. Zipcar, the largest car sharing company in North America, has recently set up locations in Hoboken, Jersey City, New Brunswick, and Princeton, each of which serves as a public transportation hub. Flexcar is another national car-sharing program based primarily on the West Coast and in the Washington, D.C. metropolitan area.

Zipcar offers self-service, on-demand cars by the hour or day. Rates start at $8–9 per hour and $60 per day, and include numerous benefits, such as unlimited gas fill-ups, a guaranteed parking space at pickup location, maintenance and insurance. The process is simple: Zipcar members reserve a vehicle of their choice, then pick it up at one of several convenient locations. All fees are automatically deducted from a credit card on file.

The service provides several important financial, environmental, and community impacts. According to Zipcar, 43 percent of members owned a vehicle within the last five years, but only 11 percent continued to own a car after becoming members. In addition, members reported a substantial drop in driving, from an average of 5,295 miles per year prior to joining Zipcar to just 369 miles per year since becoming members. The program has enabled members to save an average of $435 per month when compared to car ownership. By driving less, car-sharers help reduce congestion, vehicle emissions, and fuel consumption.

Zipcar chooses sites based on several criteria, including population density, parking, traffic, and community interest in transportation alternatives. In addition, Zipcar recognizes the need for a well-developed public transportation system, as most members use the service to supplement the existing transit network in their area. For this reason, many vehicles are located at or near public transportation hubs.

This is indeed the case in New Jersey, as all four Zipcar sites are located within easy walking distance of local transit stations. The mayors of Hoboken and Princeton reached out to Zipcar to help alleviate parking and congestion challenges they were facing. In New Brunswick, the Zipcar pick-up/drop-off spot is located within one block of the NJ TRANSIT train station on the Northeast Corridor line. This location has proven very successful, as it allows Rutgers University students to get rid of their vehicles and carpool only when needed to supermarkets, shopping malls, laundromats, or other regional “day-trip” destinations. To date, 23 other universities around the country have set up service with Zipcar.

Perhaps the most important impact of car-sharing is its ability to change driving and personal behavior patterns. Having to walk a block or pay for a vehicle by the hour or day changes the way one thinks about personal vehicles. As a result, Zipcar members are more likely to be frequent users of public transit, with members reporting a 14 percent increase in their public transit trips. In addition, since joining Zipcar, members report a 10 percent increase in bicycling trips, and a 26 percent increase in walking trips. Zipcar estimates it alone has taken nearly 20,000 vehicles off the road.

Car-sharing programs like Zipcar and Flexcar are important additions to the TOD landscape. The design of many New Jersey municipalities requires commuters and other public transit riders to walk long distances or get dropped off at stations. Additionally, some destinations are relatively inaccessible by rail. By providing this convenient car-sharing option within walking distance of transit stations, municipalities help commuters and local residents expand their travel options.