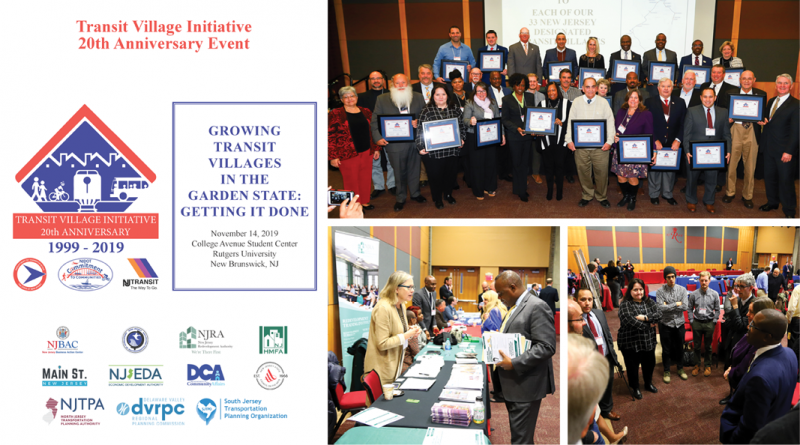 On November 14, 2019, state and local officials and members of the planning community gathered at the College Avenue Student Center at Rutgers University, New Brunswick to celebrate the 20th anniversary of the Transit Village Initiative. The event was a chance to look back on the achievements of the 33 municipalities that have joined the program and to look forward to the future of Transit-Oriented Development (TOD) in the Garden State.

The Transit Village Initiative started in 1999 as a multi-agency partnership led by the NJ Department of Transportation (NJDOT) and designed to promote smart growth and the revitalization and redevelopment of areas around transit facilities. The program started with five municipalities – Morristown, South Orange, Rutherford, South Amboy and Pleasantville – and grew to comprise more than 30 communities located along bus and train lines around the state.

Lieutenant Governor Oliver cited the huge success of the Transit Village Initiative in building housing and other development, creating jobs, and promoting communities engaged in smart growth. She cited the work of NJDOT and of the NJ Department of Community Affairs (NJDCA) through the New Jersey Housing and Mortgage Finance Agency, Main Street Program, and the NJ Historic Preservation Program.

NJDOT Commissioner Diane Gutierrez-Scaccetti inspired event attendees by citing the ways that the Transit Village Initiative helps to create localities that serve the needs of all New Jerseyans. She spoke about the program’s record of producing places and housing that meet diverse needs and changing demographics. She also discussed how the essential component of this effort – public transit – contributes to the success of the initiative and the state overall by connecting people and places and complementing the entire network of transportation that encompasses all modes of travel.

NJ TRANSIT President and CEO Kevin Corbett reviewed the history of sprawl and the origins of the Transit Village Initiative as part of an effort to counteract sprawl along the state’s highway network. He discussed the tremendous impact that transit has had on real estate development in the state and how investment has been strong in communities served by transit. He also drew attention to the work of the recently reinvigorated NJ TRANSIT Real Estate and Economic Development Department.

Following these opening remarks, NJDOT recognized the work in each of New Jersey’s Transit Villages and the progress of the program over the past 20 years. The event then featured two discussion panels with local officials, representatives from state agencies involved in the Transit Village Initiative, and other regional and nongovernmental organizations.

Vivian Baker, Director of Programmatic Planning at NJ TRANSIT, moderated “33 Strong Communities Getting It Done,” a panel discussion offering a retrospective look with officials from communities that joined the initiative at different points during the 20-year span:  Pleasantville (1999), Riverside (2001), Somerville (2010), East Orange (2012), and Plainfield (2014). This “peer-to-peer” discussion allowed participants to share insights gained through their experiences in planning and implementing TOD.

Linda Peyton, City Administrator for Pleasantville, discussed some of the elements that have helped the city to grow as a transit village. She cited the city’s location near Atlantic City, the strong use of transit, and champions who have offered their support. These champions have included the city’s elected officials and members of its large senior community who understand the need for good transit access to meet their daily needs. She also spoke about the use of external funding from sources such as the Urban Enterprise Zone and Opportunity Zone programs and Superstorm Sandy recovery funds, as well as those from the Transit Village Initiative itself.

Meghan Jack, Town Administrator for Riverside Township, noted that the Transit Village Initiative was key to helping the community adapt to a changing economy following the housing market crash in 2008. Dan Jennings, Director of Policy, Planning, & Development for East Orange, also spoke of the benefits that the Transit Village Initiative and TOD have brought to that community. The Initiative generated opportunities to invest in placemaking efforts such as renovating existing commercial plazas and organizing pop-up markets, which in turn attracted new businesses to the community. East Orange has been proactively taking steps to address residents’ concerns about gentrification by ensuring affordable mixed-income housing.

In Somerville, Transit Village Initiative seed money from NJDOT funded the conversion of Division Street, which connects the community’s main commercial street to the train station, from an under-performing streetfront with narrow sidewalks and many vacant commercial spaces into a vibrant, pedestrian-only thoroughfare. Colin Driver, Director for Redevelopment in Somerville, emphasized that communities wishing to advance TOD must have “skin in the game” by making public investments that attract investors, housing developers, and commercial retailers.

Representing the newest Transit Village on the panel, Plainfield Mayor Adrian Mapp discussed the need to build on the work of those who have come before him and being prepared for change. He cited his city’s creation of 13 redevelopment areas – all proximate to rail or bus facilities – and the support of the city’s business community. He discussed the city’s efforts to market itself through its own commercial and social media, and to ameliorate the unwanted effects of gentrification though redevelopment agreements and workforce training and employment programs.

A theme common to all the speakers’ comments was the importance of collaboration. Municipalities must work with local residents, businesses and other local stakeholders, as well as external partners such as NJ TRANSIT, NJDOT and other state agencies.

The second panel, “Visions for the Transit Village Future,” moderated by Associate Professor Michael Smart of the Edward J. Bloustein School of Planning and Public Policy, considered what the future may hold for the communities committed to TOD. Panel members discussed the need to keep up with new technology, new forms of mobility and generational preferences. The panel included Kevin DeSmedt (Senior Policy Advisor at the NJ Economic Development Authority (NJEDA)), David Bruccoleri (Project Manager at the NJDOT Division of Local Aid & Economic Development), Jeff Perlman (Senior Director for Planning at the North Jersey Transportation Planning Authority (NJTPA)), Mike Manzella (Director of Transportation for the City of Asbury Park), and Laura Torchio (Deputy Director of Transportation at the Project for Public Spaces).

Kevin DeSmedt discussed ongoing and upcoming programs that support transit-oriented development, adaptive reuse projects, brownfield development, and Complete Streets initiatives. In discussing NJEDA’s programs, he emphasized the importance of small entrepreneurial and community finance programs in growing Transit Village economies, such as those that have supported the development of co-working spaces, as well as community-based lending and micro-business lending. David Bruccoleri also discussed funding opportunities and stressed that NJDOT programs are not limited to Transit Village funding; communities should consider state grants that support bicycle and pedestrian infrastructure improvements and those aimed at Complete Streets programs as ways to advance community redevelopment and TOD improvements.

Jeff Perlman explained how NJTPA is responsible for regional planning and how the organization plans for the use of and programs federal funding for transportation projects throughout the region. He outlined how municipalities can tap into these federal funding programs in support of TOD projects, and discussed NJTPA’s Emerging Centers Program, which assists municipalities in planning for more sustainable, transit-supportive, and walkable communities.

Mike Manzella spoke about Asbury Park’s experience with hosting micro-mobility services, a bike-share and e-scooters that community members and visitors use to get around the city and to make first-mile/last-mile connections to/from the Asbury Park Station and local bus stops. According to Manzella, a quarter of the scooter trips taken during a pilot period originated from a neighborhood that is home to many of the community’s lower income population to its transit facilities. Laura Torchio of the Project for Public Spaces discussed the importance of promoting place (which is memorable and people-centric) over space (which lacks such character) and pointed out that while tech-drive mobility has become an indispensable part of TOD, there are segments of the population who do not have access to the mobile devices needed to use app-based services.

To close out the event, Andy Swords, Director of the NJDOT Division of Statewide Planning, and Laura Torchio of Project for Public Spaces shared the results of engagement activities held during the event and used the results to spur discussion about the future of the program. These activities, organized by Stephanie DiPetrillo of NJTOD.org and the Alan M. Voorhees Transportation Center/Rutgers, included a brief survey on areas of concern and areas of opportunity for Transit Villages. The flash poll showed five top priorities of among communities participating in the Transit Village Initiative: funding, equity, connectivity, public engagement, and parking.

With Laura Torchio leading the charge, attendees discussed ways to inform and involve the public. Participants cited the need for intense communications programs aimed at and dialogue with local businesses and residents to gain support for transit-oriented projects. Another concern raised was a lack of funding for place making projects, which some have addressed through fundraising initiatives and applications to third-party grants. Finally, discussion turned to zoning changes and active efforts to create affordable housing, strategies designed to create more equitable development.

The activities revealed the many challenges that remain 20 years after the Transit Village Initiative launched; but they also showed there is an energized and dedicated community of practitioners with ideas and solutions for the 20 years ahead.