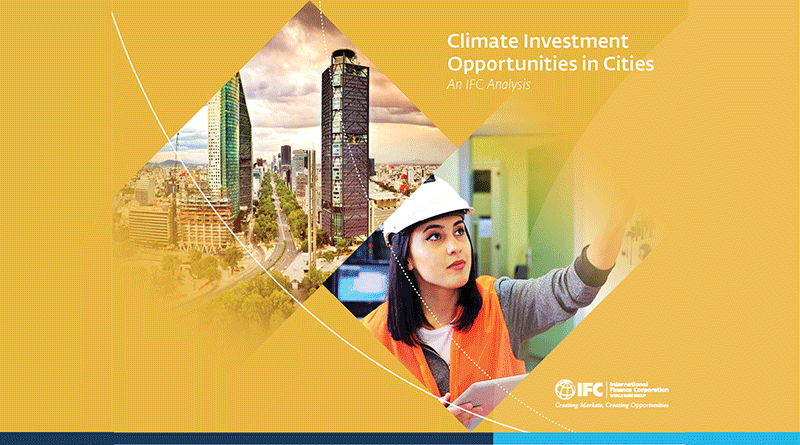 In November of 2018, the IFC published the fourth report in its series on climate investment opportunities in developing regions across the globe. This year’s report addresses the opportunities available in urban markets, home to half the world’s population and producers of 70 percent of global carbon emissions. The report notes the dollar value of investments in six specific sectors: waste, renewable energy, public transportation, climate-smart water, electric vehicles, and green buildings (see Investment Potential to 2030). The authors analyzed these sectors in six developing regions or “emerging markets” encompassing East Asia and the Pacific, South Asia, Europe and Central Asia, Middle East and North Africa, Sub-Saharan Africa, and Latin America and the Caribbean. They also detailed case studies of ongoing financed projects within each sector, as well as “city deep dives” in each region to show how urban governments are leveraging private investment in all sectors collectively to create long-term, environmentally friendly plans for their cities.

The IFC’s report specifically addresses Transit-Oriented Development opportunities in the “public transportation” sector. It estimates $1 trillion available in public transportation investment potential through the year 2030. Most of this opportunity is concentrated in the Middle East & North Africa and South Asia (see Public Transportation Investment), in part due to the expected population growth in these regions over the next 20 years. South Asia’s population is projected to increase by 250 million by 2030, while the Middle East’s population will double by 2040.

Across the globe, cities are including TOD projects in their municipal long-range plans. Rajkot, India’s Development Plan 2031 places a strong emphasis on creating transit oriented zones, with planned infrastructure projects to be financed by public-private partnership opportunities through its Rajkot Municipal Corporation. Peshawar, Pakistan is restructuring its Bus Rapid Transit corridor to build bike lanes and allow for a distance-based fare system on buses. Antalya, Turkey is investing in a tram line to connect the northern suburbs to the downtown commercial center. Dar es Salaam, Tanzania is constructing 20 kilometers of BRT lanes that are expected to increase property values by reducing congestion on city streets, and Santa Fe, Argentina, after redeveloping its Belgrano Railway Station into a convention center, will now shift focus to revitalizing the surrounding lands through mixed-use development.

The IFC report notes an important issue with many of these planned developments—the nature of emerging markets makes it difficult for local governments to find the funding for planned projects. Limited tax bases and public funding availability, a lack of national support, low creditworthiness, perceived risks on projects, and increasing upfront costs are some of the major obstacles cities face in getting the financing necessary for their climate-smart projects.

As the IFC report points out, these issues are not unique to “emerging markets.” In the United States, Detroit, MI is a prime example of a city facing difficulties with municipal debt financing. Deindustrialization and patterns of urban decay have resulted in a decline in the city’s tax base over several decades. These conditions, coupled with high poverty rates, have increased liability for private investors seeking to work in the city. However, through the efforts of local government, the city is experiencing a resurgence in development, supported in part by public-private-nonprofit partnerships.

The report states that many cities and countries are taking similar steps to overcome barriers, by enhancing their project development information, actively working to improve their creditworthiness through strategic initiatives, and harnessing the support of the national government. Current projects are being successfully financed through the issuance of green bonds (government-backed securities restricted to green investments), land-value capture, and public-private partnerships. The IFC emphasizes the need for emerging markets to navigate from planning to pilots, pilots to projects, and projects to partnerships to properly leverage private investment and conduct successful green, resilient projects, and that the organization is ready to support cities through this process. As US cities also begin to shift the focus of development towards green infrastructure, they can utilize this method of planning and piloting for success to ensure major projects are profitable and beneficial for their residents and the environment. Large-scale, climate-aware projects supported by public-private partnerships have the potential for positive community impact and economic prosperity for stakeholders, just as the IFC has addressed in its report.