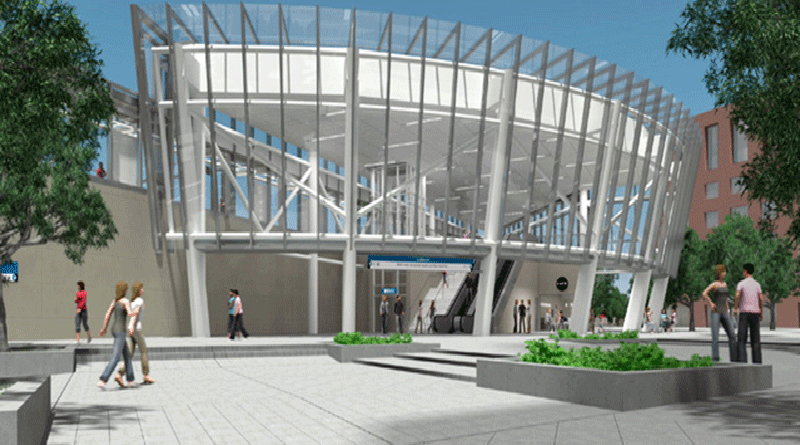 Located across the Passaic River from Newark, the town of Harrison’s past and future is intrinsically linked to its public transit accessibility. PATH trains depart every 3-5 minutes during rush hour, connecting Harrison with Newark, Jersey City, Hoboken, and New York City, a 20-minute ride away. At Newark Penn Station, PATH riders can transfer to NJ TRANSIT’s Northeast Corridor and North Jersey Coast Line (both offering one-stop connections to Newark Liberty International Airport and Secaucus Junction rail station) as well as Raritan Valley Line trains, the Newark Light Rail system and numerous bus lines. The town is also well-served by buses that connect to NJ TRANSIT train stations, the Newark subway, PATH stations, and the cities of Newark, New York City, Elizabeth, and Jersey City, among others.

With this outstanding transit accessibility, the 1.2-square mile community has embarked on an ambitious effort to remake itself through its Waterfront Redevelopment Plan. The vision outlined in the plan calls for the transformation of 275 acres of obsolete industrial facilities into a new transit-oriented, pedestrian-friendly, mixed-use development along the town’s riverfront. Historically, the town’s economic engine was heavy industry, with manufacturing mostly situated in its southern third. Called a ”hive of industry” by President William Howard Taft in 1910, Harrison adopted the nickname, adding it to the town flag. This label was applicable until the late 1960s when the bulk of Harrison’s industry had left. From the mid-1970s to the 1990s, the town lost more than $150 million in business ratables from its tax rolls and was faced with a rapidly deteriorating and underutilized industrial area.

Preliminary efforts at revitalization date from the mid-1990s. In 1997, the Harrison Town Council deemed the southern industrial area “in need of redevelopment” and two years later the Harrison Redevelopment Agency was formed. After a multi-year planning process coordinated between Harrison and a number of private developers by the community planning and design firm, Heyer, Gruel & Associates LLC, the Waterfront Redevelopment Plan was born with the vision of transforming southern Harrison. The plan provides a 20-year framework to re-make the area with more than 7,000 new residential units in a range of sizes and prices, 3.4 million square feet of office space, more than one million square feet of retail space, an entertainment complex with a 25,000-seat soccer arena for the Major League soccer team the New York Red Bulls, street-level retail, and a waterfront gateway park. All new housing, jobs, shopping, entertainment and recreational opportunities will be within walking distance of the Harrison PATH station which is well linked to the state’s transit network.

The designated redevelopment area encompasses about 35 percent of the town, covering most of the area south of I-280, straddling both sides of the Harrison PATH station and stretching to the Passaic River. The redevelopment area is located in the midst of existing residential, commercial, and office uses in Harrison, as well as across the river in Newark, and existing community facilities. The redevelopment effort will build upon the area’s existing infrastructure, including roads, public transportation, and water, electric and sewer facilities, but will also require upgrades to accommodate the higher densities and new uses. The plan calls for a new road network with on-street parking, wide sidewalks, and street trees.

A number of projects are underway:

It should be noted that all the new development will occur within walking distance of new parks and open spaces. The planned waterfront gateway park will restore a valuable resource for Harrison that has been sorely lacking for generations – access to the Passaic River waterfront, one of the state’s most environmentally abused and underutilized waterways. Once complete, the walkway and park will remain in the public domain, offering a significant recreational amenity for the town. In addition to providing open space, the urban greenway project will restore sensitive stream bank areas and incorporate flood control measures to protect the town from flooding from the Passaic River.

The vision outlined in the Harrison Waterfront Redevelopment Plan is becoming a reality. As Harrison redevelops as one of New Jersey’s premiere transit-friendly municipalities, it is providing its residents with a new economic base, thousands of new housing units, and a long-sought connection to the Passaic riverfront, and should serve as a model for other communities looking to redevelop around transit.