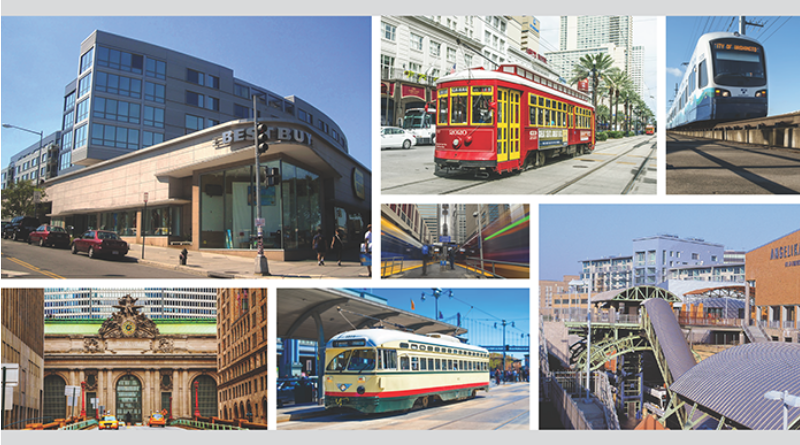 The transit-oriented development (TOD) sector has a long history of acting in conflict with historic preservation (HP) efforts in many cities. For example, in 1963, the historic Penn Station in New York City was demolished to make room for a much-needed, higher- traffic station and denser neighborhood. This event was the catalyst for the creation of the New York Landmarks Preservation Commission, which was able to successfully save Grand Central Station from suffering the same fate five years later.

One of the tools used by developers to maintain the heritage of a building such as Grand Central Station, while also building much needed density and housing around transit, is the Transfer of Development Rights (TDR). TDR is one of several tools referenced in a 2016 guidebook on Facilitating Historic Preservation through Transit-Oriented Development, written by Dr. John Renne of the School of Urban and Regional Planning at Florida Atlantic University (and Bloustein School graduate) and Dr. David Listokin of the Bloustein School of Planning and Public Policy at Rutgers University. Renne and Listokin hosted a webinar on October 26, 2016 to discuss the guidebook and how city officials and planners can use its information to promote both TOD and HP efforts. Along with an overview of the guidebook, the webinar featured guests from New Orleans who discussed their efforts to preserve the city’s history while encouraging development along resurging streetcar lines.

Renne and Listokin spoke on how TOD and HP goals can help preserve city environments, save energy, boost local economies, attract residents and visitors, and encourage redevelopment efforts. They elaborated on the need for those working in each of the fields to be informed about the other in order to conduct successful planning efforts. Half of fixed route transit stations are within a half-mile of historic districts, and 36 percent of historic districts are within a half-mile of train stations; thus, mutual understanding and compromise between the fields is a precursor to success. Additionally, they described tools such as TDR that can be employed when historic districts and transit districts do not overlap. TDR practices allow the maximum densities in historic districts to be transferred to other areas, such as TOD districts. While the historic area will not meet its “highest and best use,” TOD projects are able to exceed their allowable zoning capacity as a result of TDR.

The guidebook provides background and context for both fields, as well as basic descriptions of what constitutes a TOD or historic district designation to inform unfamiliar readers. The guidebook is split into thirds – the first third discusses TOD, the second third covers HP, and the final third provides information about legislative tools like tax credits that can be used in both fields to further goals, and explores how stakeholders and Public-Private Partnerships can assist with efforts.

To further expand on the guidebook, the YouTube webinar features three guests from New Orleans, Louisiana who describe their experiences working on TOD projects in the historic city. James Amdal from the Merritt C. Becker Jr. University of New Orleans Transportation Institute outlined how his center utilized both TOD and HP best practices when developing the city’s Growth Management Plan, which contributed to the creation of a $500 million South Market historic district along the new Loyola Streetcar line. Marcel Wiznia of Wiznia Architecture + Development discussed numerous historic rehabilitation projects his organization worked on, all along streetcar lines. Finally, Pres Kabacoff of HRI Properties detailed how New Orleans transformed the Iberville and Downtown neighborhoods into thriving mixed-use areas through a combination of historic preservation and TOD practices. These three speakers provided real world context for how the guidebook can be used to create on-the-ground solutions that help cities maintain their historic character while also furthering growth around their transit assets.

January 26, 2008 Steph_Admin Comments Off on Towers Rise in Journal Square