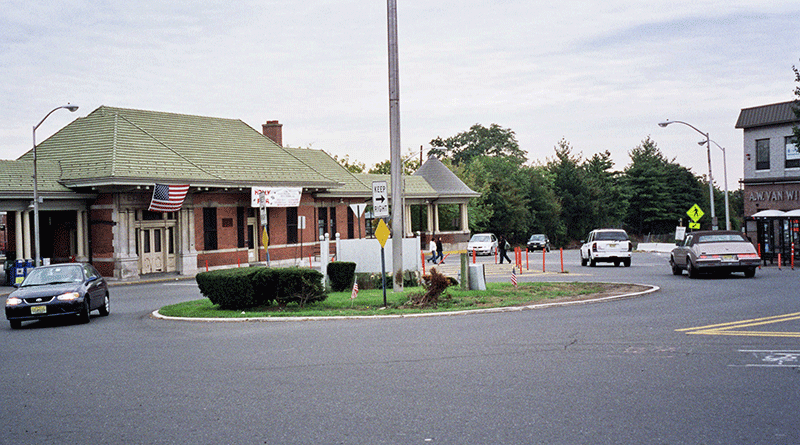 Located in one of the first five transit village communities designated in 1999, the Rutherford Station is undergoing a two-year restoration of the historic station’s original exterior and improvements to its interior. Located on NJ TRANSIT’s Bergen County Line, the station is listed on the State and National Registers of Historic Places. The $1.4 million station exterior renovation project, completed in June of this year, restored masonry along with the copper-clad window enclosures, and repaired or replaced window sills, doors, columns, and soffits. Additional work included thorough cleaning of the station façade, composed of brick, sandstone, limestone and bluestone. Work on the interior began this May. Funded by the federal government, the $9 million refurbishment includes restoration of the main station building’s ceiling and floors, windows, doors, wood benches, plaster surfaces, and wood frames and moldings, as well as the replacement of exterior windows and doors in the taxi stand building.

Rutherford Station was constructed in 1898 and serves more than a thousand riders each weekday, making it the third busiest station on the Bergen County and Main lines. Travel from Rutherford Station to New York Penn Station takes about 30 minutes with a transfer at Secaucus Junction. Rutherford operates a community shuttle service during commute times, providing access to the station for those who live too far to walk. Between the morning and evening rush, the borough provides a free downtown bus service to all residents. In addition, the station serves as access to local businesses. The borough, in partnership with the Meadowlink Commuter Services, operates a jitney service connecting commuters arriving by train to two work sites, the Federal Reserve Bank in East Rutherford and the Meadowlands Office Complex. The station also is a stop along two well-utilized bus routes. The #76 bus connects Hackensack with Newark and carried more than 1.38 million riders in FY2008. The #190 bus links Paterson with the Port Authority Bus Terminal in New York and had more than 3.18 million riders in FY2008, a rise of 3.4 percent over the previous year.