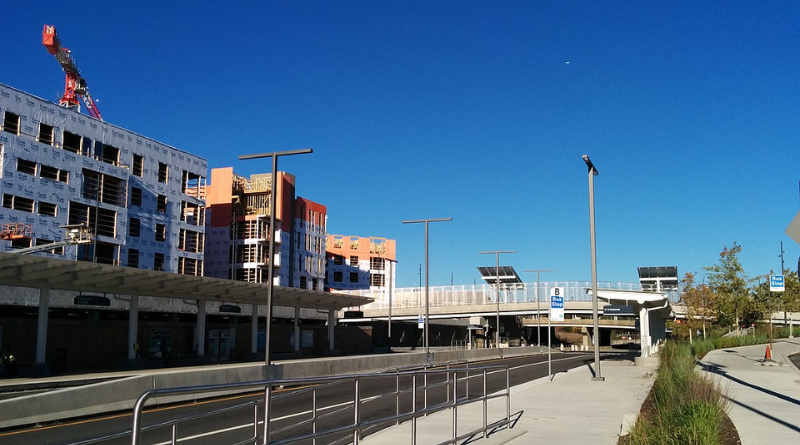 BRT and Escaping a Niche

Despite advantages in affordability and adaptability, implementation of Bus Rapid Transit (BRT) in New Jersey has proved more challenging than experts foresaw at the turn of the millennium. Various design and service elements define BRT travel, such as dedicated boarding platforms and priority bus travel lanes, but its core spirit can be described as treating bus stations like train stations. BRT can support higher density, transit oriented lifestyles at a lower intensity and cost than is economically possible for light rail, and can make riding a bus as reliable, fast-boarding, and seamless as riding a train.

Yet, this comparison leaves BRT subject to a fundamental argument it has struggled to refute: If a city or region could benefit from the train-like benefits of a new BRT service, why not build a light rail line instead? Literature and public opinion suggest a perception of BRT that questions its permanence, acute pollution and noise, and maximum capacity. To a certain degree, these concerns are answerable. In practice, bus routes rarely get cut (1), new EV or other alternative fuel (such as hydrogen fuel cell) vehicles address the noise and air quality problems of decades past, and if a BRT line garners too much ridership then further investments in other modes would benefit from this increased base of transit riders. Indeed, if these concerns fully explained why BRT has not caught on broadly in the United States or in New Jersey, there would likely be more operation of BRT service in the Garden State than the few cases such as Newark Go Bus and the Lincoln Tunnel express bus lane.

As is often the case, the reason comes down to land use. More specifically, when policymakers and stakeholders consider Transit Oriented Development (TOD), the mystique and prominence of rail infrastructure can cloud the density potential of BRT systems. The reliability and quality of transit service that BRT stations provide can support more intensive land use—such as mixed-use, multifamily developments—than is often expected of traditional bus travel. The literature notes that with a few best practice exceptions, the North American discourse on how BRT can facilitate TOD is muted. A 2006 review of TOD residential density thresholds on the West Coast held significantly lower expectations for bus travel than light rail (1). For BRT TOD (or BTOD) to proliferate, it must change how developers and planners see its relationship to land and distance its image from traditional bus travel.

Overcoming the associations between traditional buses and BRT is complicated by the fact that BRT “usually replaces an existing bus-based service” (1) rather than being “introduced as an entirely new mode” as are rail lines (1). Within such framing, it is easier to understand why investors and developers interested in TOD are more skeptical of BTOD’s potential. These reservations are compounded by BRT’s lack of the same level of physical commitment as light rail investment opportunities, i.e., train tracks that cannot be replaced for automobile use. For BTOD to become successful in New Jersey or elsewhere in America, it must present an air of “newness” that signifies the transformation it can bring to the built environment. For instance, NJTRANSIT’s Go Bus 28 presents in-vehicle amenities such as a luggage storage area, overhead storage, and hand-straps (2) that play to its position as a route for travelers to and from Newark Liberty International Airport but do not necessarily translate well as features that would make commuter BRT or BTOD successful.

One potential New Jersey BRT line that has seen gradual improvements to traditional bus services since 2006—the proposed Route 9 BRT Corridor—would traverse a 21-mile stretch in Middlesex and Monmouth counties. Despite the path generating one of the highest levels of bus ridership in the state (6), a lack of sufficient land use components has hampered Route 9 BRT Corridor plans. To address this disconnect, a partnership between NJ TRANSIT and Old Bridge received $470,000 from the Federal Transit Administration to develop a TOD study along the Route 9 bus corridor (3). The TOD study aims to improve accessibility and affordability of the planned BRT line and facilitate comprehensive planning of the surrounding built environment that would support long-term success. The funding of this project demonstrates the enthusiasm within the transit world for BRT in Central Jersey, which should be matched with BTOD to enhance the ridership potential from bus stations and adjacent areas.

These efforts are already the standard for competing modes. When light rail stations are constructed, municipalities court developers through rezoning and an understanding that the character of properties surrounding the station will change, and for these reasons, developers lend their capital, political clout, and efforts to seeing a transit service completed. Ensuring that potential Route 9 BRT stations in places like Old Bridge or Howell facilitate BTOD will be critical in drawing these energies from the land-side of this equation. The proposed South Jersey Bus Rapid Transit System, which would connect Camden and Gloucester counties with downtown Camden and Philadelphia, makes explicit mention of enhancing amenities at its stations (4). This broader trend signals that the transformative benefits of BTOD are a recognized factor in recent BRT plans in New Jersey.

Efforts elsewhere in the United States illustrate several lessons that New Jersey BRT projects would be wise to incorporate. A 2021 DivisionConnects case study memo draws on a variety of BRT projects in the American context to illustrate the relationship of land use policy to the success of BRT service. Using Pittsburgh’s East Busway and its more intensive interaction with land use around stations (5) as an example, the case study suggests “station area planning” can best leverage the potential of BRT (5). The memo highlights the need to “get plans and transit-supportive programs in place before or in conjunction with capital improvements” (5) and cites zoning changes, promotion of walkable community development, and parking reforms as examples of this strategy (5). As the agency behind the East Busway, the Pittsburgh Regional Transit (formerly known as the Port Authority of Allegheny County) worked with the City of Pittsburgh to facilitate extensive BTOD around station areas (5). Their cooperation has enabled deeper efforts on first-mile, last-mile travel, transit zoning overlays, and affordable housing goals (5).

Another case study is the Vine, a BRT offered by C-TRAN in Vancouver, Washington, which supports linking land use to BTOD transformations. Though the Vine operates within street travel lanes and mixed traffic, its status as a separately branded service with elevated platforms and off-board fare payment has material travel time and perception differences to traditional bus travel (5), which has helped to foster cooperation among stakeholders on implementing BTOD features. Transit-friendly development standards—such as mixed development designation, zero required setbacks, street-facing buildings, and other form-based code elements—were established in relation to the Vine’s service area and portions of its BRT corridor. Presenting a “newness” or “uniqueness” of the Vine BRT service appears critical to it sparking BTOD where full commitments to BRT services (such as exclusive bus right of ways) could not be achieved.

These projects emphasize that BRT needs to actively transform built environments to escape the perceived limitations of traditional bus services. Calling a traditional bus service “BRT”—without improving stations, lane priorities, or surrounding land use potential—will not garner the institutional or community support that BRT needs to move beyond the planning stage. The historical ease of compromising BRT functions now prompts planners of modern BRT projects to envision land use considerations and transit conveniences at the earliest stages to generate local buy-in and allies. BRT projects need to define themselves by their high quality of service and ability to improve quality of life. Moreover, BRT can retrofit infrastructure designed for cars for high frequency, provide comfortable transit service, and more efficiently support the pedestrianization of lower density developments.