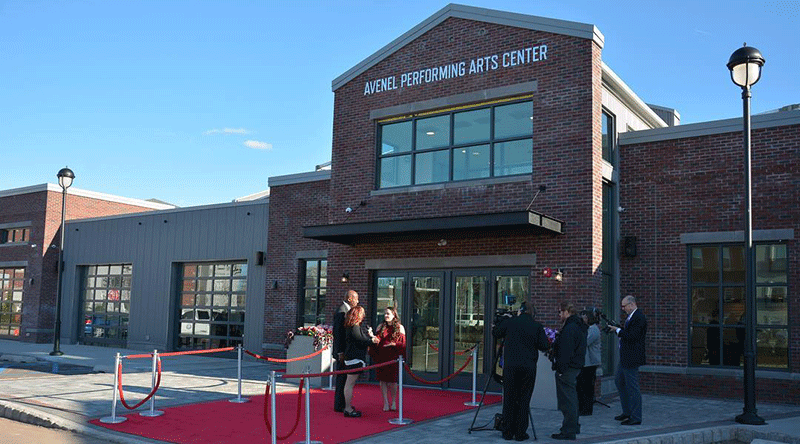 In recent years, Woodbridge Township has earned their reputation as a leader in redevelopment through a number of projects, ranging from mixed use housing to brand new manufacturing facilities. The Avenel Arts Village Redevelopment Plan is one of the older plans in this flurry of redevelopment, first outlined in 2007, and 12 years later it is finally coming to fruition. On Wednesday, April 10, the Avenel Performing Arts Center (APAC) welcomed the public to its grand opening, the paramount achievement of the 27-acre Avenel Arts Village Redevelopment Plan in Woodbridge Township. Constructed with brick veneer, metal cladding, wood, and glass as an homage to Avenel’s industrial roots, the 13,500-square-foot building can accommodate up to 225 guests and has multiple performance spaces. The redevelopment project, which is centered around the newly-renovated Avenel NJ TRANSIT Station, also includes the Station Village apartments (which opened in October 2017) and ample retail space.

The project is just one among the 50 redevelopment initiatives happening in Woodbridge Township. These efforts involve over 30 developers who are working on 6 million square feet of projects. The Avenel development however, holds a special place for many in the Township as the site has a storied history.

Woodbridge Township has a population of 102,000 within its roughly 25 square miles. It sits in an advantageous position at the intersection of the New Jersey Turnpike and the Garden State Parkway; the Metropark, Woodbridge and Avenel stations are also all within the municipality. The township features a wide range of land uses: remote industrial parks, a vibrant downtown, highway retail corridors. The site of the Avenel redevelopment was once a General Dynamics industrial plant; unused since 2000, it had fallen into a state of disrepair. The site required extensive environmental remediation after decades of exposure to toxic chemicals and heavy metals. As the Township contemplated what to do with the abandoned site, the Township’s Planning Board enlisted the assistance of Phillips Preiss Grygiel LLC in 2007 to study the area to determine whether it was an “Area in Need of Redevelopment.” Under New Jersey’s Local Redevelopment and Housing Law, municipalities may deem an area in need of redevelopment under certain statutory criteria that are established based on an investigation and recommendation from the Planning Board, which is then voted upon by the Governing Body of the municipality. If adopted, this gives the municipality the authority to conduct “clearance, re-planning, development, and redevelopment” of the area in conjunction with the adopted municipal redevelopment plan.

A mixed-use project was proposed as part of the consultant-prepared redevelopment plan for Woodbridge. The plan advised a project that “is not only consistent with the surrounding neighborhood context, but also takes advantage of its proximity to the adjacent Avenel train station.” It proposed the construction of 500 new housing units, the arts center, and an additional 25,000 square feet of retail/arts village support space. Additionally, the plan aimed to create a pedestrian-friendly development that would provide community gathering areas, a village green, and increased access to the train station. The results of the study led to Woodbridge declaring the area to be in need of redevelopment (January 2008).

The project had a series of stops and starts, with eight public meetings over two years devoted to making the case for a residential development on the lot, despite the extensive environmental cleanup it would require. This was followed by the economic downturn in 2008 which halted progress. In 2014, the Township’s Governing Body introduced an ordinance to borrow $7.93 million to purchase the site. A subsequent deal was made with After an extensive cleanup and demolition, Station Village Apartments opened in October 2017. The 500 units are a mix of 1-2 bedroom apartments and townhouses; 10 percent are dedicated to affordable housing. Currently, half of the units are constructed and occupied, with the rest slated for completion by 2020. NJ TRANSIT ridership data shows a steady increase in average weekday passenger boardings at Avenel Station, from 164 in fiscal year 2013 to 236 in fiscal year 2018.

The Avenel Performing Arts Center opened in April 2019, and has a slate of shows for its inaugural season, scheduled through October 2019. The space will include an on-site bar and restaurant, Curtains, which will feature a separate cocktail lounge and outdoor patio dining; it is scheduled to open this summer. The project was funded through a $6 million grant from Middlesex County—$1 million from the developer and $1 million from the Township also helped pay for the project.

Payment in Lieu of Tax agreements (PILOTs) also helped support development in the Township. PILOTs are an economic development tool under New Jersey’s Tax Abatement Programs, used to encourage commercial, industrial, and residential redevelopment in blighted areas that would otherwise not generate revenue or economic opportunities, due to factors such as contamination or access restrictions. They grant authority to municipalities to offer property tax exemptions over a set number of years to developers. Instead, developers pay a discounted annual service charge, incentivizing them to improve or construct new buildings in an area designated in need of redevelopment. Since 2007, Woodbridge Township has established over a dozen 30-year PILOTs, which provided 10 to 15 percent property tax discounts to commercial developers to spur growth. Mayor John McCormac has touted the success of these agreements.

“So much of what we are able to do, including our school projects for turf fields, tennis courts, tracks, gym floors, playgrounds and auditorium seating, as well as the investment in our township recreational facilities and road and park and other improvements, has been because of our efforts to attract new redevelopment projects, which provide millions of tax dollars,” McCormac said.

Several factors have allowed Woodbridge Township to become a paragon for successful transit-oriented development. One common criticism of PILOTs is that they do not require municipalities to share the tax revenue with the school district (and are only required to share 5 percent with the county). Woodbridge’s efforts to ensure the school district benefits from PILOTs has helped alleviate tensions that have occurred in other areas. While not currently required by state law, Woodbridge Township earmarks 25 percent of the PILOT revenue for the school district. This has funded school facilities that include turf fields, new tennis courts, and renovations to gymnasiums, as well as construction of the Ross Street Elementary School No. 11 and projects at Woodbridge Middle School. The PILOT projects to-date have not resulted in considerable enrollment increases to the school system, due to the size of units in the residential developments, which have been mostly one- and two-bedroom apartments designed to appeal to commuters who wish to live close to transit. Despite this fact, McCormac has said that the Township plans to reimburse the school district for the incremental cost of every school-aged child that the residential projects yield.

Additionally, the Township departments have worked to streamline the entitlement process through the creation of a Technical Review Committee (TRC), which invites businesses to come in several weeks before their hearing with the Planning Board to hash out details with town officials, preparing them for a smoother process once the hearing occurs.

The Avenel Arts Village has already spurred nearby growth, such as a new retail center, a Wawa, a QuickChek, and a renovated Avenel Pharmacy. The next phase of the project will involve filling the soon to be completed arts-themed retail space.

The Avenel project is not the only transit-oriented development on the docket in Woodbridge. Two projects currently in various stages of planning will be located downtown across from the Woodbridge NJ TRANSIT Station, Wick Co.’s Brook Street Lofts (a six-story 145-unit luxury apartment building located across the street from the train station) and Prism’s Heard Square (a five-story mixed-used building that includes retail space, 232 apartment units with 35 dedicated to affordable housing, and a community pool and patio. In addition, the Grande mixed-use development will open in 2020 at Metropark. It will feature 355 units within walking distance of the station, as well as retail space.

New Buildings Rise … and to Rise in New Brunswick

September 23, 2009 Steph_Admin Comments Off on New Buildings Rise … and to Rise in New Brunswick