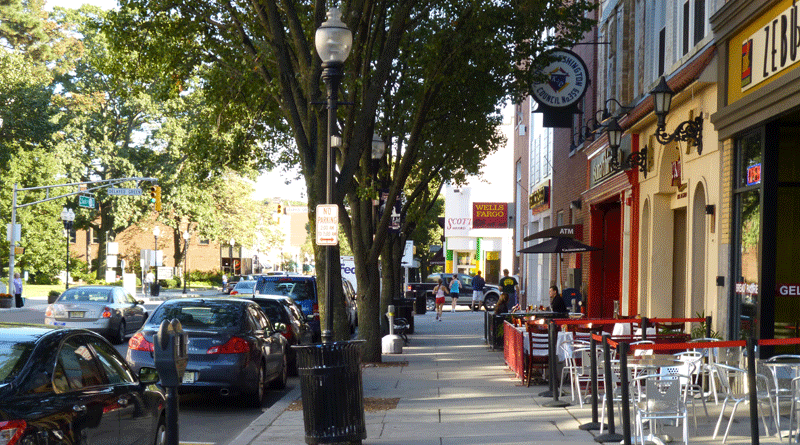 Disclaimer: The views, opinions, and positions expressed are those of the author alone and do not represent those of NJTOD.org, the Transit-Friendly Development Newsletter, NJ TRANSIT, the Alan M. Voorhees Transportation Center, or Rutgers, The State University of New Jersey. The accuracy, completeness, and validity of any statements made within this article are not guaranteed. We accept no liability for any errors, omissions or representations.

The trend toward transit-oriented development is certainly not new. In New Jersey, the presence of a train station is widely considered prerequisite to the creation of a successful destination community. And the numerous virtues of mass transit – such as reduced traffic congestion and improved quality of life for the corporate commuter – continue to drive demand for new residential and commercial development along public transportation corridors.

But not everyone who seeks out transit-oriented locales relies on mass transportation, and the success of a TOD cannot be measured by increases to train ridership alone. Particularly in suburban downtowns, the presence of a train station is, for many residents, an amenity far more than it is a necessity. New residential buildings in these communities still grapple with the need to provide adequate parking for residents that depend on their cars, despite living within walking distance of a train station.

For many municipalities, train stations are as much a catalyst for economic development as they are a means of transportation. Municipalities that focus on better placemaking and forge a relationship between the local forms of transportation and the creation of animated pedestrian experiences are more likely to become the next sought out places where redevelopment is most capable of flourishing.

Nowhere is this truer than in Morristown, where the presence of a train station positioned the municipality as a prime target for comprehensive redevelopment and revitalization. Over the past 10 years, Morristown has fundamentally transformed, benefiting from an influx of investment and the creation of hundreds of new residential units in the downtown, along with new retailers and restaurants to serve these patrons. As a result, it is no surprise that today’s office tenant seeks out Morristown as a desirable, beneficial location to set up shop.

And yet, as is the case with other New Jersey suburban downtowns, the residential base in Morristown does not necessarily look to the available mass transit as the underlying reason for choosing to live in the community. Instead, they are drawn to the vibrant, pedestrian-friendly and culturally rich environment within the downtown district. The train station is an integral component of this successful downtown, but it is a means to an end, serving as a catalyst for development that ultimately drives more interest and demand.

Creating the right pedestrian experience anchored by access to mass transportation requires an understanding of what is driving the lifestyle needs of modern residents and workers: efficiency. People no longer compartmentalize their lives to balance the demands of their jobs with their personal needs. Instead, technology and increased mobility have pushed the shift toward work-life integration, where the lines are increasingly blurred.

Today’s thriving transit-oriented developments are defined by this trend, whereby apartments are built with amenities and features to support work-from-home arrangements, and office spaces incorporate lifestyle services that enable workers to grab a coffee, get in a workout or meet up with friends without having to skip a beat on the job.

Key to an efficient lifestyle is the linkage between multiple transit options. Trains often serve as the anchor, but increasingly those embracing TOD are looking at other, complementary modes – including shuttle services and bike-share programs – that improve connections at transit hubs, support sustainable transportation, and, collectively, contribute to an overall seamless living experience. These additional transportation options also foster viable development farther away from train stations, linking buildings that fall outside of a TOD’s standard half-mile radius to the downtown district, without requiring use of a car.

In defining the desirable elements of mass transportation, it is critical to place special attention on the quality and experience of the transportation itself.  While the TOD talk tends to be mostly about trains, it’s imperative to focus on the countless municipalities whose main form of public transportation is bus or light rail.  The efficiency of the trip overall, the comfort and quality of the interior design, both of the vehicle and the station, and most importantly, the necessity for technology to enable the user to conduct business during the commute, are all factors that must be addressed as the growth in TOD trend continues.

Municipalities that embrace the core tenets of placemaking and prioritize the pedestrian experience are best positioned to create and sustain successful transit-oriented development.

To do this, municipalities must put the needs and wants of people first and satisfy their desires for rich and varied experiences that allow them to move easily between all aspects of their lives. Equally important is the creation of pedestrian-oriented services that link people to mass transit and support a walkable environment. To achieve these goals, municipalities must recognize the need for – and implement zoning that encourages – residential and commercial development that fosters work-life integration.

As municipalities look to provide conduits to facilitate redevelopment, it is vital that they embrace the creative design process offered through the legal pathway of the designation of redevelopment zones.  As developers seek to deliver the most suitable product, which in today’s world is defined by flexible, collaborative, and creative spaces, local administrations must respect the fluidity that the design process entails which can frequently not be met by outdated zoning.  The implementation of an effective transit-oriented development incorporates elements and considerations that cater to a variety of end-users.  The success of these redevelopments can only be achieved through an integrated public-private partnership, whereby both the developer and the municipality are able to succeed in their equitable end goal of creating a thriving, stabilized asset that generates not only much-needed tax ratables for the community but also supports a dynamic population invested in the success of the downtown.