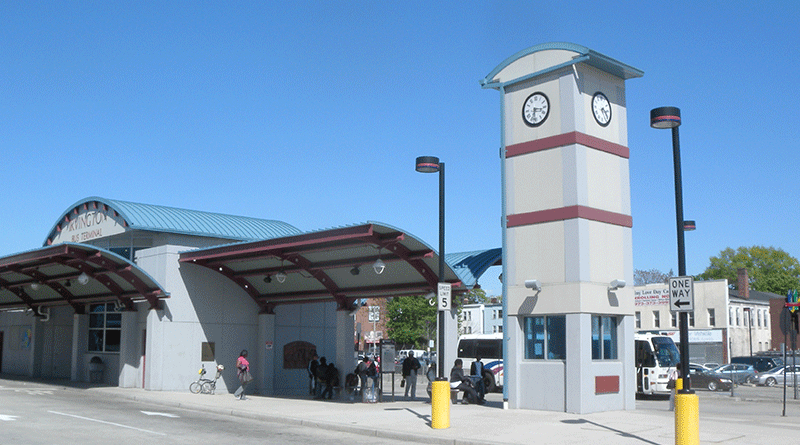 In July 2015 the New Jersey Department of Transportation designated the Borough of Park Ridge and the Township of Irvington as the state’s 29th and 30th Transit Villages.

Designation of Irvington, New Jersey’s 30th Transit Village, focuses upon the Irvington Bus Terminal, a major bus hub located in the township’s downtown. Irvington is the second bus-focused Transit Village in the program, the first being Pleasantville in Atlantic County. The bus facility is located in Irvington’s central business district between Springfield and Clinton Avenues, and within the Urban Enterprise Zone and the Irvington Springfield Avenue Business Improvement District.

The terminal, which dates to the 1940s, received an extensive renovation in 2004-2005. The $4.4 million project resulted in an enlarged building, wider bus lanes, and upgraded pedestrian connections to off-site parking. According to Irvington officials, the facility serves about 13,000 passengers and more than 450 bus trips each day, making the Irvington Bus Terminal the second busiest in NJ. The Irvington Bus Terminal provides access to ten distinct NJ TRANSIT bus routes. Passengers can ride the GO25, NJ TRANSIT’s enhanced bus route, and reach downtown Newark in 16 minutes and Newark Penn Station in 19 minutes. Route 107 provides passengers with a 35 minute trip to New York Port Authority Bus Terminal.  Passengers can also board buses traveling to many nearby communities including Belleville, Clifton, Bloomfield, Elizabeth, East Orange, Maplewood, Nutley, South Orange, and Union, and to Newark Liberty Airport.

Like all Transit Villages, Irvington anticipates adding to its residential options and growing its population. Currently, the Township is home to nearly 55,000 residents, having declined from more than 61,000 residents in 1980. Plans call for improvements to enhance the township’s attractiveness as a hub for business and for living. Efforts toward this goal have already begun. Last October, the Township held a public visioning meeting to help inform a comprehensive economic development strategy and Irvington’s effort to gain Transit Village designation. Public participation plays a significant role in both of these efforts. As Wayne Bradley, Director of Community Development and Planning, noted in a Township post advertising the event, “Mayor Tony Vauss is stimulating the conversation and actions about the Transit Village. Our residents, the Municipal Council, businesses, social service agencies are joining in developing the best strategy for investing in the Township. It is time to reverse the disinvestment in our systems. It takes planning and forethought to put funds where the need is greatest.”

Public input also played a role in the development of streetscape improvements planned for Springfield Avenue. Earmarked for federal funding in 2009, work on the Springfield Avenue Streetscape project is finally taking shape. Public involvement has led to a project that will improve signage and address pedestrian safety issues. Upgrades will be made to curbs, sidewalks, lighting, benches, and bus shelters between Clinton Avenue and Civic Square. According to Mr. Bradley, the project is nearing the end of its design phase and construction should commence in Spring 2016.

Interest in downtown office space is evident. Novus Equities recently purchased mid-rise and high-rise office buildings located at 40 and 50 Union Avenue, one block from the Irvington Bus Terminal. According to Mr. Bradley, Novus Equities and the Township have been exploring ways to invigorate the transit village area and extend pedestrian improvements to Union Avenue and Nye Avenue. Additionally, the Planning Board has approved new commercial retail spaces on or one block off Springfield Avenue in the Transit Village and approval for similar spaces in this location is anticipated by the end of 2015.

Health Impact Assessment (HIA) for Planners: What Tools are Useful?

December 20, 2012 Steph_Admin Comments Off on Health Impact Assessment (HIA) for Planners: What Tools are Useful?